Home Eye on Europe All Eyes on Orbán

Manfred Weber’s decision to back the European Parliament’s censure of Viktor Orbán, a member of his own EPP political group, could spark a political realignment that creates the most powerful far-right movement in Europe since World War II. 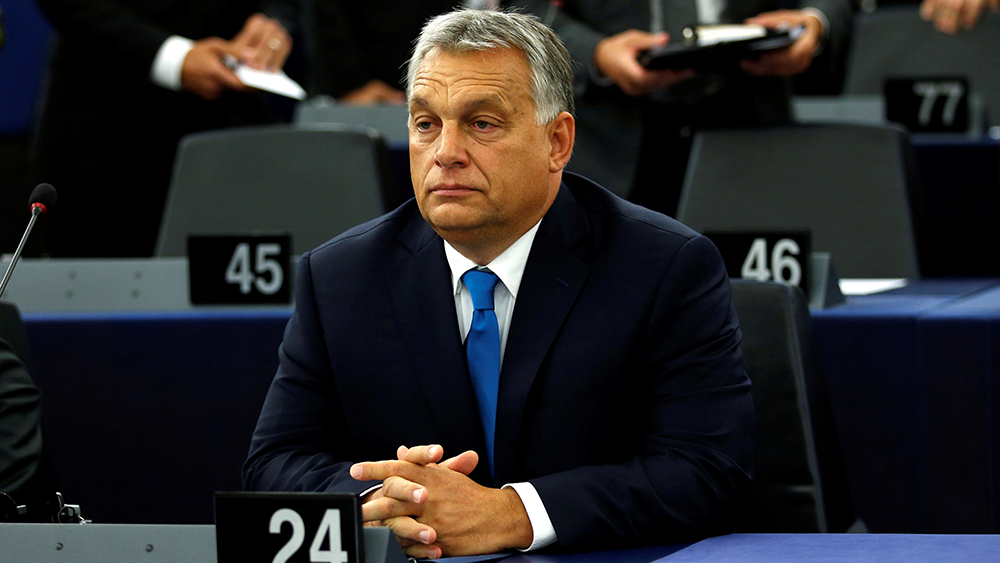 Opponents of Viktor Orbán’s brand of self-described “illiberal democracy” were cheering yesterday when the European Parliament voted to start a process stripping the Hungarian government of EU rights unless it stops its rule of law violations.

But behind the scenes, many within Europe’s mainstream conservative parties are worried that the vote may have just unleashed a monster. Depending on what happens next, yesterday’s vote could kick off a chain reaction that neuters Angela Merkel on the European stage and creates the most powerful far-right movement in Europe since the end of the World War II.

In other words, a development which is the exact opposite of what those cheering yesterday’s vote want to see. All eyes are now on Orbán to see how he will react.

To understand what’s coming next, we need to understand how we got here. This week’s invocation of Article 7—an emergency procedure designed to safeguard basic protections for democracy and civil liberties—is not a response to recent developments. Orbán has been dismantling democratic institutions in Hungary since his Fidesz party won a supermajority in the Hungarian parliament in 2010. What has changed is Orbán’s ambitions.

Last year the Article 7 process was set in motion for the first time in EU history against Poland’s Law and Justice (PiS) government, a close ally of Fidesz that is also dismantling democratic, judicial and media institutions. Law & Justice is not part of the EPP, it is instead part of the European Conservatives and Reformists (ECR), a euroskeptic group founded by David Cameron and the British Conservatives in 2009 as a break-away from the EPP.

But all attempts to censure Hungary for similar behavior were blocked by the EPP and its leader, Manfred Weber, who has tried to serve as a bridge-builder and keep the group together.

So what changed? It was Orbán’s behaviour. Now that he has consolidated his untouchable power in Hungary—solidified in April in an election OSCE observers said was based on “intimidating and xenophobic rhetoric, media bias, and opaque campaign financing”—he has set his sights on Europe.

Orbán has given speeches in recent months calling on the EPP to move further to the right and embrace his fight against liberal democracy and multiculturalism. He has not-so-subtly suggested that if it doesn’t, he will look for political allies elsewhere. He has publicly disparaged CDU leader Angela Merkel and developed close ties with her critics, particularly Horst Seehofer, the head of her Bavarian sister party the CSU. He has also been courting Austria’s chancellor Sebastian Kurz.

Meanwhile, he is developing a clear alliance with Poland’s PiS and Italy’s Lega, both of whom are not in the EPP.

The fear until now has been that that if the EPP angered Orbán by voting for Article 7, he would leave the group and take his 12 MEPs with him. He might also take other countries’ MEPs. There has been speculation that Kurz’s Austrian People’s Party (ÖVP) might leave with him. There have even been whispers that the CSU might leave with Orbán to join a new party—something that would most likely cause the German government to collapse.

With such dangerous possibilities, the EPP had calculated that the risk of invoking Article 7 was too great. “He may be a bastard, but for the moment he’s our bastard,” an EPP staffer once said to me, quoting Nixon.

That calculation changed when Orbán seemed to be suggesting that he will leave the group anyway before next May’s European Parliament election. His demands for the EPP to lurch right were unacceptable to the group’s leadership.

And so, the EPP decided to call Orban’s bluff—betting that despite the prime minister’s bluster, Fidesz does not want to leave the largest political group in Europe.

But it is a bet few in the EPP feel confident about. In the parliamentary halls in Strasbourg this week, there are whispers that Orbán may be about to leave, possibly within days.

What seems more likely is that he will bide his time for now and start courting various forces on the European right about the possibility of forming a new political group to the right of the EPP. Such a group could be formed in the next seven months to be ready for the European election, or he could wait until after the election to see the relative strength of each party in terms of number of seats.

Given his stated eagerness that this election be fought on ideological federalist vs nationalist grounds, it seems likely he would want his new alliance in place before the election – to give voters a clear choice.

Orbán has two options. He can start a brand new group, or join the existing ECR. Both are fraught with complications.

There are currently 12 recognized “europarties.” In order to be official, a party must have received at least 3 percent of the votes cast in at least seven member states in the last European Parliament elections. Attracting the requisite number of parties from the requisite number of countries might be difficult for Orbán if he wants to start a brand-new europarty—and would probably require the ECR to disband. The requirements for forming a corresponding group in the parliament are even more stringent.

Given that the ECR was founded by the Tories, and the United Kingdom, post-Brexit, won’t be in the next European Parliament, the ECR’s continued existence has been called into question. But PiS, the only party in the group other than the Tories of any significant size, insist they want to keep the ECR alive.

For this reason, it might be easier for Orbán to join the ECR, with the tacit understanding that he would remake the group in his own image as its ideological leader. Without the Tories the ECR will be completely dominated by his Polish allies, so this would be a logical step.

It’s fair to assume that Orbán’s new partner Matteo Salvini would bring his populist Lega party into the fold, and Five Star might also be convinced to join (they were previously in Nigel Farage’s EFDD group, expected to be retired after this term). The ECR already counts the Sweden Democrats, the Danish People’s Party, the True Finns, and N-VA as members, and until recently Alternative for Germany (AfD) was also in the group.

It’s also conceivable that France’s Front National and the Netherlands’ PVV may want to join the new group. Finally there is the big question—would Austria’s ÖVP and Germany’s CSU leave the EPP to join? And would other EPP members follow?

Were such a group to be formed, it would include governing parties of Italy, Poland, Belgium, Austria, and Hungary, and the important opposition parties of France, Sweden, Germany, and the Netherlands. In other words, the political group founded by the British Conservatives in 2009 would become the most powerful far-right political movement in Europe since 1945.

This is the doomsday scenario the EPP has been terrified of these past years. It is the reason they turned a blind eye to Orbán’s transgressions for so long. But in the meantime, his reputation on the European stage has only grown.

During the parliament’s debate on the Article 7 resolution on Tuesday, the chamber was overwhelmed by far right and euroskeptic MEPs, many of whom normally don’t show up to the plenary, heaping praise on the Hungarian leader. Several called him a “leader.”

It was clear that the debate was not about Hungary at all. At this point, it is about the future of Europe. And about one-third of the current European Parliament views Orbán as their ideological hero.

The future of Europe depends on what Orbán decides to do with this adoration.