Home Eye on Europe Can Europe’s Center-Right Handle Orbán?
Conservative parties across Europe are struggling to answer the challenge posed by populists. Ahead of EU elections in May, that struggle is especially acute for the European People’s Party: it is facing a major test within its own ranks. 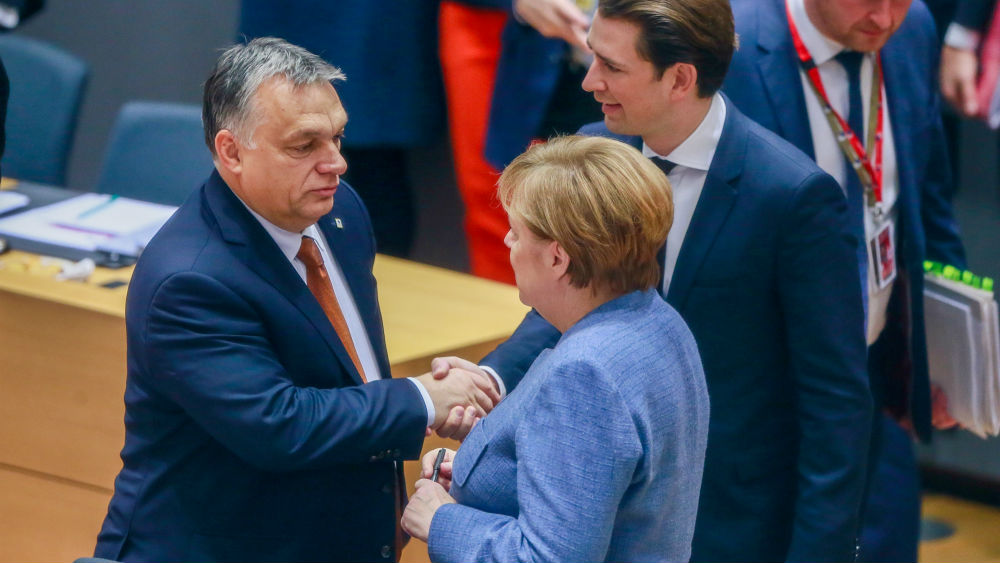 The EPP was keen to display unity at the congress as it heads into the European Parliamentary elections next May. The gathering followed months of speculation over whether the EPP could split after the election, with some liberal-minded deputies joining a yet-to-be formed alliance with France’s president Emmanuel Macron, and whether Orbán and his ruling Fidesz party would leave to lead their own alliance with other like-minded European nationalists.

The EPP has had an Orbán problem for years. The Hungarian premier has been systematically undermining rule of law and democratic values in Hungary, and challenges those same fundamentals in the European Union. Ongoing demonstrations in Budapest for independent media and courts, and against a labor law increasing overtime hours, will cause further headache for Europe’s largest political alliance. This week, opposition MPs were violently thrown out of the public media’s headquarters in Budapest, the central propaganda-machine for Orbán, after they vowed to read protestors’ demands on air. Orbán, who has never faced political consequences on the European level for his actions, is unlikely to back down, putting the EPP in an uncomfortable spot.

The EPP is the powerhouse party in Brussels and much of Europe. Its politicians head the three most important institutions in the European Union and command seven governments in the (still) 28-member EU, plus they hold the Romanian president’s post. The EPP has sheltered Orbán for years, with the party’s president Joseph Daul, an influential French politician, amicably referring to Orbán as the party’s “enfant terrible.”

Initially, EPP members were arguing that keeping Orbán close would tame the Hungarian prime minister, who likes to see himself as a “street-fighter,” and curb his autocratic tendencies. It set out what it called “red lines” over Orbán’s targeting the Central European University in Budapest, but failed to act when the CEU did decide to move to Vienna as the Hungarian government refused to secure its future in the Hungarian capital. Despite mild EPP criticism, Orbán kept running his anti-EU, anti-liberal, anti-migration campaigns, and continued to centralize power back home. Liberal-minded EPP members in the European Parliament grew increasingly annoyed with the lack of disciplinary action, and saw Orbán as a dangerous pull for EPP to the right.

The frustration with Orbán boiled over last September, when the majority of EPP members in the European Parliament, including its leader, Bavarian Manfred Weber, who is running for the presidency of the EU commission, voted to launch a sanctions procedure against Hungary under Article 7 of the Lisbon treaty for breaching EU rules and values. But the procedure is unlikely to lead anywhere, as deciding on biting sanctions depend on fellow member states reluctant to challenge each other’s internal measures.

Despite calls to kick Fidesz out, the EPP party leadership refused to tackle the issue, arguing that according to the party rules, seven member parties from five different member states need to come forward with a request. No such request has been made. Petteri Orpo, the leader of the Finnish National Coalition Party, tentatively said that if there were other six parties, his group would join in calls for Fidesz’s expulsion.

Orbán isn’t hiding his intention to pull the EPP to the right either. He made it clear in a speech in June 2018 that he does not want to leave the EPP and create what he called a “successful anti-immigration” party, but rather he wants the center-right alliance to turn his direction and return to its “Christian democratic roots.”

He argued that the EPP could either become a flavorless, colorless party stuck in an anti-populist coalition with the social democrats and liberals, or move to the right and continue shaping EU politics. “The other model which has been successfully tested in Austria and Hungary is taking up the challenge, is not creating such a people’s front, is taking the issues raised by new parties seriously, and is giving responsible answers to them,” Orbán said at the time.

The EPP attempted to portray itself in Helsinki as a united political force that can stop the threat of extremist and populism in Europe. Yet speakers at the congress were more interested in rallying EPP members against their socialist and liberal contenders than populists. The party leadership also knows that Orbán will deliver at the ballot boxes. His party alliance is expected to win well over a dozen MEPs to the party in May’s election, much needed by the EPP, which could lose 30-40 seats, according to projections.

Orbán argued at the party should respect winners. “What is even more important to understand: we have to win, not just survive, and victory must be wanted. Let us not listen to our opponents, and let us not measure ourselves by the standards of the leftist parties and the liberal media. […] The European elections must be won at home, in each of our countries. In order for the EPP to become the party of the winners again, we need winning prime ministers,” he told delegates.

EU council president Donald Tusk retorted in his speech following Orbán: “We all want to win the upcoming elections. But let us remember that at stake in these elections are not benefits and jobs, but the protection of our fundamental values. Because without them, our victory will make no sense.”

The most recent EPP argument for not stepping up criticism of Orbán cites Brexit. Party officials argue that the Brexit process really started when British Conservatives, led by David Cameron, left the EPP and formed their own group in 2009. This started the UK’s drift away from the EU core, they say. The same could happen with Hungary if Orbán is put under more pressure. Meanwhile, EPP president Daul insists on keeping the party as large and wide-reaching as possible. The continued support for Orbán’s autocratic measures will nevertheless further encourage the Hungarian leader. It might also signal an EPP shift to the right during and after the European elections.