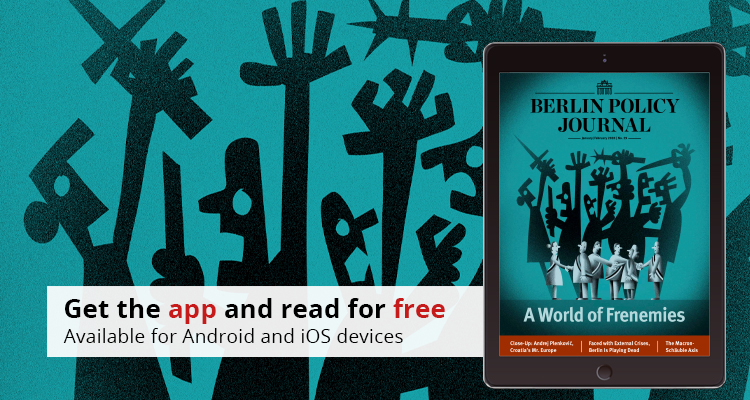 A World of Frenemies

Caught in the Headlights

Germany’s foreign policy foundations have suffered multiple shocks since 2014. But Berlin’s only answer is to play dead.

Germany and Europe need to learn the rules of geo-economics.

As the US and China face off technologically, analogies with the pre-1989 era are misleading.

Croatia is taking over the rotating EU presidency for the first time. Its prime minister is a dedicated “Mr. Europe,” but trouble looms.

The Four Camps of the New Climate Debate

The Golden State is a tech and environmental superpower.  Europe should pay more attention to Sacramento.

Chinese workers on BRI projects often spend most of their time away from their families. In Kyrgyzstan, some see a silver lining.

The Dangers of Herd Life

Ideas of human nature posited by the European Enlightenment are confronted with a Chinese countermodel.

There’s a problem with academic writing and communicating.