For many in the newly renamed country of North Macedonia, French President Emmanuel Macron’s decision to block EU accession talks was a “betrayal.” 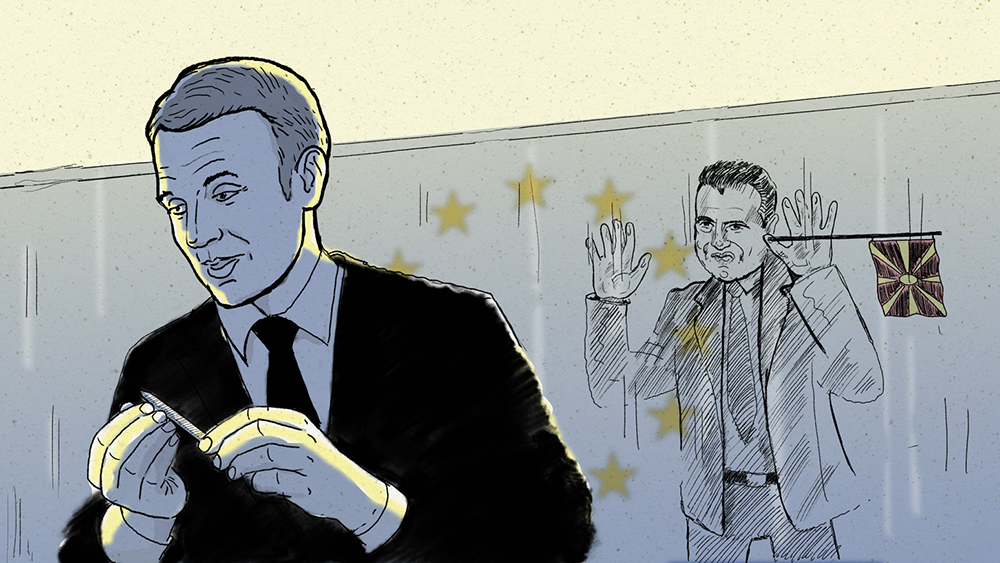 It should have been a done deal, or so most people thought in the recently renamed country of North Macedonia. After all, the country had finally settled a long-running dispute with Greece over its name, meeting Brussel’s key condition for EU accession.

But then Emmanuel Macron said “No.”

Disbelief, frustration, anger, even rage screamed off the pages of media outlets for weeks following what was widely viewed as the French president’s historic mistake. EU Council President Donald Tusk even told his “Albanian and Macedonian friends” that “you did your share and we haven’t.”

Beyond the initial response, what lingers is a sense of betrayal. “I am breaking inside,” Prime Minister Zoran Zaev told the New York Times on November 19, 2019. “This destroyed me personally, psychologically,” Zaev added, underlining his concern about the future stability of the Balkans. “Nationalism and radicalism can rise again,” he said. “There is a risk to open conflicts inside of the countries again. Also to open conflicts between countries again.”

Stuck in the Waiting Room

Macedonia had been waiting for a “Yes” from the EU for a long time. It’s actually been waiting longer than anyone in the Balkans, given it was the first country in the region to start the bid for EU membership, in 2001, before Croatia. Yet the country has been stuck in the EU waiting room.
In 2009, when the European Commission first gave its recommendation that accession talks should start with the then Former Yugoslav Republic of Macedonia, or FYROM, the proposal was shut down by Greece.

Over the following years, Athens repeatedly ensured that the European Commission’s proposal remained just a piece of paper, blocking any attempt by Skopje to launch talks. Every time, Athens raised the same objection: “FYROM” had to settle the name issue first. Greece played the same blocking role at NATO: the alliance told Skopje in 2008 that it was welcome to join once it settled the name issue.

The fact that Athens was allowed to keep Skopje in limbo was seen as unfair and unjust by many Macedonians. Why should the country change its name only because Greece demanded it? And why are other countries allowing such behavior? This sense of betrayal played into the hands of the former Prime Minister Nikola Gruevski, now a convicted fugitive residing in Budapest.

Gruevski stoked tensions at home and abroad, fueled narratives about domestic and international enemies, started a massive revamp of the capital in neoclassical style that ended up costing over €600 million of taxpayers’ money, erected a huge monument of Alexander the Great in the main square, clamped down on critical media and civil society, and packed state institutions with party members. As the EU put it in 2016, he carried out “state capture.”

Following dramatic opposition press conferences that revealed the illegal wiretapping of 20,000 people over many years—and sizable, sustained protests—the country got a change of power in 2017. The new government was eager to resolve the name issue and unblock EU integration. A year later, in mid-2018, a deal was signed with Greece to rename the country to North Macedonia. The agreement was praised all over the world as a success story for conflict resolution.

Yet for North Macedonia’s government, the political cost was high. Already in 2017, they had barely escaped alive when an angry nationalist mob stormed parliament and attacked them. One year later, they had to make political concessions and—to the public’s dismay—grant amnesty to the same MPs (the VMRO DPMNE nationalist opposition) who had opened the doors for the violent mob. This was the price to pay for getting a two-thirds majority to approve the name-change deal with Greece.

Once the law was passed, NATO immediately started procedures to invite Skopje to take its seat as the 30th member of the Alliance. The EU was set to deliver a decision to start talks in October 2018, but that decision was first moved to March 2019 and then delayed again to October, when Macron said no, arguing that the Union had to sort out internal issues before expanding any further.

So where are we now? The political establishment led by the Social Democrats has been betrayed by its foreign partners, who had repeatedly assured them that Macedonia would start negotiation talks. The government had no other option but to call early elections for April 2020.
These are the same leaders that pledged to uphold EU values and restore rule of law, freedom of the press and liberate state institutions from party influence. They have now been forced by the EU to face new elections and bear responsibility for the broken promises. Their approval ratings have fallen since Macron’s “No,” which reinforced perceptions that the government wasted its two-and-a-half years in power by banking heavily on the EU integration process instead of focusing on reforms at home.

The EU is saying that it will have another discussion on enlargement in March, following French proposals for changes in accession methodology. If the EU decides again not to open accession talks, it would further fuel narratives of nationalism and reignite attempts by North Macedonian politicians to replicate the “successes” of leaders like Viktor Orbán, Recep Tayyip Erdogan, or Vladimir Putin.

Whether this government can stay in power or not, the end of the EU accession process would increase the temptation for any political leader to seek authoritarian rule—and arguably make this easier to achieve. Without incentives and pressure from Brussels, the weak internal system of checks and balances would not have the power to stop state capture.

If the EU carrots disappear, all that remains are the local sticks, and that cannot lead to anything other than a malfunctioning system, one thriving on corruption and nationalism and resistant to any kind of reform. Predavstvo could be followed by something worse.