According to insiders, Donald Trump threatened to pull the US out of NATO at a testy Brussels summit. The alliance is on shakier ground than ever before. 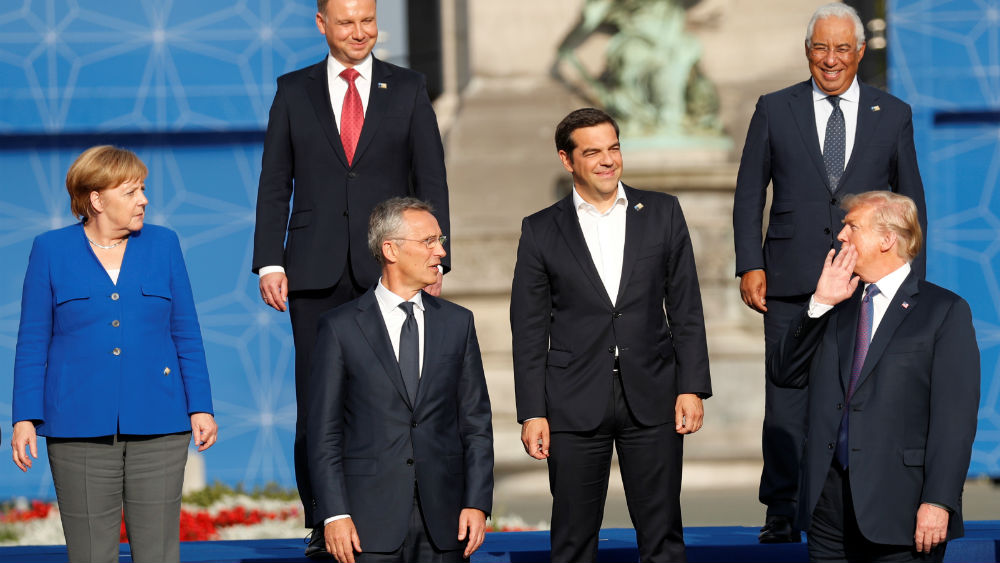 By the end of this week’s NATO summit in Brussels, it wasn’t just European leaders who were leaving with negative feelings about America. Even the European journalists covering the summit left flummoxed and frustrated.

“Why do we have to put up with this?” one asked me. “I am so sick of America. Trump comes here and humiliates us and there’s nothing we can do about it.” Even the White House press corps, he complained, was granted a sizeable area in the summit’s press room, cordoned off from other media—the US was the only country with such a reserved space.

Indeed, the press seating arrangements seemed to mirror the general power dynamics in NATO itself. It is viewed by many not as an alliance of equal members committed to defend each other, but as an American military protectorate over Europe. Trump, breaking decades of protocol, acknowledged this on Wednesday morning during a fiery breakfast with NATO Secretary General Jens Stoltenberg. “We’re supposed to protect you against Russia but they’re paying billions of dollars to Russia and I think that’s very inappropriate.”

Trump was referring to Germany, and Berlin’s approval of a new pipeline to import Russian gas. Washington, and many others, say this will increase Europe’s energy dependence on Russia, and they should instead import US liquefied natural gas. “Germany is totally controlled by Russia,” Trump said, before citing a markedly incorrect figure for how much gas Germany already imports.

It was an unprecedented public display of aggression by a US president toward the NATO allies, and it was a humiliating blow to Merkel. When she arrived at the summit later, she told press that as someone who grew up in East Germany—a country that really was controlled by Russia—she is glad that a unified Germany is independent today.

Trump’s comments sparked such discord that he and Merkel hastily arranged a joint appearance before the media. Trump insisted that he has a great relationship with Merkel and relations between Germany and America are the best they have ever been. Merkel did not look convinced.

It is a tactic Trump uses often – attacking and then later insisting no attack was made. He did it again during his visit to London on Friday, criticizing Prime Minister Theresa May in an interview with The Sun tabloid newspaper and saying her rival Boris Johnson, who just quit her cabinet, “would make a great prime minister.” He later walked back his statements during a damage control joint press conference with May.

But his biggest lurch in tone came on Thursday. Around midday, reports emerged that Trump had threatened to pull the United States out of NATO unless countries immediately increased their military spending. Stoltenberg hastily convened an emergency meeting of the 29 NATO members to try to come to a solution. Trump then called an unscheduled press conference, where he said he had successfully strong-armed the Europeans into committing to spend more on their military. He was asked three times if that involved making a threat to pull the US out of NATO, but he didn’t answer.

“We have now got it to a point where people are paying a lot more money,” he said. “And if you talk to Secretary General Stoltenberg, he gives us total credit, I guess that’s me. He gives me total credit. Everybody in that room by the time we left, got along and agreed to pay more.”

Except they didn’t. French President Emmanuel Macron quickly contradicted Trump’s assertion, saying NATO members made the same commitment agreed at the 2014 summit in Wales – to aim to increase military expenditure to two percent of GDP by 2024. Inside the room, Trump had demanded that this be increased to four percent – even though the US itself doesn’t spend this amount. The other leaders said this was not only impossible, it would also be ill-advised to throw so much money at their militaries so fast.

For the rest of the afternoon, in press conference after press conference, prime ministers had to find diplomatically creative ways of saying Trump lied, without actually saying it. Asked repeatedly why Trump had made the claim that Canada will be doubling its military spending, Canadian Prime Minister Justin Trudeau repeatedly pointed out that Canada is increasing its military spending by 70 percent over the next ten years.

Nobody wanted to incur the wrath of the US president by calling out his untruth. In a particularly creative attempt, Belgian Prime Minister Charles Michel offered that it might be a question of differing interpretation.

It was a display of just how fractious the nearly 70-year-old alliance has become, and it had a lot of journalists asking why Europe should continue to put up.

In the short term, the answer is clear: Europe has relied on the NATO military protectorate for the last seven decades, spending little on their militaries and instead investing that money in generous welfare and healthcare systems. Even with the end of the Cold War and the supposed end of the Russian threat, nobody other than the French was suggesting that this arrangement might not make sense in the future.

The NATO system makes Europeans completely dependent on the goodwill of the United States to guarantee their protection because they would not be able to defend themselves from a Russian attack.

The EU has now launched a defense union, which got underway in earnest this year. But it will take years to develop to the point where it could actually serve as an effective coordinator of Europe’s militaries in the event of a conflict without American assistance.

The UK remains adamantly opposed to the EU Defense Union because they say it undermines NATO. But Britain is on its way out of the EU, and London can hardly object to the enhanced cooperation now.

But what exactly did Trump say on Thursday? Most accounts point to the president saying: ‘If you don’t increase your spending, then America may go it alone.’

Some officials have cautioned not to read too much into that, and that Trump may not have understood what he was saying. This is the interpretation that European leaders have chosen to accept, in public at least. Macron insisted that there had been no threat to pull the US out.

In private, officials acknowledge that this was obviously an implicit threat. The implications are serious. If the US did pull out of NATO, the alliance would become a hollow shell. The US is, obviously, the largest pillar, and Trump’s comments caused understandable alarm. A US exit could leave Europe relatively defenseless overnight.

Like most NATO summits, this ended with few tangible outcomes. Conclusions regarding increased military spending remained unchanged from the Wales goal – something most of the NATO members are well on their way to reaching.

In past years, these annual summits of NATO leaders have become more about putting on a display of unity and power, a message to the world, and particularly to Russia. But this year’s gathering highlighted the exact opposite, putting NATO’s weaknesses and serious divisions on full display.

And those divisions will be brought into sharp relief as President Trump meets Russian President Vladimir Putin in Helsinki.