Home Eye on Europe Young and (Not So) Free?

Euroskeptic parties and illiberal forces are gaining traction among young Europeans, according to a recent survey. The European Commission hopes throwing more money into the Erasmus program will help. 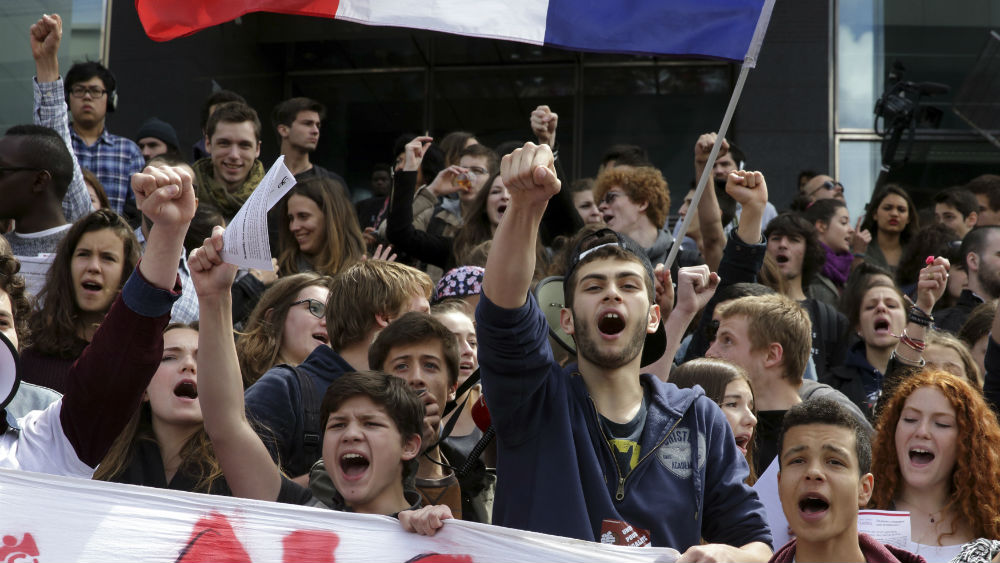 It seems young Europeans have caught the Euroskeptic bug, too. According to a survey released in early May by polling institute YouGov, three out of four young Europeans think the backbone of the European Union is economic cooperation, not shared values. More than one in three think the EU should return powers to the national level, particularly in the UK and Greece. A common European culture, on the other hand, resonates little with the young – only 18 percent say there is a shared cultural basis for Europe.

The poll, commissioned by Germany’s Hanover-based TUI Foundation, surveyed some 6,000 young people between the ages of 16 and 26 in France, Germany, Greece, Italy, Poland, Spain, and the UK on their attitudes towards Europe.

Troublingly, only a little more than half – 52 percent – of young Europeans think democracy is the best form of government. Fewer than half in France (42 percent), Italy (45 percent), and Poland (42 percent) are convinced that democracy is the best way to run a society; these are all EU countries where establishment politics have been shaken to the core in recent elections, and forces deeply critical of liberal democracy have gained strength in the last few years.

In France, far-right Marine Le Pen finished as runner-up in last year’s presidential election, and while staunchly pro-EU Emmanuel Macron defeated her, his presidency is not a guaranteed bulwark against nationalist sentiments. Italy’s national election in March upended the country’s political system as well, with the far-right Lega’s Matteo Salvini fast becoming a rising political star in the debt-ridden country. Meanwhile Poland’s ruling nationalist Law and Justice party (PiS) is at loggerheads with Brussels over what critics see as serious breaches of rule of law.

It is perhaps no surprise that the majority of respondents in Greece (66 percent), Germany (62 percent), and Spain (57 percent) still think democracy is the best form of government: The two southern countries emerged from dictatorships in the 70s and Germans overcame both the Gestapo and the Stasi. Young Germans on a whole place more trust in the EU than young respondents in the other countries.

While peace is still a core value of the EU in the eyes of many young Europeans, especially Germans and French, the value-based European project of integration is no longer a given. Young people are just as skeptical about their own future, democracy, and Europe, as the rest of society. More than half of them expect things to take a turn for the worse and believe their living standards will be lower than their parents’ level.

But what does Europe actually mean for young Europeans? For youth in the UK and Poland, Europe is mostly geography; Europe as formed by the EU, and its member countries, is most commonly perceived in Italy and Spain. As for shared values, among 40 percent of young people associate human rights with the EU, while 31 percent think democracy is a core European value.

Interestingly, 80 percent of young Europeans are in favor of sanctioning EU member states that violate human rights, and 79 percent supported penalties for the violation of democratic principles. Even Poles agreed, albeit to a lesser extent – and that despite the fact that their own country is under EU scrutiny for violating rule of law standards.

Only one in five European youth thinks his or her country should exit the bloc. However, it is telling that a significant number of young people in Greece (31 percent), France, and Poland (20 percent) are in favor of leaving the EU. In Spain and Germany only 12 percent would vote to leave the union.

The political dynamics of globalization translate clearly among young people too: Those who are skeptical of the European project see globalization as more of a threat than a boon – only some 28 percent of Euroskeptic youth polled said they believed globalization presented an opportunity, compared to 53 percent of EU supporters.

This dichotomy is driving change in the West, dismantling the traditional left-right division the political landscape and giving birth instead to the open-closed binary of politics. The poll suggests this is not a glitch in time, but an historical trend.

In Brussels, the European Commission has registered the problem and is keen to engage young Europeans more intensively. In its proposal for the next EU budget set to start in 2021, the Commission wants to double funds for the Erasmus+ student exchange program to 30 billion euros. It also plans to spend 700 million euros over seven years to support Interrail train passes for young people in the hope that more traveling will make them committed to upholding the European project. The EU executive also wants to spend more than one billion euros on the European Solidarity Corps, an initiative that supports young people volunteering in European projects.

Presenting the new EU financial plan, budget commissioner Gunther Oettinger called the proposal to double Erasmus+ funds the “right answer to populism and euroskepticism.” But it fails to address how these funds will succeed in engaging skeptical young Europeans – those who are less open, less inclined to travel, and not proficient in different languages. A 2016 Eurobarometer survey showed that fewer than one in ten young Europeans has volunteered abroad. Another 2016 survey found that a large majority of young Europeans (61 percent) do not want to study or work in another EU country, compared to only 32 percent who would.

The YouGov survey however suggests that it is not only the European project that needs an overhaul, but democracy, too. One will not survive without the other.