Accentuating the positive at their recent meeting, German Chancellor Angela Merkel and Russian President Vladimir Putin seem ready to let bygones be bygones and go ahead with the Nord Stream 2 pipeline project in the face of US opposition. 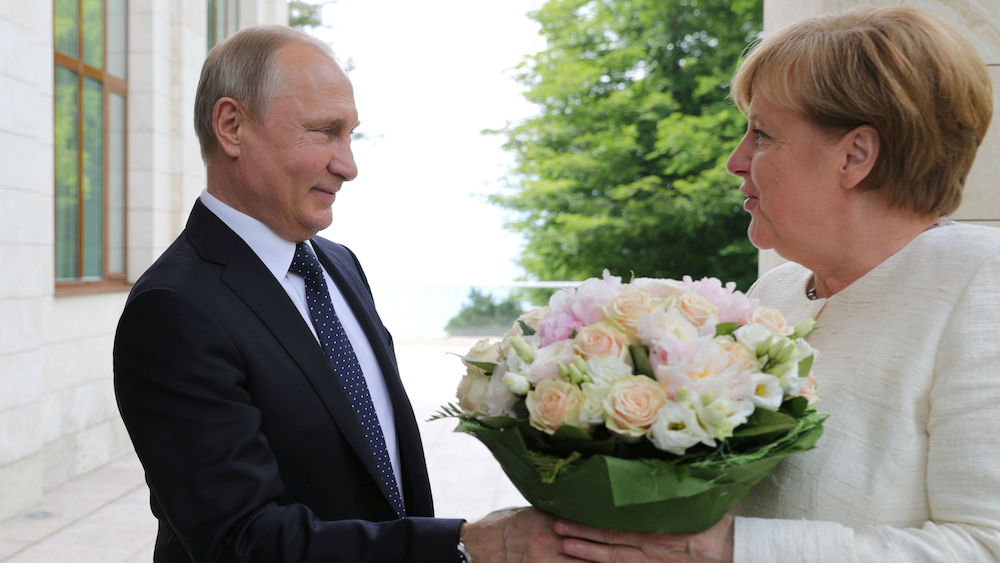 Politics, they say, makes for strange bedfellows. After 13 tense years knowing each other, it’s hard to imagine Angela Merkel and Vladimir Putin engaging in political pillow talk. The two speak each other’s languages but their leadership styles—and goals—couldn’t be further apart. But in the Black Sea resort of Sochi this week, Russia’s president welcomed the re-elected German chancellor to his summer residence and both made an effort to accentuate the positive.

At a joint press conference after talks on Friday, Merkel and Putin made clear that pragmatism was the order of the day. Their countries’ bilateral interests outweigh the differences and, increasingly, they find themselves united against the Trump White House.

Four years ago bilateral relations dipped below freezing point after Russia’s annexation of Crimea and the wider Ukraine conflict. In all-night talks, Merkel took the lead in Western diplomatic efforts, facing down Putin in Minsk to produce a peace process named after the Belarussian capital.

That roadmap remains fragile but not even regular violations of its terms are enough to hold back a thaw as summer approaches. The Russian president welcomed Merkel with  pink and white roses. Merkel came empty-handed, but bearing with a diplomatic bouquet.

“We have a strategic interest in having good relations to Russia,” said Merkel. Serious, ongoing policy differences that were obvious from their “open exchanges” did not mean the two countries did not have “areas in which we are completely of one opinion.” On her wavelength, Putin said “differing analyses of this situation or that” did not alter how Germany remains a “key partner” for Russia. “Solving problems is not possible when one does not engage in dialogue with one another,” he added.

Though ongoing disagreement over Ukraine featured in their talks, their joint press conference made clear that it has been displaced by more pressing problems. The American decision to disown the Iran nuclear deal, Merkel said, was no reason for the rest of the world to walk away from a agreement that, though not perfect, offered more control, security, and transparency than no deal. “It would be becoming for Iran to say now, ‘we want to continue to observe this obligation,’” she said.

With a typically wily flourish, Putin invited Syrian leader Bashar al-Assad to his Sochi residence a day before Merkel. At the press conference with his German visitor Putin called on Western countries to make a greater effort on the humanitarian front in the war-torn country. European leaders counter such calls by saying Russia, as his main backer, should bankroll any reconstruction effort. As long as Assad is president, they have refused to provide anything more than humanitarian assistance to Syria.

Perhaps the greatest show of unity between the two leaders was in facing down US criticism of the Nord Stream 2 pipeline. This is the second pipeline, currently under construction, to carry Russian natural gas to Germany under the Baltic Sea. It follows the first Nord Stream pipeline that opened in 2011. Ukraine fears an alternative route for Russian gas will see a drop of deliveries through its territory, opening the door to further energy standoffs with Moscow and a subsequent fall in transit charges which comprise around 4 percent of Ukraine’s annual budget.

Merkel insisted gas delivered must continue through Ukraine while Putin declared the project, controlled by the state-owned Gazprom concern, as an economic not political project. Russia would continue these deliveries, he said, “as long as they make economic sense and sense for all involved”.

Trump administration energy experts in Berlin on Thursday called Nord Stream 2 “a bad idea … from a geopolitical perspective” that was “potentially … an elevated sanctions risk.” Sandra Oudkirk, deputy assistant secretary of state for energy diplomacy, said Russian guarantees to keep supplying Ukraine with Russian gas were “unenforceable.” Washington would continue diplomatic efforts on this front, she said, but recalled how last August the US congress voted for sanctions against companies involved in the pipeline project.

Making light of such tough talk, in a show of the thaw with Germany, Putin joked on Friday in Sochi that US opposition to the Nord Stream project was perhaps the only point of continuity between the Obama and Trump administrations.

The Russian and German leaders share too much history to become bedfellows in this life. But the Sochi thaw suggests the two are pragmatic enough to move on, sharing the belief that, in politics, there are no friends—only shared interests.