Home Eye on Europe A Tale of Two Models

The EU’s policy in the Western Balkans has proven fruitless—and that has opened a vacuum for authoritarian leaders from Russia to Turkey to step in. 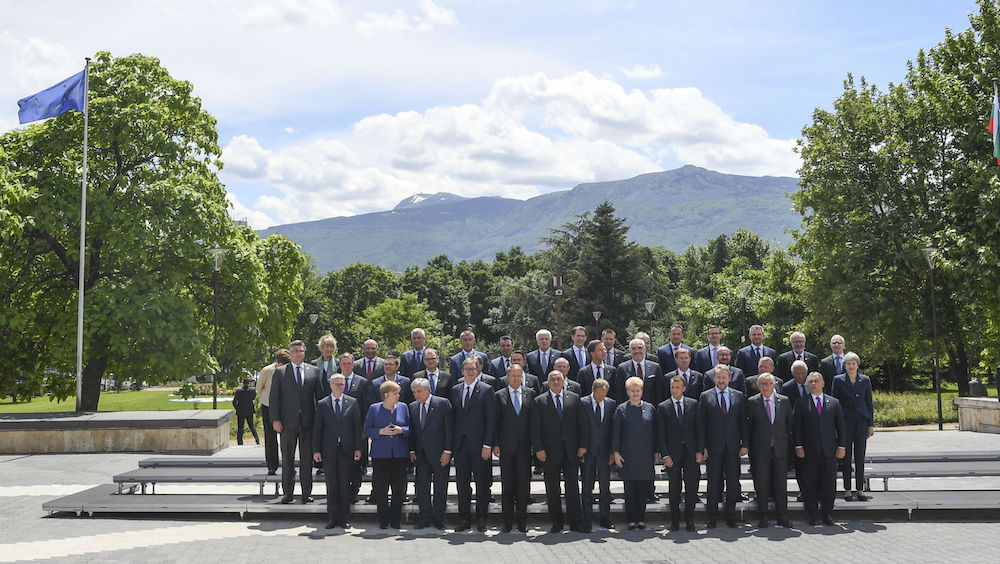 In politics, there are no coincidences. That could be the lesson from the fact that the EU hosted its annual Western Balkans summit just days ahead of President Erdogan’s visit to Sarajevo, as part of his AKP party’s “regional” election campaign.

The EU summit, of course, has been in the works far longer than Erdogan’s visit, but that makes the Turkish president’s arrival in Bosnia and Herzegovina all the more striking. After all, the summit in Bulgaria was a true non-event: No major policy initiatives were announced, no significant projects unveiled, nor were there any major breakthroughs concerning any of the region’s myriad unresolved disputes or worrying decline in democratic standards. There had been hopes that Macedonia and Greece might use the Sofia meeting to finally settle their long-standing dispute over the former’s name. But even that scenario fizzled out—although rumors persist that a solution is imminent.

That lack of progress is striking because the region does not lack for urgent crises. Consider only the deteriorating state of human rights, the free press, and democratic accountability in Aleksandar Vučić’s Serbia. Instead of drawing attention to these developments, or similar concerns in, say, Bosnia and Herzegovina, the EU continues to insulate the Balkan elite from any meaningful criticism.

Local civil society activists and NGOs continue to pressure Brussels to frontload substantive concerns with the quality of democratic governance in the region, but so far their pleas have largely fallen on deaf ears, notwithstanding brief references to these subjects in the respective EU missives about regional events.

Meanwhile, Erdogan announced his rally in Sarajevo before anyone in the Bosnian public administration even confirmed that such a visit had been cleared with the relevant local authorities. And indeed it took weeks for such a confirmation to arrive at all, giving the distinct appearance that the Turkish President was telling the Bosnians that he was coming, not asking.

The differences between these two events, from preparation to execution, tell the story of the contemporary Western Balkans. And it is not a tale that should put anyone committed to genuine democratic governance or the rule of law in the region or in Europe at ease.

Western Balkan politics are shaping up as a contest between a slow-moving and unresponsive EU and a constellation of opportunistic and cynical foreign authoritarians—chief among these Russia and Turkey, but also China and the Gulf monarchies. Each of these is competing for the favor and compliance of illiberal local elites, who more often than not look to authoritarian powers abroad to bolster their own undemocratic aspirations.

It is no simple matter to explain how the EU as the world’s largest economic bloc could find itself outmuscled by tin-pot autocrats of both the local and international variety. But the crux of the problem is straightforward: the technocratic establishment in Brussels, by their own admission, has no Plan B to EU enlargement.

There is no strategy for this region in Brussels beyond the belief that EU accession is essentially the ultimate objective. Once the “Western Balkan Six” are in the EU, so the thinking goes, their leaders will cease to be corrupt proto-authoritarians and their economies will cease to be patrimonial basket cases.   And if this will not quite be accomplished through the process of accession itself, then by the time these polities actually join the EU, their societies will be transformed by the decorum they will find on the other side. But the consequences of such policymaking are already on display in the illiberal and authoritarian backsliding seen in EU member states like Poland, Hungary, and Croatia.

By shirking from demands for concrete reforms from local governments, the EU’s transformative potential has actually played into the hands of local elites whose priority has long been the survival of their respective oligarchies, through a combination of confrontation and accommodation with the international community. That is why the roster of ruling elites in the region has remained virtually unchanged, except for the most minor rotations, for the better part of the last three decades.

In principle, the EU’s liberal-democratic foundation should be an existential challenge to these patrimonial regimes, but that is not what has happened in practice. Take the “Prishtina-Belgrade Dialogue,” the moribund framework for the resolution of Kosovo’s status and the opening of Serbia and Kosovo’s path towards EU accession. Governments in both countries admit the process is, for all intents and purposes, dead.

Instead of forcing the two sides to negotiate, the EU has ceded the initiative to illiberal forces on the ground. Even as Vučić and his cabinet openly declare their desire to partition their erstwhile province, and the still unsolved assassination of the Kosovo Serb opposition leader Oliver Ivanović quietly fades into obscurity, EU Enlargement Commissioner Johannes Hahn appears to be waving Vučić’s government through the accession process. Kosovo, meanwhile, remains internationally marginalized.

To local elites, and authoritarian regimes in Ankara and Moscow, this reads as a combination of incompetence and fear on the part of the EU. Brussels has been unwilling to enforce its own values on candidate states but also afraid of having these polities fall under the influence of states like Russia and Turkey; its inaction favors strongman regimes like those in Serbia and Montenegro, where powerful ruling autocrats can dress up their pro-EU oration as decisive leadership while making fragmented polities like Bosnia and Herzegovina, Kosovo, and Macedonia appear like the worst of a rotten bunch. But the underlying dynamics are identical: Brussels is squandering its political capital.

Such inconsistency by the Europeans leaves a vacuum for Erdogan and the Kremlin in the region; local governments, meanwhile, are eager for the influx of money that comes with marquee projects like the Turkish-sponsored Belgrade-Sarajevo highway.

These initiatives will further enable both local and foreign governments to distribute cash handouts to clients while creating the illusion of economic progress and political relevance at home. Along the way, democratic accountability will further deteriorate, as will any semblance of the rule of law or even regional security. But that is exactly what Turkey and Russia are knowingly offering local elites: a non-democratic means to cling to power and thus expand their own regional and continental ambitions.

So even if, well after the horse has left the barn, the Europeans decide to freeze accession talks with undemocratic regimes like the one in Belgrade, it won’t matter—local elites will have already secured new foreign benefactors.

In short, unless the EU earnestly recommits itself to genuine democratization in the Balkans—credible policy proposals already exist, but this would also mean incorporating the region’s most vulnerable states (like Bosnia and Herzegovina, Kosovo, and Macedonia) into NATO—then its already tenuous grip on the region may dissolve much sooner than anyone in Brussels would care to imagine.