It’s what all sides always said they want to avoid―the return of checkpoints and fences to the island of Ireland. But whatever Brexiteers claim, the possibility is very real. 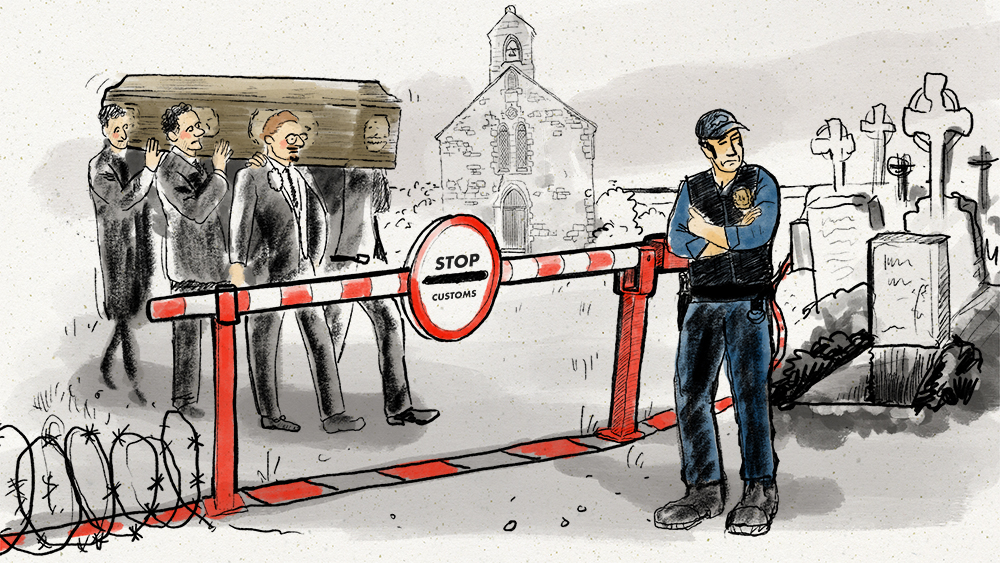 This could mean political and economic disaster for the Republic, which will remain part of the 27-member European Union after the UK’s departure in March. Dublin has flagged the closely interlinked all-Ireland economy, and the North’s fragile peace process, to secure a guarantee—a so-called backstop—that would keep Northern Ireland in closer alignment with the EU than the rest of the UK, unless some other solution is found to keep the border open.

So much for the political aspiration. But what of the reality? Brexiteers determined to cut loose cleanly from the EU and the European customs union insist that trade can continue to flow, and borders will be invisible. Ask for clarification, though, and things get hazy.

(Not so in Spike Milligan’s satirical novel Puckoon, written in 1963 but set four decades previously. With startling prescience of today’s Brexit stand-off, his novel pokes fun at how clueless officials send the border through an Irish village. Because a tiny corner of the pub is now in Northern Ireland, locals gather there to drink because the beer is cheaper. When a local man dies in bed, his body is dragged to a local photographer: he’ll need snaps for a passport if the coffin is to pass from the church, on one side of the border, to the grave waiting on the other side.)

The post-Brexit hard border farce in London has been no surprise to anyone on the divided Irish island. Before the referendum, border concerns got more of an airing in the German newspapers than the British broadsheets. That blind spot confirmed a long-held Irish suspicion that Westminster has never really understood, nor cared about, the tragedy of the Northern Ireland troubles: nearly 3,500 people killed over 30 years.

That Irish resentment spikes further when Brexiteers claim that hard border fears have been thrown down as an artificial roadblock to a clean British getaway. That ignores—through ignorance or apathy—the very real concern that Brexit uncertainties could cause a serious slide in Northern Ireland’s economy, potentially driving young men without jobs or prospects into the arms of waiting splinter terror organizations.

The End of Magical Thinking

Hardliner Brexiteers insist the present, seamless management of the border for things like sales tax, excise, and security can be extended after Brexit. But this regime, developed through EU membership, will come to an end as Britain’s membership does. And even in the case of a new EU-UK free trade agreement, some kind of border controls will still be required to avoid smuggling.

No problem, say the Brexiteers: technology can prevent border queues. With hopes fading for a soft, Scandinavian solution, like that between Sweden and Norway, a less appetizing reality arises on the horizon: the hardest of borders, like that between Poland and Ukraine.

Poland is in the EU, the Ukraine is not—nor is it in the customs union or the EEA free-travel club of which Norway and Switzerland are members. And the border crossing at Dorohusk, 2000 kilometers east of London, is where Brexit magical thinking goes to die.

They use every kind of technology imaginable here to speed up the flow of cargo traffic: e-manifestos; in-road weighing scales; license-plate-reading cameras; automatic cross-checks with Europol databases; even stowaway scanners that can detect both carbon dioxide and heartbeats inside a sealed truck.

And yet, because the border is still hard, cargo-carrying trucks face a 24 hour wait to cross, while new EU security rules means all private cars are now stopped too.
All the technology you can buy, and infrastructure covering 12 hectares or almost 17 soccer pitches, cannot prevent the EU’s hard eastern border from being a depressing bottleneck.

Dorohusk is a memory of how things once were in Europe, and how things could be again if Britain crashes out of the EU and the backstop arrangement falls apart.
A hard border, according to the Cambridge Dictionary, is a border that is “strongly controlled and protected … rather than one where people are allowed to pass through easily with few controls”.

No-deal Brexit means no-deal borders of the hard kind: in Northern Ireland, at Dover, and all other key trading points. With clogged ports and hard-border approach roads, Britain’s new chapter as a free-trading colossus may be over before it even begins.