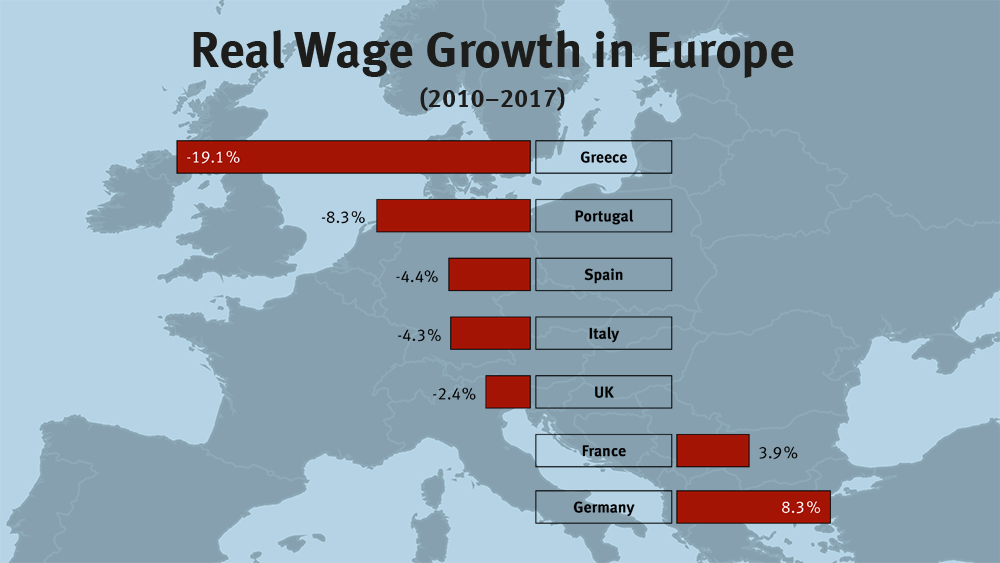 Ten years after the onset of the eurocrisis, how does the eurozone look today? It has survived as an entity, and weathered most—if not all—of the crises that cropped up over the last decade. But even as shaky debt holdings and threats of national default recede from the headlines, is the eurozone any more secure financially than it was? Here’s a demand side view of the situation.

Overall, the union has recovered, albeit in fits and starts. GDP growth has bounced back from its 2009 low of -4.34 percent, hitting a high of 2.44 percent in 2017; but within that time period, there have been several worrisome dips, with the eurozone experiencing a fresh recession in 2012 as Europe’s GDP shrank by 0.43 percent. With new worries arising about the stability of several of the member states—especially Italy, where a new populist government has clashed with Brussels over budgetary policy—growth projections for 2018 have been cut to 2.1 percent, a slowdown from the previous year.

Part of the reason is that the broader economic recovery has done little to lift wages in many countries. According to a paper published in March 2018 by the European Trade Union Institute (ETUI), real wages actually declined in nine countries in the decade following the crisis. In Greece, Cyprus, Portugal, Croatia, Spain, Italy, the United Kingdom, Belgium, and Finland, workers still make less than they did in 2009—19.1 percent less in the case of Greece. ETUI lists several factors that have contributed to these drops, the most important being the reforms imposed by creditors in exchange for financial support measures: In many of the hardest hit countries, labor market reforms undermined collective bargaining in the name of competitiveness, rendering it more difficult for employees to push for higher wages as national economies recovered.

One of the problems here is domestic investment spending. The crisis decimated national budgets, and the austerity measures implemented to address it encouraged countries to slash yet further. Ten years on, that trend has yet to reverse. According to the Financial Times, Greece spends about 13 percent less of its GDP on domestic investments than it did in 2007, and Spain about 11 percent less. The only countries to have actually increased domestic spending are Sweden, Austria, Norway, and Germany—some of the countries least affected by the crisis, contributing further to intra-European disparities.

For the euro-skittish, enthusiasm for the European project often hinges on the prosperity European integration is meant to bring; and as the European debt crisis morphs into a longer-term demand crisis, that prosperity could reach fewer and fewer.