As foreign secretary and secretary for exiting the European Union, Jeremy Hunt and Dominic Raab have taken up keys posts in the British government. What can Brussels expect from them? 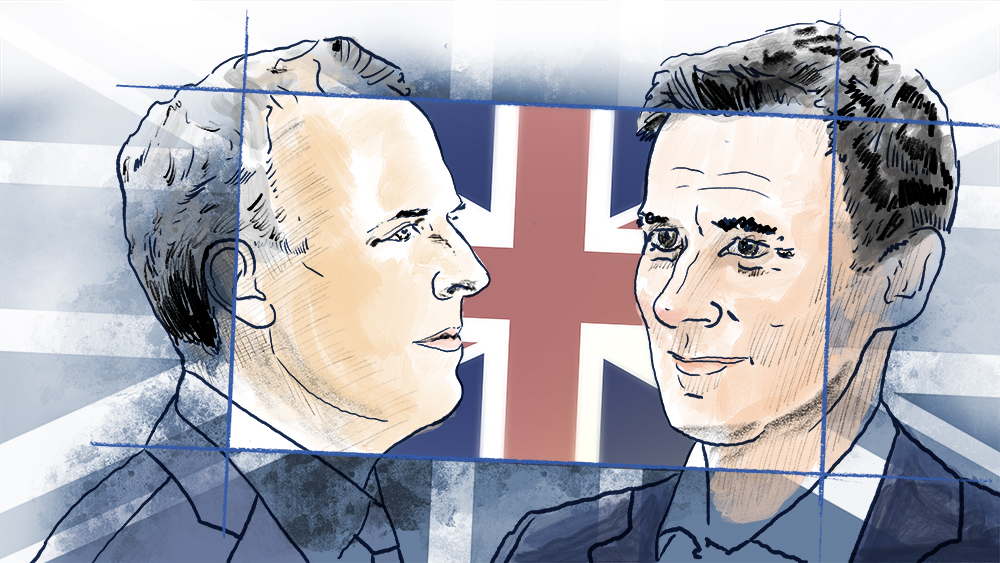 It is a sign of the febrile state of British politics that the twin resignations in July of the foreign secretary and the Brexit secretary (within hours of each other) barely caused more than a week-long ripple in the news cycle. In the places of Boris Johnson and David Davis came two new faces, one hardly known outside the United Kingdom, and one hardly known within it—namely Jeremy Hunt as foreign secretary and Dominic Raab as the new Brexit secretary. Both men, at least superficially, come directly from Conservative party central casting: Oxford University, southern England, posh, male, white.

Raab, who is 44 and far from a household name in the UK, carries a big reputation in Conservative circles as the standard bearer of the Thatcherite right. In the flesh, he has something of the good looks of the Mad Men’s Don Draper. His constituency page boasts a photo of him in army camouflage, taking part in an exercise with local army cadets. Raab also has a taste for karate and boxing.

This self-consciously macho approach also soaks into how Raab talks about himself. For his first big BBC interview on the job, he served up a diet of phrases such as “I’m focused—relentlessly and unflinchingly—on getting a deal [with the EU on Brexit]. I’ll be striving every sinew…” This sort of muscular talk plays well to the Conservative party membership, but Raab may need to adopt a slightly more three-dimensional public persona if he wants one day to become prime minister.

Andrew Gimson, biographer of Boris Johnson and contributing editor at the influential ConservativeHome.com website, concurs. “Raab is a formidable figure—never backward in advertising his powerful intellect,” he wrote, adding: “He knows his brief, but there is something a bit inhuman about his drive and persistence. His present job [Brexit secretary] will make or mar him. It’s easy to imagine him as a senior cabinet minister, but again quite difficult to see him as leader. If May cannot keep him on side, she will be in desperate trouble, and this, one supposes, gives him a certain amount of leverage.”

After Oxford and a brief legal career, Raab joined the Foreign Office, which saw him serve a spell in The Hague, and, most notably, in Ramallah with the World Bank, advising the Palestinian Authority in the West Bank.

Raab first really reached the headlines in 2012 with a book (co-written with four other young Tory MPs) entitled Britannia Unchained. It made the case for lower taxes, less red tape, and reduced employment rights. Raab ominously told The Guardian at the time, “The talented and hard-working have nothing to fear,” but added, “People who are coasting—it should be easier to let them go, to give the unemployed a chance. It’s a delicate balancing act, but it should be decided in favor of the latter.” While such “unpalatable” beliefs probably did him no harm among party members, Raab’s critics quickly dubbed the book “Britannia Unhinged.”

Considering Raab’s macho image, it is perhaps ironic that just two weeks after his promotion, the UK’s female Prime Minister Theresa May announced she would be taking personal control of Brexit negotiations, relegating Raab to responsibility for domestic preparations. Only two days later, Raab appeared stumbling, even at times slightly terrified, when he stepped before the Brussels press corps with EU chief Brexit negotiator Michel Barnier for the first time. His pre-planned pay-off line “Michel, we’ve got work to do!” fell resoundingly flat. In fairness, Raab had recovered his sangfroid by the time of their second meeting a month later—even if it came at the expense of rehashing again his “I bring vim and vigour” cliches.

Jeremy Hunt, the new foreign secretary, is a much better-known proposition, due to his six-year tenure as health secretary—always a tricky post for a Conservative politician, as the NHS was a post-war Labour creation, and his party is still widely distrusted on it.

Indeed, Hunt was the longest-serving health secretary in British political history—which gives some indication of his flexibility and survival instinct. Others have been less charitable, with Lewis Baston, UK politics-watcher at the Electoral Reform Society, likening Hunt’s adaptability to being a shape-shifter, although he adds that is “not necessarily a bad thing in a cabinet-level politician.”

“For example, he was quite a good ‘Remainer’ in the Cameron era, but now claims he’d vote ‘Leave’ if history was re-run. It also means he fits into the departmental ethos where he goes—and will probably do a competent, polite, and professional job at the Foreign and Commonwealth Office.”

Hunt also has what Baston describes as a “low emotional temperature,” and so “some of the qualities that make him a good cabinet minister would make him a poor leader, I think.” “[Nevertheless,] he is one of not many politicians on any side to have much of a clue about east Asia,” he added. “Despite his slip the other day, he is knowledgeable and reasonable on China and Japan.”

That “slip” was his debut meeting with Chinese leaders in Beijing, where Hunt accidentally described his Chinese wife as Japanese, before swiftly correcting himself. (Speaking of slips of the tongue, one reason Hunt is well-known with UK voters is because his surname is rhyming slang for the abusive term for female genitalia, something that has tripped up even BBC presenters live on air.)

At Oxford with Cameron and Johnson

The son of a navy admiral, Hunt was educated at one of the UK’s most exclusive (that is, expensive) private schools, Charterhouse, before studying PPE (Politics, Philosophy and Economics) at Oxford, where he was a contemporary of both David Cameron—the prime minister who called the Brexit referundum—and Boris Johnson.

His first government position, under the Conservative-Liberal Democrats coalition, was in the role of Minister for the Olympics, widely considered a success; he then became culture secretary before moving on to the far more difficult job of health secretary.

There, he managed to annoy senior doctors by referring to a “Monday to Friday” culture (prompting the social media hashtag #ImatworkJeremy from consultants working weekends). Junior doctors turned against him when he imposed a new work contract extending basic hours to 10pm on weekdays and Saturdays, prompting the first strike by junior doctors in more than 40 years.

A senior consultant at a London teaching hospital who saw Hunt up close praised him for ultimately managing to obtain substantial money for the NHS before leaving for the Foreign Office. He said he was impressed with “the quality of Hunt’s ‘stagecraft,’ but in all my time working in health, there was never such an unpopular leader.”

Gimson agrees, pointing out that Hunt has “the compulsive desire of a certain kind of Englishman always to remain on good terms with people, which makes him, from the point of view of the official classes in Brussels and Berlin as well as London, a safer type of foreign secretary than his predecessor.”

“He must harbor dreams of the leadership and might come through as a compromise ‘Stop Boris’ candidate,” said Gimson. “But Hunt is so unforthcoming that I think the Tories would be wary of fighting a general election under him—which probably rules him out.”

That slight evasiveness of Hunt was evident in his first major speech as foreign secretary, in mid-August, where he laid down the law with a stark warning that a “messy divorce” would be a “geostrategic error for Europe, at an extremely vulnerable time”—indeed, it would represent a “fissure in relations between European allies that would take a generation to heal.” However, characteristically, he delivered this thunderous threat to a friendly audience in Washington, not Brussels.

Peter Martin, president of Hunt’s South West Surrey Conservative Association, naturally disagrees, highlighting Hunt’s “knowledge of languages, superb organizational skills, his ability to get on with everyone and his amazing affability. None of us are surprised that he is now the secretary of state for foreign affairs. Indeed, few would be surprised if he one day took the top job!”

Hunt may be helped by the fact that he speaks fluent Japanese (from a spell after university teaching English in the country), and by his aforementioned Chinese wife. Raab also has a foreign wife, from Brazil. Unremarkable as these facts may be in 2018, that still makes both men something of a rarity among upper echelons of the Conservative party.

Whilst the off-the-record line in Brussels since the reshuffle is that “a change in personnel, not a change in policy” is all that is expected from London, personal chemistry can go a long way in politics. Both men have a brief handed down to them from Number 10 Downing Street that they have to stick to, but both Hunt’s politeness and personability and Raab’s inexperience may make life easier—if only for the EU side.

And both men’s likely aspirations to secure the top job—the prime ministership—will be shaped by the aftermath of Boris Johnson’s own resignation. While it opened up the Foreign Office post for Hunt, its immediate affect was a large boost in Johnson’s popularity among the party’s hugely euroskeptic membership.

It is these grassroots Tories, numbering only around 120,000, who will pick the next Conservative party leader, and with it, the next prime minister, at least until a general election is called.