Home Eye on Europe The EU Needs to Work with Italy

Italy’s new government will confront the EU, but fears about a euro exit are overblown. The EU needs to work with Rome to keep it on board. 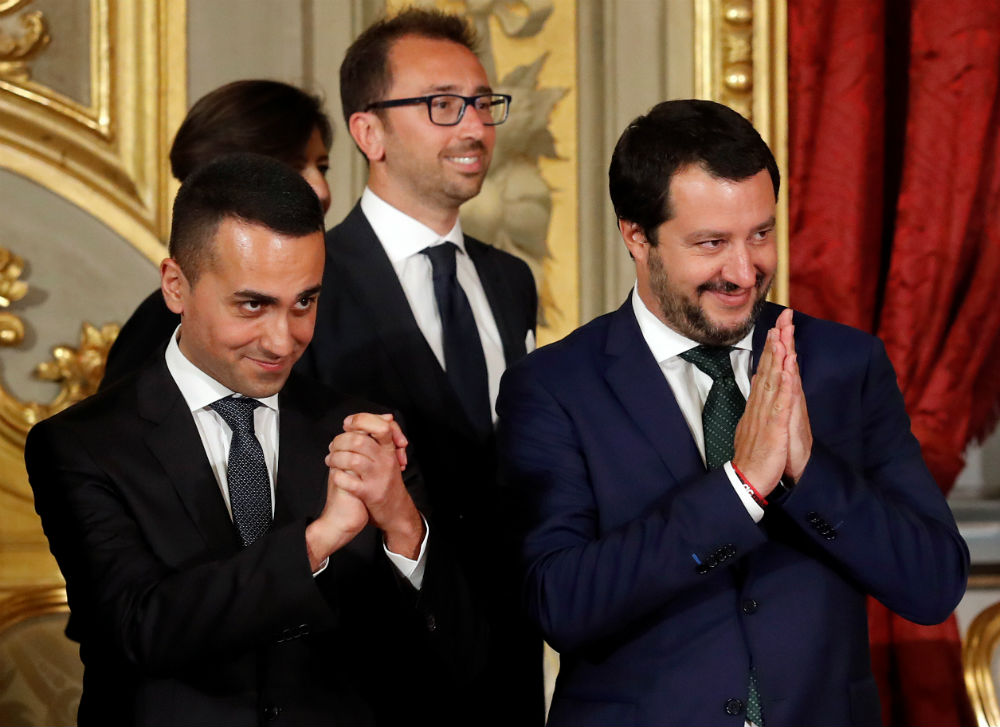 The dust has settled, and a coalition of the League and the 5 Star Movement is governing Italy. Many European commentators have greeted the new government with shock: They worry that Italy will put the eurozone at risk and act as a spoiler within the EU, blocking other countries’ attempts to reform the union and undermining European unity on Russia.

These fears are probably overblown. The friction between Rome and Brussels is likely to be manageable for the time being, in part because domestic politics and international financial markets will constrain Italy’s freedom of action.

But this is not a reason for the EU to be complacent. If the EU does not do more to convince Italians that they benefit from the EU, the chances of Rome becoming more confrontational, and of an Italian exit from the euro or the EU will increase in coming years. This would be a disastrous development for Brussels.

Why do other member-states have concerns about Italy’s new government? The first issue is the new government’s economic program. The coalition has promised a series of tax cuts and increases in social spending, which if implemented would increase the deficit to around seven percent of GDP, breaking a host of EU rules and forcing a showdown with the Commission. But it is very unlikely that the government will even try, let alone be able, to implement such a radical program. A fiscal expansion of such magnitude would panic financial markets, raising the yields on Italy’s debt and hitting Italian banks hard. If financial crisis loomed, Italy’s government would likely step back from the brink. It relies on a small majority in the upper house and could be replaced if MPs defect.

The Five Star and the League know this and have already staged a climb-down. It now appears that the planned tax cuts will unfold over time, while the promise of a universal basic income has turned into a promise of an enhanced unemployment benefit limited to two years. In reality, both may never happen. Instead of embarking on a collision course with the markets and the EU, Rome is much likelier to simply run a slightly higher deficit, in the order of 2.5 to 3 percent of GDP. This would violate the EU’s Fiscal Compact, which mandates small ‘structural’ deficits (deficits adjusted to economic cycles) and speedy debt reduction—allowing coalition leaders Matteo Salvini and Luigi di Maio to celebrate Italian liberation from the ‘diktats’ of Brussels. But it would not panic international bond markets.

In fact, the key problem presented by the new government in Rome is not its economic policy as such, but that it will make reform of the eurozone more difficult. For the 5 Star Movement and the League, stricter European oversight of national governments’ financial and fiscal policies is a non-starter. Yet such oversight is precisely what Germany and northern member-state demand in exchange for deeper risk-sharing in the EU. They will not trust this Italian government to carry out significant risk reduction in its banking system. As a result, any move towards banking union will be slowed down.

Aside from economic policy, analysts are concerned about the new government’s foreign policy, particularly its position towards Russia. The Five Star and especially the League are friendly towards Moscow. In his inaugural speech PM Giuseppe Conte called for a ‘revision’ of sanctions. Italy’s stance, combined with the relative rapprochement between the EU and Russia prompted by Donald Trump’s trade tariffs and withdrawal from the Iran deal, has raised the possibility that the EU could ease sanctions over the next year. However, Italy is unlikely to push for a removal of sanctions by itself. Doing so would drain political capital that Rome would rather use in the economic sphere, where it could be tempted to use the threat of vetoing sanctions as leverage. Instead of attempting to ease sanctions, it is far likelier that Italy will attempt a balancing act, seeking to maintain EU unity while also boosting political and trade ties with Moscow. Many Italian politicians, of all stripes, do not see this as a contradiction—and point to Nord Stream 2, the controversial pipeline that will bring Russian gas to Germany, as evidence that other member-states have long been practicing this.

This Italian government will also be friendlier towards the Trump administration than many in the EU. Rome will probably seek to use its foreign policy influence to prevent or limit escalation in the transatlantic trade war. At the G7 meeting last week, the Italian PM expressed his skepticism about escalating the ongoing dispute with Trump. Italy is not the only member-state to doubt the wisdom of escalating the spat with the US: Germany has also taken on a softer stance than France. And other states, such as Poland and the Baltics, have sought to maintain good relations with Trump because of their reliance on the US for deterring Russia. They, too, are likely to shy away from further escalation, giving Italy some allies.

In essence, Italy is unlikely to act as a spoiler. While Rome will argue with Brussels and work to soften Europe’s stance towards Russia and the Trump tariffs, it almost certainly will not pursue radical economic policies incompatible with euro membership or seek to remove all sanctions on Russia.

The EU’s job: Compromise with the Italians

But in the medium-term, things could get worse. Brussels should not be complacent about Italy. Italians feel the EU has abandoned them in the eurozone crisis and the migration crisis. They have become much more critical of the EU than they were prior to 2008: The latest Eurobarometer survey shows only 44 percent think EU membership has benefited Italy.

The EU should try to work with the government in Rome. It should allow Rome to slightly raise spending—especially if this comes in the form of investment—and thereby secure a symbolic victory over Brussels. As things stand, it appears that the EU will open ‘an excessive deficit procedure’ in response to increased Italian deficits. The procedure would monitor the Italian budget and suggest corrections to Italian finances. The political impact of this familiar move could be contained: Spain is still in the procedure, while France was in the procedure from 2009-2018 and escaped Commission fines. But if the EU ends up issuing Italy a fine, it will merely reinforce the idea that the EU dictates Italian policy, and encourage the Five Star and the League to lash out and espouse more uncompromising positions. A small fiscal expansion may even have the effect of boosting growth and lowering the overall debt/GDP ratio.

The EU should also step up its efforts to help Italy manage migration flows. So far, the EU has focused its efforts on reforming the Dublin regulation, which stipulates that the first member-state an asylum-seeker enters is generally responsible for determining that person’s asylum status. But reform has stalled. It is difficult to imagine that member-states will be able to agree on a relocation scheme of a sufficient magnitude to take the pressure off frontline countries. Additionally, the Dublin-centric approach does little to address factors that push people to migrate, and the difficulties that member-states have in returning rejected asylum-seekers to their countries of origin. A better way for the EU to show solidarity with Italy would be to put money on the table to persuade African countries to sign agreements to take back their citizens. It should make available funds of the same order of magnitude as the €6 billion already pledged to Turkey.

If the EU does not do more to convince Italians that the EU benefits them, Italians are likely to become even more euroskeptic – to the extent that leaving the euro would no longer appear unthinkable. If Italy defaulted and left the euro, the ensuing financial crisis could lead to the unravelling of the euro, and fracture the EU.