Home Eye on Europe The Price of Not Moving

Spain’s carousel continues to spin: Former Prime Minister Mariano Rajoy was ousted in a rapid turn of events, ending his career and thrusting his party into turmoil—and it’s not over. The new government is facing a host of challenges. 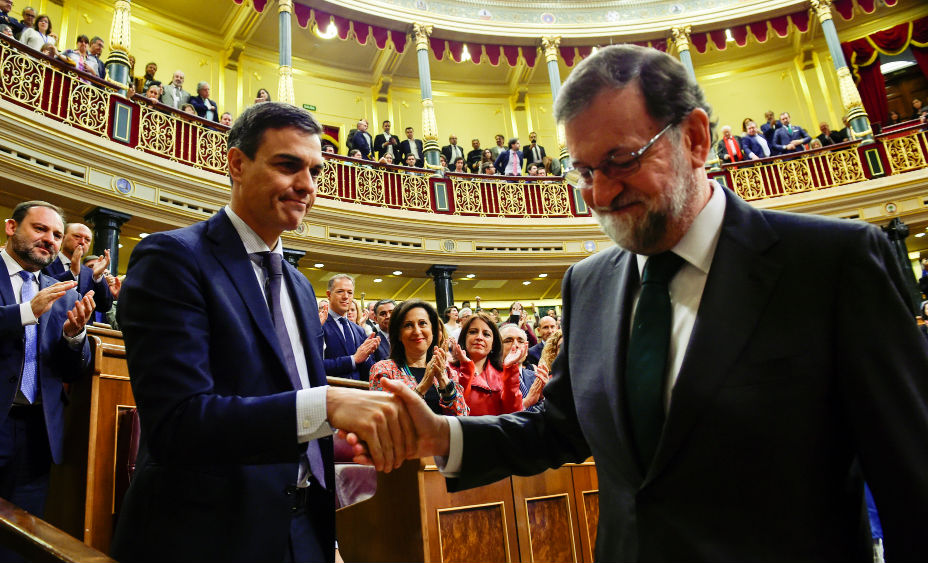 Spain’s former leader, Mariano Rajoy, uttered that convoluted sentence in February 2014, during a Senate debate over Catalonia’s grave (and ongoing) political crisis. The then-prime minister’s words entered into a pantheon of confounding expressions and phrases that have left their mark on Spain’s political conscience.

Understanding Rajoy’s penchant for taking decisions only when it appears inevitable is fundamental to understanding Rajoy himself: Some see the work of a great political strategist; others see unequivocal incompetence and futility in the leader of the conservative Partido Popular (PP).

Either way, Rajoy appears to be history. On June 1, the leader of the Spanish Socialist Workers’ Party (PSOE), Pedro Sánchez, managed to do what only a few weeks earlier seemed impossible – to oust Rajoy from government through a no-confidence vote. The social democrats only have 84 seats in parliament after suffering their worst result in the December 2015 elections since Spain’s transition to democracy, but they still managed to drum up broad support for the motion in record time, cobbling together an unlikely alliance of the left-wing alternative Unidos Podemos, the Basque nationalists, Catalan separatists, and other, smaller groups in parliament. In doing so, Sánchez achieved an historic feat: It was the first time a prime minister was toppled by a no-confidence motion in Spain.

The trigger was the so-called “Gürtel case”—a high-profile corruption scandal that uncovered a nebulous web of criminal activity funneling money to the conservative party. Senior PP figures organized a kickback scheme that granted public contracts to businesses in exchange for illegal donations. In late May, a court slapped the PP’s former treasurer and other figures close to the party with lengthy prison sentences and fines; it also pointed to the civic liability of the PP itself and even cast doubt upon the “credibility” of Rajoy’s testimony given in court last summer. It was the straw that broke the camel’s back, elevating the motion of censure that had appeared doomed to failure. The last chapter of the Gürtel case, meanwhile, is still open and will likely generate more uncomfortable headlines for the conservatives.

In a way, Rajoy fell victim to one of his own tactics: He waited for his rivals to move before he did. But this time, he paid the price for not moving. The politician from the northern region of Galicia has always trusted in the PP’s ability to win elections; the party has, after all, amassed the most power and members across 40 years of democracy in Spain. But with only 134 seats in parliament, added to the liberal conservative Ciudadanos party’s 32 seats, the PP simply did not have the numbers to save the government.

Rajoy exited the office with the same attitude he entered more than six years ago—without the slightest will to do anything off-script, not even to prevent political rival Sánchez from becoming Spain’s new leader. Rajoy could have called new elections and then resigned from his post, but he chose, once again, to stand still. Now, his political career appears to be finished as well. After losing the no-confidence motion, he announced he would step down as leader of the PP.

And that is indeed significant. Since entering politics in 1981, Rajoy has served in every possible position there is in the Partido Popular: regional deputy, council president, secretary general, minister, vice president, and president of the government. Despite his four decades of power and experience, his sole defense against corruption accusations was that he knew nothing—a version of events that is impossible to believe.

The leaders of other European countries such as Germany, France, or the UK would have resigned long ago if faced with similar scandals. Spain, however, remains a country where corruption in politics does not seem to wield the same damage—perhaps because Spanish citizens (sadly) have grown accustomed to it.

The new government under Pedro Sánchez is not only historic because it was created on the back of a no-confidence motion, but also because of its make-up: 11 of the 17 ministries are headed by women. Never before has a Spanish executive been so female. And the cabinet choices have been quite the coup for the new government as well, catapulting the PSOE to top of the polls. After more than six years of a colorless, authoritarian style of government under Rajoy, Sánchez has breathed fresh life into Spain’s institutions and sparked euphoria among center-left voters.

But the PSOE’s honeymoon could be as short-lived as the two years until the next general elections. The new government faces major challenges: The crisis in Catalonia is far from being resolved, with elected Catalan politicians still behind bars or in exile for holding a referendum on self-determination that the constitutional court deemed illegal; the country’s much-celebrated macroeconomic recovery is deeply flawed and has generated massive insecurity in the labor market; and the current constitution, approved in 1978, is no longer capable of addressing fundamental questions, such as delineating Spain’s territorial organization or redefining the role of head of state—an increasingly controversial debate over a possible transition from a constitutional monarchy to a republic.

Add to that the fact that Sánchez’s new government only has 84 of 350 seats in Spain’s Congress of Deputies—far short of the majority needed to push through reforms and legislate comfortably. Parliament is deeply fractured, and it seems institutional instability will be a given.

If the Catalonia crisis or the country’s fragile economic recovery takes a turn for the worse, the PSOE could pay a heavy price in the next elections. As Enric Juliana, Madrid correspondent and deputy director of the Catalan newspaper La Vanguardia (and one of the best analysts of Spanish politics) pointed out, after years of vertigo, nobody is truly down for the count in Spain’s political arena—and above all, anything can happen.