Would the German chancellor confront US President Donald Trump at the G7 summit in Canada? Would she resign over her refugee policy? In her first-ever appearance in a Bundestag question-and-answer session, Angela Merkel didn’t break a sweat. 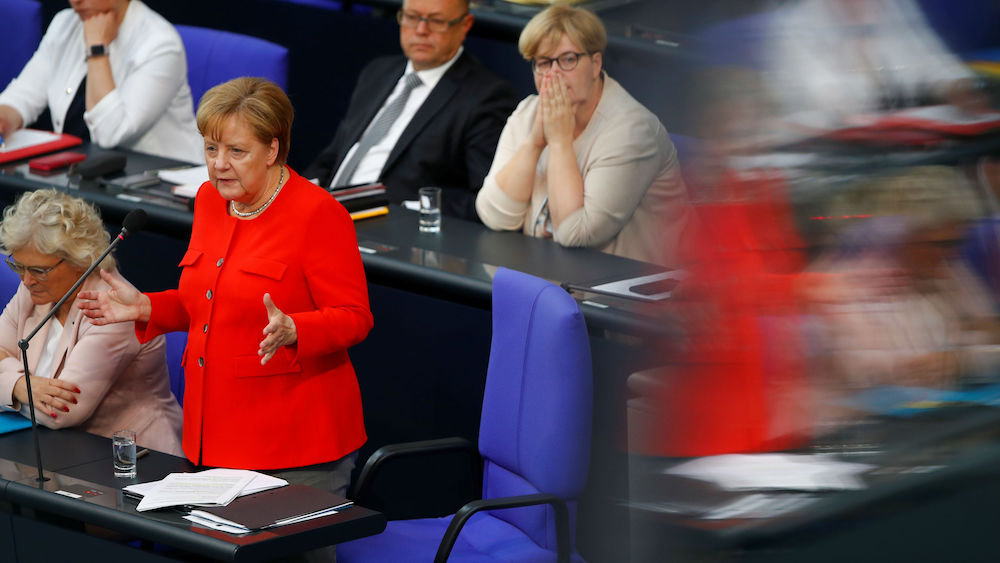 Berlin’s Bundestag was bristling with expectation on Wednesday when Chancellor Angela Merkel arrived for her first question-and-answer session with members of parliament.

With a nod to Prime Minister’s Questions in the United Kingdom’s House of Commons, the Bundestag session was pushed through by Merkel’s junior partner, the center-left Social Democratic Party (SPD). Other parties supported the move to reclaim some spontaneity to the German chamber as well. The German federal parliament doesn’t have the same rhetorical tradition as the UK, and it is often a place of dry, scripted speeches, zero debate, and empty press benches. For years, political talk shows have eclipsed parliament as the true place for debate.

Yet hope springs eternal, and all eyes turned to the Bundestag at 12:30 pm. In the end, we shouldn’t have gotten our hopes up. MPs were too busy being impressed by Merkel—or grandstanding—to actually ask a tough question.

Chancellor Merkel stood in her place with no podium to hide behind, clutching papers before her nervously like a shield until she realized the questions were going to be as tough as candy floss.

The first item on the agenda was the upcoming G7 meeting in Canada. Merkel conceded that Trump’s tweeting habits, penchant for U-turns, and protectionist tariffs meant “we have a serious problem with multilateral agreements.” The deterioration in Europe’s relationship with the United States could no longer be “papered over,” the German leader admitted.

Echoing comments from last year, she said this meant Europeans “have to take care of ourselves to an extent and learn to be consistent in defense and security policy.” The German leader said she would meet Italy’s new leader Giuseppe Conte on the sidelines of the G7 meeting; Conte is heading a populist coalition, but Merkel said she didn’t see “as dramatic a problem” with European partners as the US.

Given what the EU views as US breaches of trade and environmental agreements, the Green Party wanted to know when Merkel was going to stand up to President Trump. “I don’t think linking everything together is the right approach in the German interest,” she said.

The Bundestag format allowed one minute for a question and the same time for Merkel’s answers. Observers had anticipated this would work to the advantage of the opposition, in particular the far-right Alternative für Deutschland. In the end the AfD failed to land a blow on the German leader, even when accusing her of triggering “floods of migrants” resulting in “serious damage” of attacks and rapes. AfD MP Gottfried Curio culminated what was more an extended statement than question with: “When are you going to resign?”

The chancellor brushed off the questions, insisting she had acted responsibly in a “humanitarian emergency” and noted that the European Court of Justice (CJEU) had confirmed she had acted legally as well. “The basic political decision was correct,” she said.

She dismissed a series of questions about a growing scandal over asylum applications, where at least 1,200 refugees were granted asylum status incorrectly. Merkel insisted she only knew of these specific problems “recently.”

She conceded she had appointed a new chief to the federal asylum board in September 2015 to deal with “grave structural problems” in an authority that, faced with a surge in asylum applications, had to quadruple its staff numbers. The chancellor spoke to asylum agency chief Frank-Jürgen Weise “countless times and always encouraged him to tell us of all deficits.”

In a rare moment of spontaneity, a far-right AfD parliamentarian complained that Merkel had spoken longer than the allotted one minute. Bundestag president Wolfgang Schäuble replied that the first AfD question had been too long, too. “Mind your own business,” added Schäuble, “before you give me advice.”

After mastering television debates with loud opponents, town-hall meetings with weeping teenagers, and intimidated YouTuber interviews, a confident Angela Merkel strolled out of the Bundestag chamber with the latest political novelty format behind her.

“Much of a shame as it is, it’s over,” she said with a triumphant smile, adding: “But I’ll be back.”