The German Chancellor gave a  wide-ranging interview to the Frankfurter Allgemeine Sonntagszeitung (FAS). There were no huge shocks—this is, after all, Angela Merkel, and the German press typically allow politicians to edit interviews before printing. But there’s still a lot for Europe-watchers to unpack. 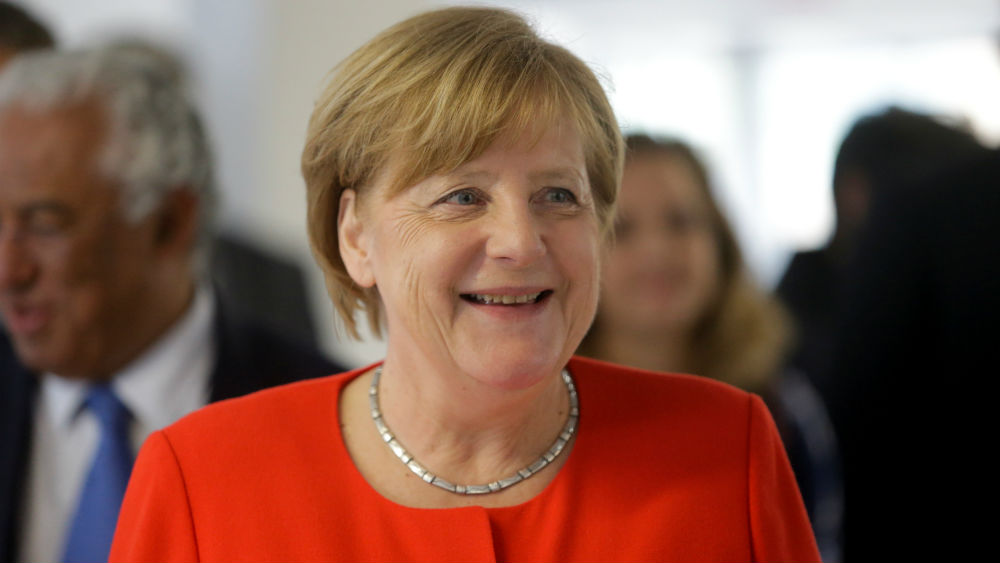 In the wake of Chancellor Merkel’s interview last Sunday, most commentators have focused on her plans for the eurozone, with the European Council meeting at the end of June to discuss the issue and French President Emmanuel Macron in need of German support for his ambitious eurozone reform proposals. The hostility of Italy’s new government toward EU spending rules has only increased debate about the future of the common currency.

Merkel acknowledged that the EU needs to do something to bring “long-lasting stability” to the euro. She insisted that Europe needs “the banking union and the capital markets union,” though she failed to discuss the concrete steps required to get there, such as European deposit insurance. She said that Europe should transform the European Stability Mechanism, the euro area’s bailout fund, into a European Monetary Fund (EMF) that could make both long-term loans conditional on structural reforms and shorter loans to member-states that “get into difficulties because of external factors.”

Control of this fund, Merkel envisions, would remain at least in part with national parliaments. It would have “instruments that could, if necessary, restore [a member-state’s] ability to carry its debts.” The main such instrument is automatic debt restructuring, whereby receiving an EMF loan would be conditional on the borrowing member-state paying its bondholders back either more slowly or only partially. For a heavily indebted member-state like Italy, the prospect of restructuring would make sovereign bonds appear less safe and thus raise borrowing costs.

She also repeated her support for a eurozone investment budget in the “low double digits of billions” (for context, eurozone GDP in 2017 was €11.2 trillion) with the aim of helping member-states that need to “catch up” in areas like artificial intelligence, to take Merkel’s example.

While these are all constructive ideas, there is a lot that Merkel didn’t mention. She said nothing about a large eurozone budget worth several points of eurozone GDP or a eurozone finance minister—both proposals Macron backs. What’s more, France would resist her plans for automatic debt restructuring. Germany’s preference for strict rules clashes with France’s desire for greater fiscal firepower.

Playing to the Home Crowd

So what will the French president think of all this? The Élysée Palace called this all a “positive step,” but an editorial in the newspaper Le Monde better captured the mood in Paris: Merkel’s “caution isn’t suitable given what’s at stake.”

Merkel’s proposals, then, are a mixed bag. But it’s important to keep her domestic political situation in mind. She only became chancellor after her initial bid to build a coalition government fell apart, and the CDU/CSU and SPD agreed to keep the grand coalition going with a reduced majority. With the right-wing populist AfD entering parliament for the first time, she has a deeply euroskeptic party heading the opposition—not to mention one with neo-Nazi tendencies.

The mainstream German debate is a minefield too. Though the SPD party leader Andrea Nahles backed Merkel’s proposals, and the Greens lamented that the chancellor had not gone further to accommodate Macron, FDP party chief Christian Lindner worried that the EMF could become “a type of overdraft facility” for struggling member-states. According to a recent survey from German public broadcaster ARD, most Germans are satisfied that Macron wants to reform the EU, but 48 percent of those polled also think his proposals for financial integration “go too far.”

The liberal weekly DER SPIEGEL, meanwhile, has responded to Italy’s turn to populism with a cover that stereotypes and an editorial that lambasts the pasta-eating “moochers from Rome.” Then there is the faction of conservatives in Merkel’s own party who tend to think first of protecting German wealth from greedy neighbors. Merkel’s pledge to the FAS that “solidarity among European partners may never lead to a debt union” was directed primarily at them.

Finally, there is the minor problem that the other member-states would have to agree to Macron’s proposals as well.  The Franco-German motor is important, but Europe also needs the rest of the car. Merkel’s pragmatism might drag some reluctant reformers along.

Merkel did in fact push for change on some significant non-eurozone issues. She came out in favor of Macron’s European Intervention Force for rapid military action outside the EU framework. She backed a system of common EU asylum standards and a proper border security agency. And she confirmed that Germany is ready to pay more into the EU budget—an area where other net payers like Austria and the Netherlands are more protective of their money.

It is true that Merkel’s EU reform proposals leave something to be desired; they certainly understate the need for a more integrated eurozone with more risk sharing.  But they are also reasonable negotiating positions restrained by domestic politics—far enough from Macron’s preferences that there will almost certainly be no agreement at the summit at the end of the month, but constructive enough that the debate can move forward.