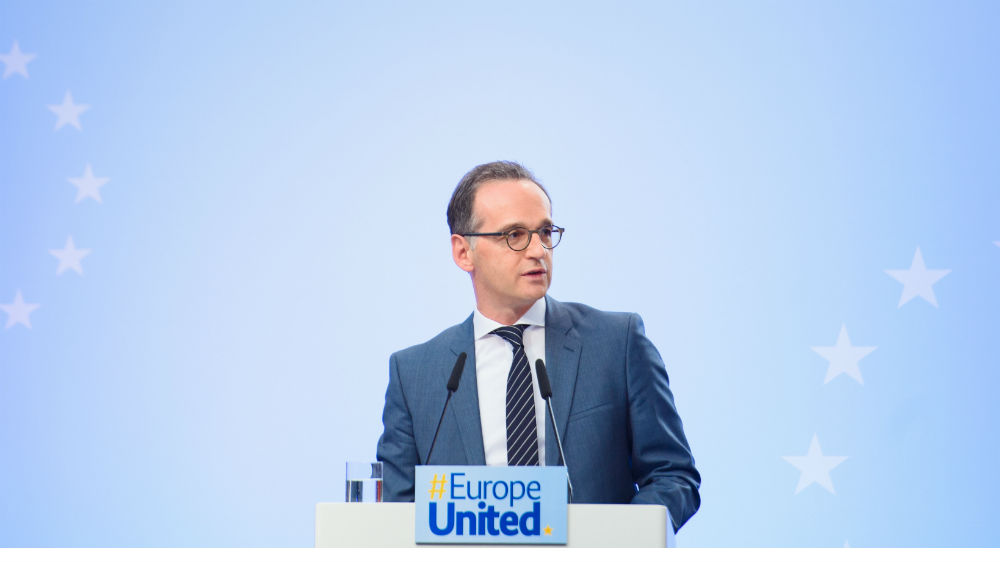 In our attention-deficit era, when a Trump tweet can collapse a G7 meeting, is there any place for—or interest in—stirring speeches on the future of Europe?

That was the challenge Heiko Maas, Germany’s foreign minister, set himself on Wednesday in Berlin: To present arguments, ideas, and proposals to ensure that European integration won’t head down the same defunct route as the old industrial hall in which he spoke. He didn’t beat around the bush, turning his first sentence into a question: How can Europe assert itself in a world increasingly radicalized by nationalism, populism, and chauvinism?

Some 5,000 words later, his answer had become clear: By activating a passive European patriotism slumbering in the continent’s silent majority. Squeezed between Donald Trump’s America-first politics, Russian attacks on international law, and Chinese expansion, he warned, seven decades of certainty in Europe have come to an end.

“The world order we knew, which we got used to, and in which we sometimes made ourselves a little too comfortable—that no longer exists,” he said. “Under President Trump the Atlantic has grown wider and Trump’s isolationist politics have left behind a massive vacuum.”

Maas also suggested unfurling the Europe flag “as a banner for the free world, just as the stars and stripes once was.” There is no shortage of analysis of the continent’s problems, he conceded—digitalization, climate change, migration, and the social cost of globalization—but what Europe needs is solutions. The Social Democrat (SPD) minister’s answer to America first: Europe united. Echoing iconic SPD leader Willy Brandt, Maas urged his audience—in Berlin and beyond—to show more courage for Europe.

“Courage to present our own ideas for Europe that don’t exhaust themselves in purely technocratic concerns or empty slogans,” he said, adding: “Courage to also throw over board our own orthodoxies if it serves the greater good, because only then will we remain able to act.”

As a native of Germany’s southwestern Saarland region—near France and Luxembourg—Europe’s rising nationalism “hurt his soul.” But visits to the sprawling soldiers’ graveyards of Verdun—while still a powerful antidote to nationalist intolerance—were no longer enough to stave it off.

Reforming Europe was in Germany’s interest most of all, he said, and work should start in Germany’s own backyard. He urged his country to realize that “the line between fidelity to principles and stubbornness is sometimes a thin one, particularly here in Germany.” Those are welcome words to those who feared Berlin’s currency orthodoxy came close to ensuring that the euro rulebook would survive the recent crisis, and not the currency.

“We must also learn to see Europe more through the eyes of other Europeans in order to understand the European idea,” he said. “Know-it-all finger-pointing on the part of Berlin certainly achieves less than intelligent policies geared towards balancing of interests.”

In 20 years, when Europe is forecast to comprise just five per cent of world population—and even big member-states less than one per cent—he said it was worthwhile to recall the words of ex-Belgian prime minister Paul Henri Spaak: “There are only two kinds of states in Europe: small states, and small states that have not yet realized they are small.”

Working together means moving ahead, not standing still in Europe, and Maas backed French president Emmanuel Macron’s call for a more flexible union with a pragmatic avant-garde, willing to move ahead on projects without excluding anyone who wanted to join later.

“Surrendering sovereignty to the EU enables us to win back the political influence we have long since lost as nations,” he said. “Nationalism does not in fact mean ‘taking back control,’ as the Brexiteers claimed, but, in reality, ‘giving up control’.”

Pooling greater sovereignty was crucial in today’s three burning priorities, he said: economic and financial policy, migration policy, and foreign policy. On the first, he took on Germany’s toxic EU debate that sees the cost of everything in Europe and not the value. He broke down the benefit of Germany’s single market membership—as calculated by the Bertelsmann Foundation—to some 450 euros of annual income gain per person.

“Thrift is a virtue, but avarice threatens what we want to preserve and enhance—namely the unity and strength of Europe,” he said. “Each and every cent invested here is money well spent because we will all stand to benefit in the end.”

There was no point expecting national concepts to solve social disparity or youth unemployment that have laid waste to whole swatches of Europe, the minister suggested. Instead he called for European solutions: a European minimum wage or a European reinsurance system for national unemployment insurance schemes.

He suggested Europe pool its venture capital to face down the growing Chinese innovation challenge or Silicon Valley’s artificial intelligence push. On the second major challenge, migration, he warned German politicians to get off the moral high ground and warned that “finger wagging and moral arrogance” words towards central and eastern European partners
would only increase divisions.

Finally on foreign policy, he urged Europe to adjust to new transatlantic realities by concentrating on areas where both sides’ “values and interests are balanced” and forming an “assertive European counterweight when the US crosses a red line.” Given growing world crises from Syria to Ukraine and the Middle East, he urged greater readiness to draft and implement a common foreign policy. He suggested the European Council define areas where co-operation can be decided, by majority vote if necessary.

As a show of goodwill, Maas promised that when Germany takes its seat next year as a rotating UN Security Council member, “we also want to speak on behalf of all EU member states.”

He backed calls for greater military spending as well, “not at President Trump’s behest” but because a readiness to act militarily is an essential component of a European foreign policy geared to peace and security. Only by uniting Europeans, he said, can there be any hope for his #europeunited campaign.

“Europe is about more than harmony and friendship between nations,” he said. “It is also about politics, which means debating opinions democratically and across borders.”