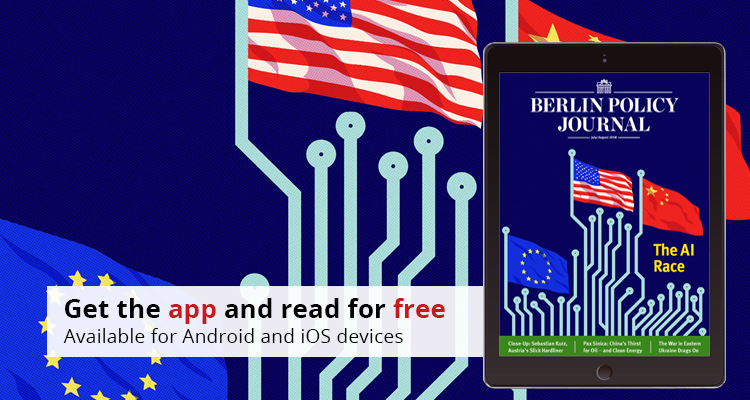 Artificial intelligence will shape politics, the economy, and society. It will also disrupt international affairs.

“AI Can Change the Balance of Power”

A debate over how AI will impact security policy―and all our lives―is long overdue, says the former state secretary of defense.

A Question of Sovereignty

Angela Merkel wants Germany to catch up with the United States and China on AI. But so far, her initiatives have faltered.

The EU can become a global AI leader. But France and Germany need to better support startups and medium-sized businesses.

China is spending massively to become a “technical-economic great power.“ And it’s preparing for the warfare of the future.

Who is Austria’s young chancellor, and what does he want?

The Bavarian CSU is on the war path against Angela Merkel, and the chancellor’s power is draining. Will she get help?

The war in eastern Ukraine shows no signs of ending. Practically none of the Minsk agreement has been implemented.

Transatlantic relations are going through a rough patch.  But NATO is strong enough to withstand discord.

A New Pact With Dehli

The EU-India relationship has momentum once again. Can the two partners capitalize?

The Other Pivot to Asia

Why the Asia Infrastructure and Investment Bank is part of today’s transatlantic trade rupture.