Hungary’s populist premier Viktor Orbán not only drinks pálinka, but also uses it as a political tool. The robust brandy brings him closer to his people. 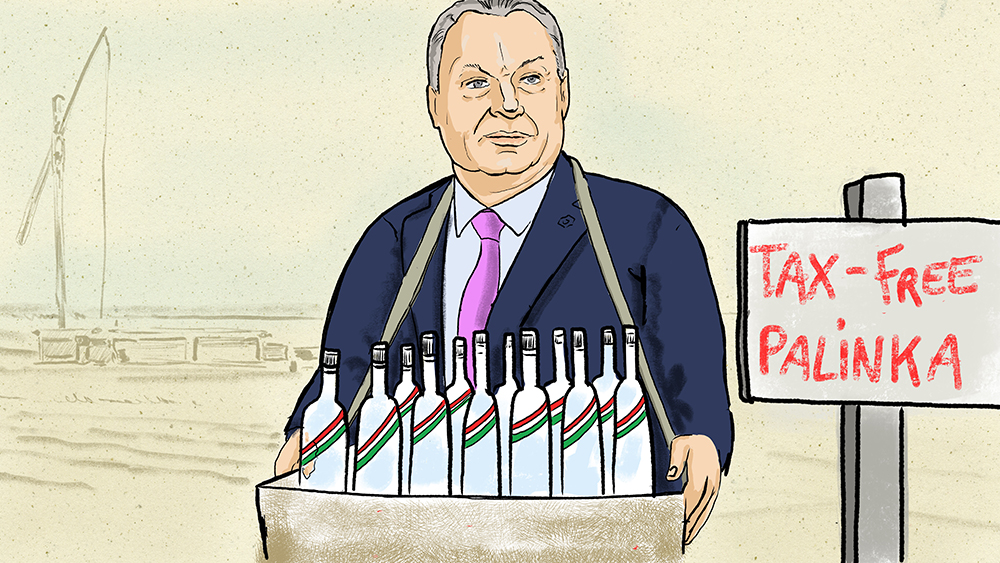 When in Hungary, you cannot escape pálinka. It starts and end meals, mends broken hearts, and soaks up a variety of sorrows. The New York Times called it a drink that tastes like a “slap in the face.” It’s made of fruit, and its alcohol content must be between 37.5 percent and 86 percent. Pálinka is recognized by the EU as unique to Hungary and covered by its “protected designation of origin” laws.

True to his populist leadership style, Hungary’s Prime Minister Viktor Orbán put the brandy on his patriotic flag early on. After his return to power in 2010, the Hungarian premier championed a law allowing citizens to distill 50 liters of their own pálinka tax-free if they used approved equipment and did not sell it to others. The liquor industry and the EU were not impressed, but Hungarians, whose rate of alcohol consumption is, by the way, among the highest in Europe, were happy. They downed a shot with the cheer: “Egészségedre!” (“To your health!”)

Yet for all the battles Orbán fought with the EU, on pálinka, he chose to give way to Brussels. In fact, when it comes to pálinka, he’s even stood down twice. There have been two infringement procedures against Hungary over the government’s efforts to institute ultra-low taxes on brewing of the national drink. In the first case, the European Court of Justice struck down Budapest’s attempt to allow tax-free home brewing in 2014. So the following year, Hungary complied and began to tax home-brewed pálinka. But in new proposals published in early June this year, the government introduced a so-called health tax that applied to soft drinks but excluded spirits like pálinka–causing a second infringement procedure. This time the government did not wait for the court decision: it introduced an increased tax rate on the fruit brandy right away.

Orbán likely wanted to avoid a protracted battle with Europe when so many other issues are looming. Still, pálinka is no small matter in Hungary. It is consumed in a particular glass with a round belly to bring out the fruity flavors. Unlike vodka, it is not supposed to be served cold. Indeed, people who keep their pálinka in the refrigerator draw scornful looks across Hungary. Serving it cold kills the fruity aroma, everyone knows that! Hungarians are also known to boast about their own home-made pálinka.

The national drink, much like its home country, has had an impressive run over the last few decades. Even though home-brewing was illegal under communist rule, many defied the rule. Quality, however, often suffered. That was true, too, for commercially produced pálinka. Socialism meant that there shouldn’t be high quality drinks at prices suited only to an affluent bourgeoisie.

Since Hungary’s democratic transition, pálinka has built a reputation as a fine liquor, with tasting festivals popping up across the country and half-liter bottles costing as much as €50. There are about 600 distilleries in the country, and the number of commercial brewers jumped from 72 to 138 between 2010 and 2017, according to the agriculture ministry.

Like many of Orbán’s battles with Brussels, the fight for the right to a tax-free, homemade pálinka is more than just a levy issue. It plays into the perception that Orbán is a self-made man from the countryside who takes on the high-minded urban intelligentsia and truly understands the Hungarian psyche. He protects Hungary’s national identity in the face of foreign pressure and is at the same time down-to-earth—someone you could throw back a pálinka with anytime. He’s known to say “Isten-isten,” another toast meaning “God-God,” before knocking back a shot.

Orbán, though not a heavy drinker, likes to pose with a shot of pálinka, especially during campaigns. In a 2013 photo album of his family’s Christmas celebrations, the paterfamilias posed with a glass in the company of his son-in-law, István Tiborcz. According to media reports, the EU’s anti-fraud office OLAF found “serious irregularities” in EU-funded projects carried out by a company once controlled by Tiborcz. OLAF recommended that Hungary’s public persecutors pursue charges, and that the European Commission should recover more than €40 million spent on the projects.

Hungarian authorities did launch a follow-up investigation, but they are unlikely to be tough on the prime minister’s family. One more reason to drink! And when you reach for that glass, remember that in 2012 Orbán likened Europe to alcohol. “Europe will slowly become like alcohol: it inspires us to achieve great goals but also prevents us from reaching them,” he told a crowd at one of his state-of-the-nation speeches.
If Europe is alcohol, Orbán is sure to stay sober.