On July 1, Austria is taking over the presidency of the Council of the EU for six months. Who is its new, young chancellor, and what does he want? 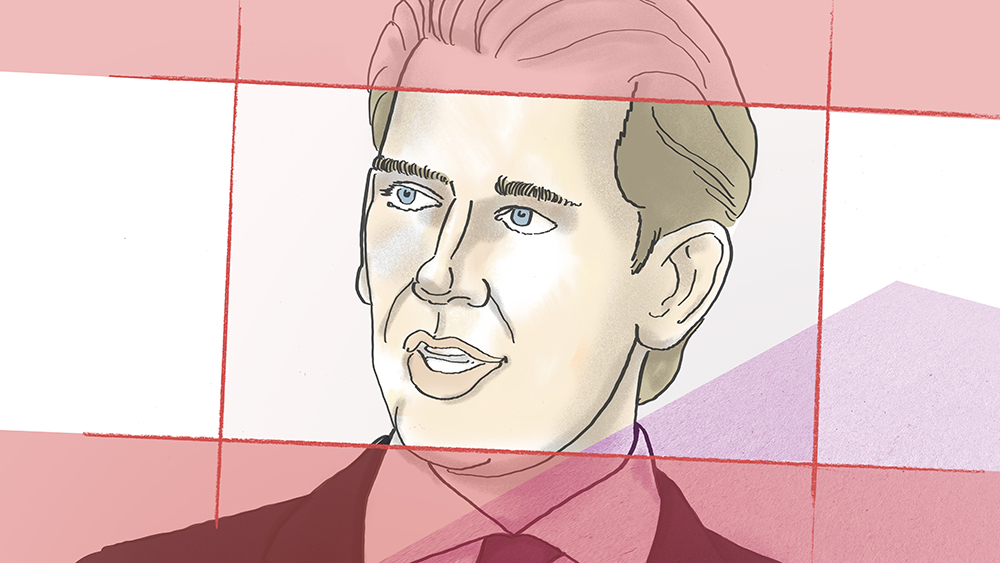 Sebastian Kurz knows how to party. Last Wednesday, he invited all of Vienna to a Sommerfest in the baroque Schönburg Palace, and he didn’t miss the opportunity to welcome every guest with a handshake. Wearing no tie, yet flawlessly dressed up, Kurz represented the new feeling in Vienna: In Europe, we are somebody again.

“Yes, but who?”, asked a few guests who had observed Kurz’s recent political travels. Austria’s conservative chancellor had just journeyed to Bavaria to visit the state’s Premier Markus Söder and support him in the “asylum fight” against Merkel. Meanwhile his Vice Chancellor Heinz-Christian Strache visited Italy’s new interior minister and agitator in chief, Matteo Salvini, and rhapsodized about a “Copernican Revolution in Europe’s asylum policy.” Two days after that, Kurz went to Budapest for a summit of Visegrad leaders, whom he has been defending from criticism. Kurz has even had time to call for an “axis of the willing”—an alliance of countries that want to proceed with a restrictive refugee policy. Kurz counts Vienna, Rome, and Berlin (or rather the CSU as the most conservative party in Angela Merkel’s government) among the willing, but also Copenhagen and Amsterdam. Kurz envisions these countries supporting militarized border controls and “protection centers” outside EU borders instead of the internal redistribution of refugees.

Is Kurz really the “rock star” of Europe’s new conservatives, as Trump’s ambassador in Berlin, Richard Grenell, declared to the right-wing readers of Breitbart? Is he really, right at the start of Austria’s presidency, aligning himself with Angela Merkel’s opponents and thereby positioning himself as a future conservative president of the EU Commission? The next EU elections are in 2019, the following ones in 2024—when Kurz will still only be 37 years old.

Perhaps is it really “the hour of Merkel’s antagonists,” time for the “axis of no principles”. That’s how Matthias Strolz, the former leader of Austria’s liberal and pro-European party NEOS, described the situation in an article in the German weekly DIE ZEIT. Strolz and Kurz were once friends. Today, Strolz does not hesitate to paint the Austrian chancellor as a henchman of international right-wing populists and Trump supporters—a man so perfectly equipped to destabilize Europe as if he had been designed for that purpose.

Perhaps Kurz is just a child of his time. A prototype of the next generation of European politicians, for whom the EU is not an indispensable union that arose out of the ashes of World War II, but an aging vehicle that must be completely renovated if it is to remain attractive for a generation that only knows the Iron Curtain from history books.

Celebrated as a Wunderkind

Kurz is young in years but old in political experience. He’s spent half his life in politics. As a teenager, he got involved with the youth organization of the ÖVP (Austrian People’s Party). In his mid-twenties, he became state secretary for integration, and then foreign minister—understandably, he was too busy to finish his law degree. Kurz comes from a moderate, middle-class background in Vienna. His mother is a teacher, and his father worked for Siemens until he started his own business. Sebastian was an only child, well-cared for and given every support. Disruptions, detours, rebellion—there was none of that.

His private life today is also unspectacular. Kurz lives with his high-school sweetheart, no kids, no pets—though he does like dogs, he explained in one of his rare private interviews. He also likes playing tennis and hiking in the mountains, and used to go windsurfing on Lake Garda in Italy. All in all, it’s an average-Joe background, perfect to identify with for many voters. It’s noticeable how carefully Kurz orchestrates his private life and controls the reporting about it. As a child of generation Facebook, he knows how to shape his image.

Europe is watching Österreich’s new chancellor with fascination, but also growing unease. After his electoral victory, the international press celebrated him as a “Wunderkind,” practically a Mozart reborn. But recently he gets compared more often to a different figure from Austrian history, namely Klemens von Metternich, the powerful, scheming master of ceremonies at the 1815 Congress of Vienna. One thing is for sure: this 31-year-old is no longer being underestimated.

“A Europe that Protects”

The motto of Austria’s Council presidency is “A Europe that protects” (a slogan borrowed from France’s President Emmanuel Macron), and Kurz takes that literally. To create this Europe, he believes that the EU needs a new, stronger border control comprising Frontex police and military units who can also take action in third countries and at sea. It should be able to send people back to “protection centers,” camps based outside the EU, where asylum-seekers would be held and processed before any of them would be allowed to cross Europe’s borders. These camps could be on the North African coast, though the new prestige project of the Austrian government foresees establishing them in the Western Balkans, perhaps in Albania, a country eager for EU accession.

As a foreign minister, Kurz helped close the West Balkan route to Europe in 2015 against all resistance and doubters. He praised the “Australian model” of setting up internment camps on nearby islands. Now he is working on closing off Europe’s external borders, as that would make superfluous the whole debate about distributing refugees within the EU according to quotas. Kurz does not foresee any compromise on that issue during Austria’s presidency. Closing off the external borders would also take the heat off the CSU’s proposal to reject asylum-seekers at the German border.

Already in the Austrian election campaign of 2017, Kurz styled himself as the savior of the West. He took over the ÖVP, a party that had shaped much of the country’s history after World War II, and converted it into a citizen’s movement. Now, the young chancellor is in his element at the EU level. He is testing what worked for him in Austria on a greater stage.

The election researcher Fritz Plasser analyzed Kurz’s rise in a recent book. “The refugee crisis of 2015 was the fault line. It created an epochal crisis topic that drove out everything else,” he wrote. By 2016, two-thirds of Austrians had the impression that something was going wrong.

But Kurz is smart enough to do more than promote himself as an anti-refugee rabble rouser. Of course, he rode a wave of migrant-related worry into the Chancellery. But at the same time, he remained the neat, polite, almost sycophantic son-in-law who charms the grandmother just as easily as her granddaughter. There is nothing radical about his behavior or manner, unlike his vice-chancellor Strache and many other members of his coalition partner, the far-right FPÖ (Austrian Freedom Party). He is the perfectly anodyne right-wing populist, a hardliner in the garb of a Christian Democratic Socialist.

If you’re looking for Kurz’s fundamental convictions, you will not find them on the classical axis between Christian socialist and free-market liberalism. As a teenager of the 2000s, he was shaped by September 11 and the global financial crisis. As an Austrian, the country’s “years of change” from 2000-2006 were a decisive experience. Back then, there was also a right-wing conservative coalition in power, with Wolfgang Schüssel (ÖVP) as Chancellor and the FPÖ as a junior partner. That government quickly set about dismantling Austria’s tradition of grand coalitions defined by social equilibrium and consensus. An air of neoliberalism, of freedom and personal responsibility, swept through the land. The feeling was that if you couldn’t cope, it was your own fault.

Kurz is so heavily influenced by such thinking that he doesn’t even question it. He and his political movement act like a startup looking for sponsors, crowds, and likes on the political market. Added to that is a deep skepticism about everything the establishment represents—even though Kurz himself comes from the establishment. Political correctness is “over-the-top.”

If the line about the “axis of the willing” was clumsy, given that there is a dark history of axes led by Berlin, Rome, and Vienna, it doesn’t bother Kurz. For him, the accusations from German commentators that he was using “Nazi rhetoric” are just part of senseless debates from a time when even his parents weren’t yet born. “I have a problem with people dictating which words I can use. I have a healthy grasp of history, and I don’t like to let Nazis take words like “axis” or “homeland” (Heimat) away from me,” he has argued. Older people might find that cynical, see it as calculated pandering to the politics of the past. But when Kurz uses it, it is just a sign of how much history his generation has forgotten.