The war in eastern Ukraine entered its fifth year this spring and shows no signs of ending. The Minsk agreement should lead to a political solution, but practically none of its points has been implemented. 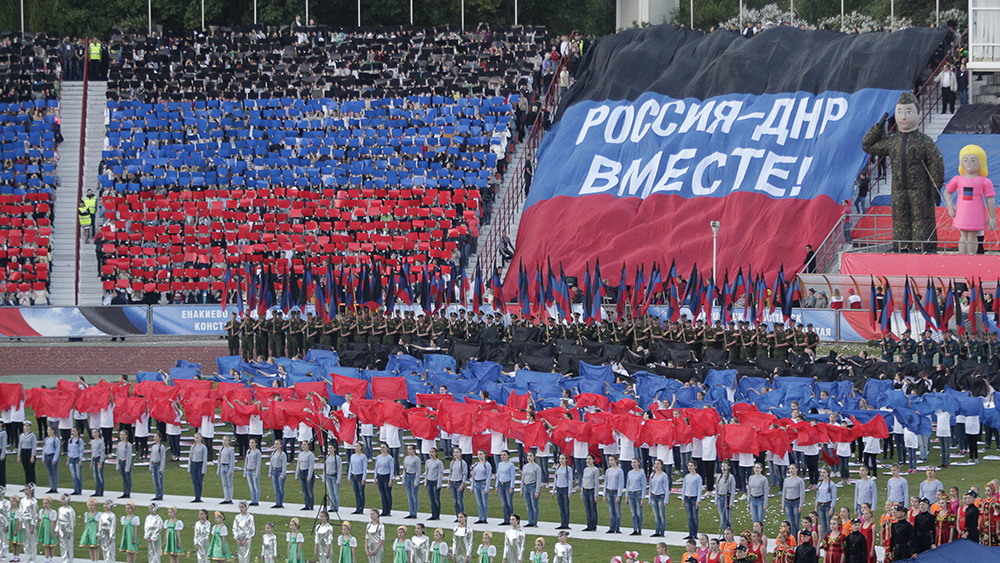 In the separatist-controlled areas of eastern Ukraine, some three million people are growing increasingly detached from the rest of the country. While there has been no official acknowledgement of the Kremlin’s influence, there has been plenty of evidence pointing to Russia’s role as the de-facto authority in the region. The leaders of the self-declared “People’s Republics” of Luhansk and Donetsk regularly declare that they see their future exclusively with Russia and only pay lip service to the Minsk agreement.

But the agreement, which stipulates that the government and the separatists negotiate a return to Ukraine, is deeply unpopular in Kiev as well. Legislators’ attempts to give the separatist areas a “special status,” as stipulated by the Minsk agreement, ended in August 2015, when four people were killed in clashes between police and right-wing activists outside the Ukrainian parliament. The protesters saw the move as a sell-out to Russia. Parliament subsequently failed to muster the 300 votes necessary to pass the legislation.

It was of little surprise then that a recent attempt by German Foreign Minister Heiko Maas to revive the peace process by convening his counterparts from France, Ukraine, and Russia for “Normandy Four” talks in Berlin on June 11 did not achieve an immediate breakthrough.

Instead, the bloody stalemate in Donbass looks set to continue. The frontline, dubbed “Line of Contact” by the Minsk negotiators, cuts arbitrarily through settlements and roads as well as electricity and water supply lines simply because this is where government troops and Russian-backed separatist forces came to a halt in February 2015.

It is perhaps the Minsk agreement’s only major achievement that the 500-kilometer long contact line has not been crossed since by a significant number of troops from either side. But that is due more to the consequences of military action than to actual compliance: the Ukrainians know that if they were to attack, Russia could swiftly send large military forces across the separatist-controlled border. The Russians and separatists, in turn, know that any military advance on their side is likely to be met by a much more professional and disciplined Ukrainian army—and likely another round of Western economic sanctions.

The respect for the frontline does not exclude exchange of fire, however, with wide-range indirect weapons such as artillery, mortars, and multiple rocket launchers in use by both sides. Despite the Minsk agreement’s stipulation that such heavy arms should be withdrawn from the front, they have been deployed nearly every time fighting has escalated since 2015.

What lies behind the outbreaks of violence if they won’t achieve significant territorial gains? It has become a sad ritual in this conflict to initiate deadly battles only to make tactical gains in the perceived information war between Russia and the West. One of the bloodiest phases took place at the end of January 2017, when at least 37 people, including seven civilians, were killed in and around a town north of Donetsk called Avdiivka.

Significantly, the fighting occurred in between two phone calls: on January 28, newly-elected US President Donald Trump called his Russian counterpart Vladimir Putin for the first time and pledged to seek cooperation over Ukraine and other issues. And on February 4, Trump held his maiden phone call with Ukrainian President Petro Poroshenko, in which he told him that the US “will work with Ukraine, Russia, and all other parties involved to help them restore peace along the border.”

Whether the outbreak of fighting was more in Ukraine’s or in Russia’s interest is not entirely clear. But Kiev has shown many times that it will try for even minor advances if the opportunity arises. Since 2015, government troops have moved into a number of small settlements located in the so-called gray zone. In November 2017, Ukrainian forces entered Hladosove and Travneve, two frontline villages in the Donetsk region, just when the Donetsk “People’s Republic” was busy sending troops to support a putsch in the neighboring Luhansk “People’s Republic.”

And in May, when rumors began swirling that Putin would sack his powerful aide Vladislav Surkov as the Kremlin’s Donbass point man, Ukrainian troops entered Chyhari, a tiny Donetsk settlement just west of the separatist-held city of Horlivka.

While moving closer to the contact line does not violate the Minsk agreement’s letter, it clearly goes against its spirit by increasing the risk of escalation. In some areas, the opponents’ frontline positions now lie less than 100 meters apart.

Events this spring also gave the Ukrainian military reason to feel emboldened. On May 1, the “Reintegration Law” handed command of the military operation in the east from the SBU security service to the Armed Forces, and the mission was promptly named “Joint Forces Operation.” The military was further rewarded with the delivery of long awaited US Javelin anti-tank missiles.

Last but not least, Ukrainian politicians are gradually shifting into campaign mode as the country prepares for presidential and parliamentary elections in 2019. President Poroshenko is expected to stand for another five-year term, but his approval ratings are currently at a miserable seven percent, according to a June 14 poll by the Kiev-based think tank Razumkov Center. Given the widespread patriotic and anti-Russian sentiment in the country, the government is unlikely to agree to any concessions in the Donbass.

On the Russian side, any hopes for change were crushed when Putin reappointed Surkov on June 13. The move came after a month of speculation that the long-time Kremlin spin-doctor would be replaced. Instead, the Kremlin is signaling a continuation of its previous policies: despite officially adhering to the Minsk agreement, Russia supports the separatists financially and militarily, while its state-controlled media keeps publishing anti-Western and anti-Ukrainian propaganda.

Can Peacekeepers Find a Solution?

Given these multiple impasses, it is understandable that negotiators have jumped on the idea of a UN peacekeeping force, something that was long promoted by Ukraine and suddenly endorsed by Putin in the fall of 2017.

However, consensus is proving elusive here, too, because Putin’s endorsement comes with strings attached. According to the Kremlin, the peacekeepers should only be deployed along the Contact Line, in order to protect the Organization of Security and Co-operation in Europe’s existing Monitoring Mission.

In theory, a round-the-clock observation of the frontline by armed UN peacekeepers might reduce the level of violence, as the unarmed OSCE monitors do not work in darkness for security reasons. But it is unclear how such a force could offer effective protection against well-armed and entrenched troops on both sides. Overall, the Russian proposal seems mostly designed to protect the current separatist civilian and military structures.

This is why Ukraine and most of its allies reject the Russian proposal and call for a well-armed international force that should take over control of the “People’s Republics,” including the state border with Russia.

The “People’s Republics” lie at the heart of another, more fundamental, dispute. Because of their illegal foundation, Ukraine and the West demand their dissolution. Kurt Volker, the US Special Representative to Ukraine, said in March that this is central to the Minsk agreement’s purpose of restoring constitutional order. “Implementing Minsk = dissolution of these illegal structures. Unwillingness to disband = unwillingness to implement Minsk,” Volker wrote on Twitter.

Russia and the separatists reject this. In a recent interview with Russia’s RIA Novosti news agency, the Luhansk “foreign minister” Vladislav Deinego argued that his “People’s Republic” would remain an “independent subject” entering into treaties with Ukraine.

While the Minsk agreement details a list of rights that includes a law-enforcing people’s militia, it stipulates that Kiev and the separatists hold a dialogue over their exact status. Nowhere does the document mention “People’s Republics;” it speaks of “Certain Areas of the Luhansk and Donetsk Regions” instead. It is important to remember, too, that the seperatist leaders also signed all three parts (Protocol, Memorandum, and “Package of Measures”) of the agreement.

When the agreement was signed, it was expected that the conflict could be settled within weeks or months. Three years later, the “People’s Republics,” despite being recognized by nobody except separatist South Ossetia, are on their way to becoming de-facto states with their own governments (Luhansk alone boasts 19 ministries), passports, vehicle number plates, school curriculums, diplomas, and so on. Their currency is the Russian ruble, and clocks are set according to Moscow time.

The longer people live (and die) in this reality, however imagined or illegal, the harder reintegration into Ukraine will get. Some hope that their sheer size might force Moscow to give up the “People’s Republics.” The subsidies necessary to feed the region’s aging populations—many young people and skilled workers are thought to have left—and sizable armies are estimated at well over €2 billion a year.

And while Ukraine has a mixed track record of winning the local population’s hearts and minds, showing off economic success can be a promising strategy. Already today, Ukrainian wages and pensions are significantly higher: in the Donetsk “People’s Republic,” an average salary is 10,000 rubles (€136), compared to 8,927 hryvna (€287) in government-controlled areas.

Supporting Ukraine, its economy, civil society, and democratic institutions therefore seems the most promising way to end the conflict in the Donbass. With an estimated one million crossings of the Contact Line every month, Ukrainian soft power may, in the end, prove decisive.