Home Berlin Observer How to Wear a Kippah in Germany

A government official’s warning that Jews in traditional dress might not be safe has sparked a new debate about how to protect the community. 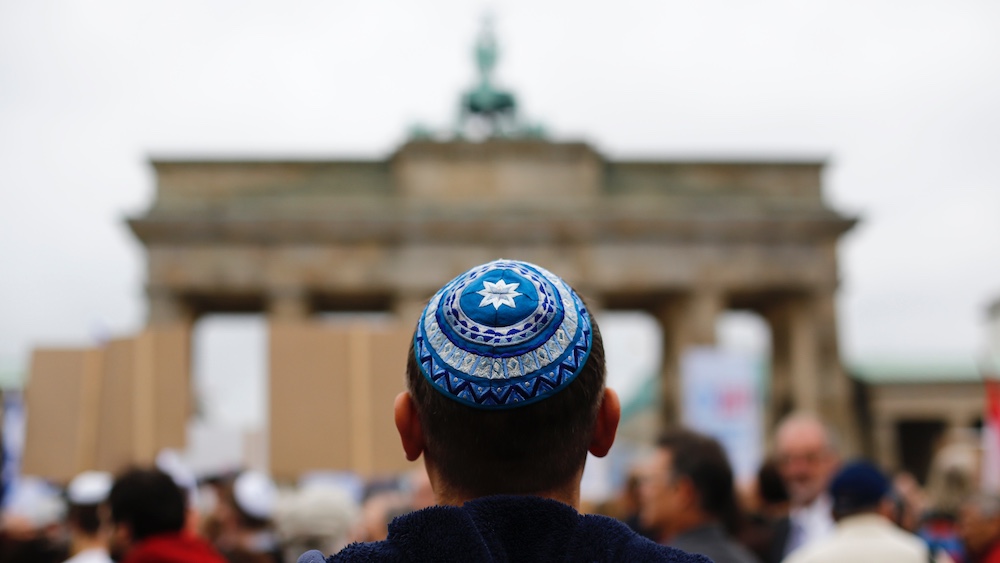 Is it unsafe for Jewish men to wear the traditional kippah (or yarmulke) cap in public in modern Germany? Or should Germans of all religions wear it proudly, as a sign of solidarity?

The fact that the German government official tasked with combating anti-Semitism represented both positions within a week shows how issue has, in recent years, become more relevant for all the wrong reasons.

The official, Felix Klein, warned of rising anti-Semitism on May 25, saying, “I cannot advise Jews to wear the kippah all the time and everywhere in Germany.” He blamed “society’s increasing brutalization and loss of inhibition,” adding that he had “unfortunately changed his position” on this issue in recent times.

The criticism came quickly. Jewish organizations have issued similar warnings in the past, but hearing it from a representative of the state charged with public safety was different. Michel Friedman, a former vice president of the Central Council of Jews in Germany, said that “the government is apparently failing to make [freedom of religion] possible for all Jewish citizens.” Israeli President Reuven Rivlin also got involved, saying Klein’s statement was a “capitulation” and “admission that Jews on German soil are again not safe”.

By May 27, Antisemitismus-Beauftragter Klein was explaining himself to the tabloid newspaper BILD, clarifying that his warning was meant to “shake up the public” and make clear the need for action. He received some support from the current president of the Jewish council, Josef Schuster: “It has been a fact for quite some time that Jews in some big cities are potentially exposed to danger if they are recognizable as Jews.”

Klein’s week in the news culminated with an appeal for Germans to wear a kippah in solidarity. He called on citizens to show their support by attending a counter-protest in Berlin against a planned march for Al-Quds Day, a “holiday” called into being by Iranian revolutionary leader Ayatollah Ruhollah Khomeini in the 1970s in order to protest Israel’s occupation of Palestinian territory—Al-Quds is the Arabic name for Jerusalem. Every year in Berlin, demonstrators display both anti-Israeli and anti-Semitic signs and, with Hezbollah sympathizers and even a few neo-Nazis in their midst, shout about their hate for Jews. It is illegal in Germany to burn flags or advertise for Hezbollah, but a ban on the protest would probably not hold up in court.

The police counted about 1,000 demonstrators at this year’s march, chanting slogans like “Child murderer Israel.” Opposite the Al-Quds marchers stood about 300 counter-demonstrators, with Israeli pop music blasting through their speakers.

A Sense of Insecurity

The official statistics back up the sense of insecurity in the Jewish community. While politically motivated crime was down from 2017, it was still at its third-highest level since 2001, when the statistic was introduced. The police recorded 62 violent anti-Semitic acts in 2018, up from 37 the previous year. The violence was only a small percentage of more than 1,800 violent anti-Semitic crimes, a category that includes hate speech or signs displaying banned symbols like the swastika.

The right wing of German society is primarily responsible for these anti-Semitic crimes. Interior Minister Horst Seehofer stated in May that almost 90 percent of these acts could be attributed to “right-wing crime”—as Foreign Minister Heiko Maas commented, anti-Semitism in Germany is obviously not an “import product.” The populist right-wing Alternative für Deutschland (AfD), which questions Germany’s culture of atonement for the Holocaust, is on the rise in the East; the people of Chemnitz, a city in Saxony formerly known as Karl Marx City, have in the last year alone witnessed both right-wing groups making Hitler salutes before attacking foreigners and the public celebration of a professed neo-Nazi at a football match.

But neo-Nazis are far from the only culprits; Islamic anti-Semitism is also a factor. Emblematic of Jews’ growing insecurity, a video of a Palestinian asylum-seeker from Syria whipping a kippah-wearing man with a belt in Berlin’s tony Prenzlauer Berg neighborhood went viral in 2018. A recent study by the Foundation for Remembrance, Responsibility, and Future found that anti-Semitic attitudes and behavior are disproportionately strongly represented among Muslim minorities in western Europe. Crucially, though, the study did not find a “meaningful relationship between the Middle-Eastern migrants and the extent and form of anti-Semitism in western Europe”.

That doesn’t necessarily mean there is no Islamist element to the threat in some big German cities, as the Berlin Al-Quds march demonstrates. Two Jews were attacked at that demonstration in 2018. There were millions of Muslims in Germany well before the refugee crisis of 2015. Benjamin Steinitz of the anti-Semitism research center RIAS has argued that there are  motives “from a Muslim context” and far-left and far-right motives for the crimes, as well “daily statements from the middle of society.”

Who Drew the Swastika?

Some German conservatives, especially the AfD, are eager to emphasize the Muslim element of anti-Semitism and obscure broader society’s role in order to score political points. But critics make a good point about the questionable reliability of the statistics Seehofer quoted to say right-wingers were “90 percent” responsible. For example, the Berlin police has admitted that it attributes cases without a clear motive to right-wingers. (When the crime is painting a swastika, this is somewhat understandable.) Klein himself told the New York Times that the methodology was flawed and he has asked the government to change it.

“The right strategy”, Klein says, “is to denounce any form of anti-Semitism.” In other words, for those treating belt whip wounds or scrubbing racist insults from their doors, it is less important who did it than that they be stopped.