Home Eye on Europe Is Italy Heading for the Door?

If one believes Italian Lega leader and Interior Minister Matteo Salvini, leaving the eurozone or even the European Union is a viable option. But the road to an Italexit would be a twisted one. 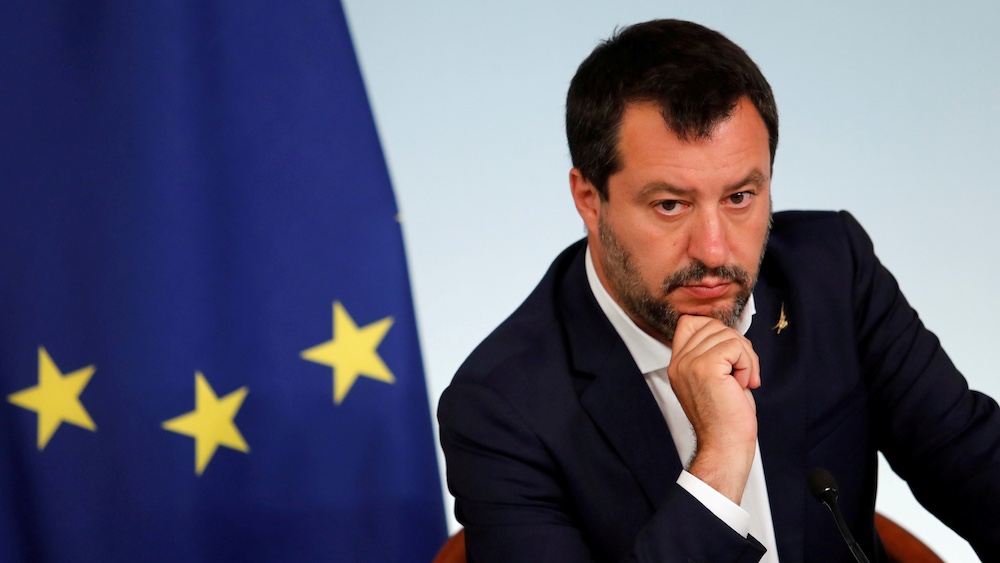 It’s a question that is being asked increasingly frequently these days: Does the nationalist-populist Italian government really want to lead the country out of the eurozone? Is that what Matteo Salvini, who is drifting further and further to the right, wants? The head of the Lega was effectively already setting the tone of the government, in his role as interior minister and vice-premier, especially when it comes to migrants. Now, ever since his party won the European elections with 34 percent of the votes, he seems to have effectively slipped into the role of head of government, determining financial policy and relations with the EU as well.

Salvini likes to use “Brussels” as a scapegoat. On the one hand it’s migration—the EU wants to turn Italy into Europe’s home for asylum seekers, he warns his supporters; on the other it’s “austerity policy”—which he says has brought Italy to its knees. Political scientist Vittorio Emanuele Parsi believes that his arguments are not always without merit. “Because it’s true that the EU’s measures have turned crises that could probably have been overcome with other approaches into chronic weaknesses. Salvini, however, is only focusing the spotlight on one part of the problems. He completely ignores the fact that Italy has also contributed to this.”

Salvini pulls out his motto “Prima gli italiani,” or “Italians first,” like a miracle weapon whenever the opportunity presents itself. That is particularly so now that the European Commission has recommended an excessive deficit procedure against Rome because the government did not abide by the agreements negotiated with Brussels in December 2018. Instead of falling, the national debt has risen further to 134 percent of GDP.

As expected, Salvini was unimpressed by this EU measure. “If the ones in the EU like to do so, they can go on sending letters,” he let Brussels know, arguing he would not let it dissuade him from his plan to introduce the promised flat tax—which would cost another €30 billion—because “it is not only our right, but our duty to reduce the tax burden.”

The suspicion that he might be up to something completely different, namely leaving the EU altogether, so-called Italexit, is not based solely on the harsh words spoken to Brussels, but on another initiative that comes from the Lega. Exactly two days after the European elections, on May 28, the Italian parliament approved a motion obliging the government to introduce “mini bots.”

The Bots Are Coming

The abbreviation “bot” stands for “Buono ordinario del Tesoro” and is a short-term debt instrument with which Italy finances itself, quite legally, on the internal and international markets. However, the situation is quite different with the mini bots already provided for in the coalition agreement. These are to be offered in small denominations, ranging from €5 to €500, have no expiry date, and primarily serve to repay the debts of public administrations to private companies. These amount to €57 billion. Companies would then be able to pay social and tax contributions. Many economists, however, see something else behind it, namely the first step toward a parallel currency.

And they may be right because the current Lega chairman of the budget committee, Claudio Borghi, declared exactly that in a 2017 video. The president of the European Central Bank, Mario Draghi, also seems to suspect plans for a parallel currency, which is why he spoke out against it at a press conference in Vilnius at the beginning of June. Either it is a payment instrument that is equivalent to money, which is forbidden in the monetary union, he said, or it is additional debt.

After the international sensation that the mini bots have caused, Premier Giuseppe Conte and Finance Minister Giovanni Tria, both of whom are independents and not members of either governing party, were eager to calm things down and assure people that these instruments would not be implemented. But where were they when the motion was tabled?

And the question that now arises is how far Salvini really wants to go. “Salvini will pull the brake at the last moment,” predicts economics professor Maurizio Ferrera who recalls an incident last November when a tranche of Italian government bonds remained almost entirely unsold. “There is talk of tens of billions of euros. Not even the Chinese had taken up the offer, even though they are among the most important buyers of our bonds. At that time Salvini was in a clinch with Brussels because of the Italian budget and the markets reacted nervously.” Ferrera believes it is quite possible that both the officials of the Italian National Bank and those of the government office persuaded him to act responsibly at the time.

Italy has to release government bonds on the market almost every month, and the more unstable the government is, and the wilder its economic and financial policy are, the more cautious the big investors become. And so, at the end of the year a deficit of 2.04 percent was agreed with the EU instead of the 2.4 percent initially demanded. The same could happen now. “Salvini must show consideration for his clientele,” Ferrera says. And a large part of them, at least in northern Italy, would not approve of a further increase in risk conditions and certainly not of Italy’s withdrawal from the euro. An opinion that Parsi also shares. “Salvini is a great opportunist,” he says. “He is only interested in one thing, the maintenance of power, not the principles.”

A Flash in the Pan?

But would an Italexit even work—for example, via a referendum, as in the United Kingdom? Parsi says no. “Our constitution prohibits them in the case of international agreements.” So, if Italy, in an extreme case, violated the treaties, it could only be thrown out of the eurozone. This is an option that had already been considered in the case of Greece, but then rejected, not least because German banks in particular would have suffered as a result. Ferrera also believes that while the other member states could bail out Greece that is not possible when it comes to Italy, which is also too big to fail. “But beside this, if there were a serious danger of being thrown out, our president, Sergio Mattarella, would intervene, address the nation, and bring the politicians back to their senses, I am sure of that.”

Since Italians know themselves since the economic crisis that they shouldn’t alienate the financial markets, the danger of an Italexit could prove to be a flash in the pan. It is doubtful, however, that there is going to be a more harmonious relationship between Rome and Brussels in the future, especially now that the new EU posts are due to be filled.

Today, three Italians hold top positions: Draghi, Antonio Tajani, the president of the European Parliament, and Federica Mogherini, High Representative of the EU’s Foreign and Security Policy. But that could change drastically now, and Italy risks having to settle for second-rank posts. If it were up to Salvini, he would like to see an Italian as the EU Commissioner for Economic and Monetary Affairs. But it is doubtful that this wish will come true.