Home Eye on Europe He’s Back

Yanis Varoufakis, Europe’s most-hated and most-loved former finance minister, is trying a comeback in Greek politics. What’s more, he’s in with a chance. 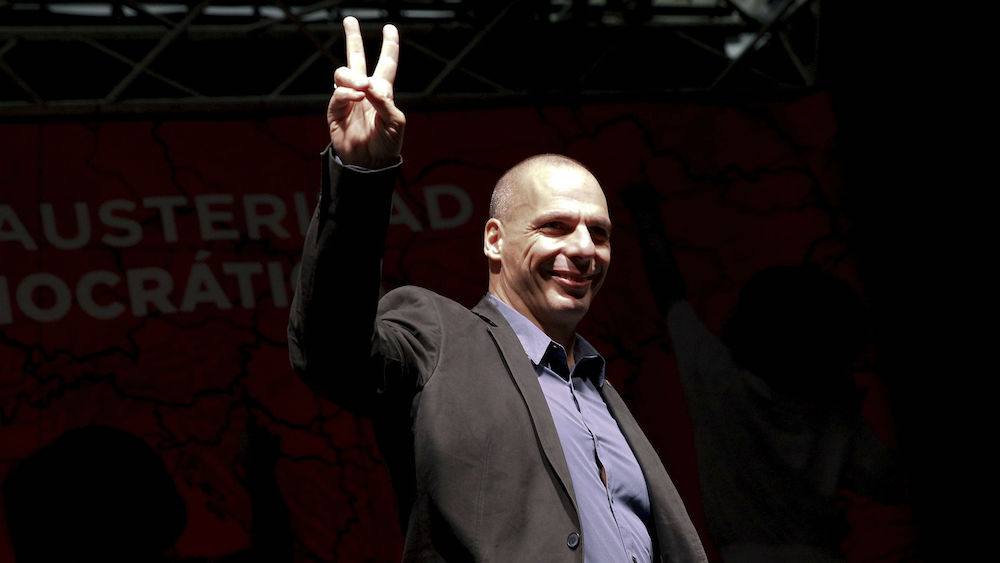 The man who outraged the EU in 2015 while trying to negotiate Greece’s debt restructuring officially announced the formation of a new party on March 26. Called, in English translation, the Realistic Disobedience Front, or MERA25, it is a coming-together of leftists, greens, and liberals.

The date of the party’ announcement was no coincidence, coming just one day after Greece’s national independence day. Varoufakis is indeed asking for independence, but this time from the country’s lenders.

It’s been almost three years since Varoufakis last tried to wrest back power from the country’s creditors. During the tumultuous six months he spent in talks with Christine Lagarde of the IMF and then-German Finance Minister Wolfgang Schäuble, he refused to sign another loan, instead asking for a debt restructuring. The end of the negotiations and his resignation came after Prime Minister Alexis Tsipras decided to go ahead and accept a third bailout in July 2015.

But Varoufakis didn’t stay on the sidelines for long. He turned his experience into a best-selling book, Adults in the Room; in February 2016, along with Croatian writer and activist Srecko Horvat, Varoufakis launched DiEM25, a pan-European political movement with the goal of reforming the EU and its institutions.

Over the last few months, however, Varoufakis has shifted his attention back to Greece and started campaigning across the country. For now, it’s a one-man-show: Varoufakis talks, Varoufakis presents the party’s positions, and Varoufakis answers questions.

I watched one of his campaign stops last month in Kalamata in southern Greece. It’s a traditionally right-wing city, but the small theater was full; some came because they were curious to hear what the economist-turned-celebrity had to say, while others were actively searching for a new party to support.

In his usual laid-back style, the eloquent economist called for “constructive disobedience” toward the country’s lenders: Because Greeks can’t stick to the “irrational austerity policies” that have “destroyed” the country, they have to disobey; but because merely disobeying isn’t enough, the government has to offer “realistic and responsible proposals” as well.

These are some of the proposals that make up what Varoufakis calls “urgent policy:” putting an end to home foreclosures until the real estate market picks up and the country is out of the crisis; reducing taxes, specifically VAT and those for small and medium-sized businesses, from 22 percent to 15 to 18 percent; instead of the current, “unrealistic” goal of 3.5 percent primary surplus, aiming for a 1 to 1.5 percent surplus

Other ideas include a public non-bank payments system to allow free transactions between the public and the state. If the banks are closed like in 2015, the state could borrow directly from the public, circumventing the financial markets while offering a much larger interest rate than the banks. Varoufakis also wants to restructure Greece’s public debt, protect wage labor (thousands of Greeks are employed as contractors without job security, and therefore have to pay their own health insurance), and end all fire sales of Greek public property; instead, he proposes to create a development bank that will use public assets as collateral in order to create investment flows into both public assets and the private sector.

At the campaign rally, one of the first questions to come from the public was a familiar one: to Grexit or not to Grexit? Varoufakis said he’s in favor of Greece staying in the EU, although Greece should never have entered it. But like in so many other cases, Varoufakis left us trying to parse his words.

“Grexit isn’t the worst thing that could happen, but it’s also not the best development for Greece,” he said, pointing out that the government’s agreement to a surplus of 3.5 percent until 2060 will have an even more devastating result than a Grexit would because it will mean another 40 years of austerity.

On the other hand, he said, a Grexit would deal a severe blow to thousands of Greeks in the short-term, but then the economy would bounce back in a few years. So it would appear he would support a Grexit. But then he added: “But I can’t take that responsibility,” leaving the crowd puzzled.

It won’t be a surprise if Varoufakis’ MERA25 gains Parliament seats in next year’s European elections. The current government has failed to improve conditions, and the promise that the country will leave the bailout program by August 2018 and start borrowing from the international market isn’t really appealing to people suffering from the ongoing crisis. Unemployment is still at 20 percent, and the quarter of the country’s GDP lost since Greece’s troubles began hasn’t been recovered.

What’s more, Varoufakis might be a menace and a champagne-socialist to his opponents, but for his voters he’s still the only Greek politician who refused to sign new austerity measures. Plus, he’s famous—and able to fill a political void that currently exists in Greek politics. Other than the communist party, there’s no other anti-austerity party in parliament. For Greeks the choice next year may look like this: endless austerity—or Varoufakis.