After a disastrous day in Brussels, Theresa May has three options. Whichever one she chooses, she is finished. 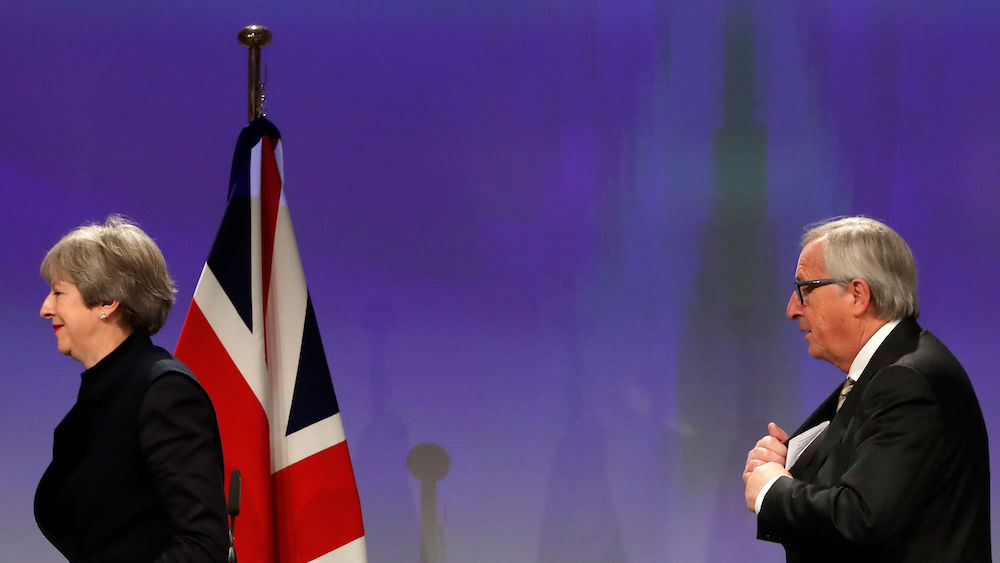 Europe and Northern Ireland are two issues that are considered toxic in British politics. Prime Minister Theresa May has somehow managed to get herself ensnared in both at once.

Monday’s lunch between May and European Commission President Jean-Claude Juncker was thought by many to be the last chance for an agreement to be reached on how the UK will leave the EU before it becomes too late to agree on a post-Brexit relationship by the leave date in March 2019. They had to get something on paper before a make-or-break summit of European leaders on December 14. But when May and Juncker emerged from their four-hour talks, they had to announce that there was no agreement. It immediately sent the pound plummeting.

May had come to Brussels hat in hand, having made an offer, after months of resisting, to honor the financial commitments the UK had made to the EU before taking the decision to leave. But that was only one key issue that needed to be resolved in order to begin talks on a post-Brexit deal. The other was the Irish border, and on that May was in a no-win situation.

May has said she wants a complete “hard Brexit,” taking the UK out of both the EU’s single market and its customs union. The problem is that the Republic of Ireland would remain in the customs union, putting it in a different customs zone than the UK for the first time since 1993, when the violence on the island finally came to an end. That would mean that customs checks would have to be set up at the land border between the Republic and Northern Ireland, destroying a central tenet of the EU-administered Good Friday Agreement.

Both London and Dublin say they do not want to see any such border infrastructure, which could destroy the hard-fought peace reached in the 1990s. But Dublin wants a guarantee to this effect before negotiations over the future UK-EU relationship can begin. The Irish government can force the issue, because they can wield a veto over Britain’s Brexit deal. And economists say a “disorderly Brexit,” in which the UK crashes out of the EU with no deal on its future trading relationship with the bloc, would be an unparalleled economic disaster for Britain.

On Monday morning, London finally relented and agreed to a draft text that said there would not be “regulatory divergence” between North and South in Ireland. May was, reportedly, ready to sign on the dotted line at her lunch with Juncker. For the first time in many months, it looked like the Brexit talks might finally make progress.

But then news of the language leaked, and the Northern Irish unionists erupted.

The only way to ensure no “regulatory divergence” between the North and the South would likely be to give Northern Ireland a separate status from the rest of the UK, allowing it to remain in the EU customs union and possibly also the single market. That would mean that the border would be shifted from land to sea – people would have to go through border checks when crossing from Northern Ireland to the rest of the UK.

That would put a border at the Irish Sea – or maybe even further East. In the course of the afternoon, after news of the agreed language got out, the leaders of Scotland, London, and Gibraltar – three areas which, like Northern Ireland, voted to remain – were all saying that their regions should also be allowed to have a separate status that keeps them aligned with the EU. Could the new border separate Scotland and England, and encircle London?

The Protestant Democratic Unionists in Northern Ireland believe that if the territory is given a separate status from Great Britain it will lead to the inevitable secession of Northern Ireland from the UK, and to a united Ireland – something they have spent their entire lives resisting. In fact, many in the Protestant camp have accused Dublin of using the border issue as a plot to trigger unification.

So when DUP leader Arlene Foster heard what was happening in Brussels, she called a hastily arranged press conference. “We will not accept any form of regulatory divergence which separates Northern Ireland economically or politically from the rest of the United Kingdom,” she said.

These were not just idle words. Following May’s disastrous snap election in June in which she lost her majority, the prime minister was forced to ally with Foster’s small Democratic Unionist Party in order to prop up her minority government. Foster can at any moment withdraw her support, causing May’s government to collapse and forcing new elections.

There is now confusion over whether May failed to communicate to Foster her plan to accept the new text before going to Brussels, or whether Foster supported it before but then changed her mind when she saw the backlash emerging at home when the news broke. In any event, May has left Brussels looking badly wounded and in an impossible situation.

Both May and Juncker insisted in brief statements after their meeting that they are close to an agreement and will resume talks on Wednesday, when May will return to Brussels. But everyone knows that the one issue left is the Ireland issue, and this may prove unsolvable.

If May returns to Brussels on Wednesday refusing to give a guarantee against a hard border, the Brexit talks collapse and her political position likely becomes untenable. If she returns with an offer for no regulatory divergence in Ireland and a border at the Irish Sea, Foster will withdraw unionist support and her government will collapse.

The only other option left to her is to accept no regulatory divergence for all of the UK. But this would leave the UK unable to strike free trade deals with third countries, and the acceptance of EU law, something which would likely spur a revolt from the hardcore Brexiteers in her party, who would topple her. They don’t want any relationship which leaves the UK subject to EU law.

In short, there is no answer May can give on Wednesday which does not politically destroy her.

The only hope for the prime minister is that Ireland relents on its demand, but this is an unlikely scenario. EU leaders have given their full backing to Irish Prime Minister Leo Varadkar’s insistence that the border issue be settled now before second phase talks can begin, and he doubled down on this in a press conference following the breakdown of talks. He said he was “surprised and disappointed” that May had suddenly changed her mind about the agreement.

What is perhaps most extraordinary about the situation is the level of power Ireland now holds over the United Kingdom, with which it fought a bloody battle for independence a century ago.

And despite the myriad warnings before the referendum, this is likely an issue most British voters never imagined would be reignited by Brexit. This week’s developments will embolden those who are calling for a second referendum.

Labor politician Chuka Umunna was already making that call shortly after May left Brussels. “Nobody would have thought at the time of the referendum that the negotiations would be this complicated, and that we would agree to hand over £50 billion only for talks to remain stuck in the mud,” he said. “The voters have every right to keep an open mind about whether leaving the EU is really the best future for our country.”

Of course, many people thought the negotiations would be this complicated, and indeed, they were loudly warning about it – especially in Ireland. But these warnings were largely ignored by the British media. Now is the reckoning.

May herself voted to remain in the referendum. If the prime minister’s political future is doomed no matter what she does this week, perhaps now is the time for her to make a bold gesture. Perhaps she should just look the British people in the eye and say “this cannot be done.”