While Portugal’s António Costa has managed to forge a stable partnership on the left, insurmountable divisions in Spain mean Pedro Sánchez may struggle to form a coalition even if he wins November’s vote. 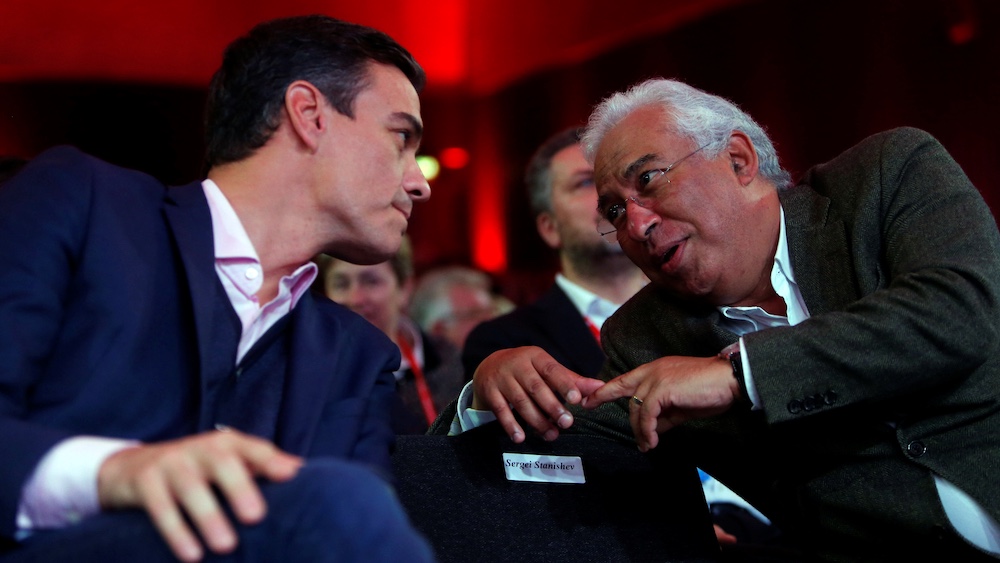 The parallels have been all too easy to draw. The center-left leaders of Spain and Portugal were both facing general elections and both were expecting their parties to emerge the strongest, thus looking to hold talks with parties to their left in order to be able to form new administrations.

But the similarities end there. In the wake of his electoral win on October 6, the Portuguese prime minister and leader of the Socialist Party (PS), António Costa, now dominates a political arena characterized by moderation and consensus. By contrast, Pedro Sánchez, Spain’s acting prime minister and leader of the Socialist Workers’ Party (PSOE), finds himself in a much more polarized and unstable landscape going into the country’s November 10 election, the fourth national vote in as many years.

Although Costa fell 10 seats short of the parliamentary majority he would have liked, his victory was nonetheless a resounding endorsement by Portuguese voters of the geringonça, or “contraption”, the nickname for the three-way leftist partnership he has led since 2015. His government has kept the country’s economic recovery on track while reversing much of the austerity introduced by his predecessors.

In the October 5 election, his PS strengthened its presence in parliament. Forming a new administration looks more straightforward than it was four years ago. He could attempt to repeat a deal with either of his previous partners, the Left Bloc (BE) and the Communist Party, or involve other, smaller, forces on the left.

In Spain, the upcoming election and its fallout promise to be more heavily fraught with dilemmas and difficulties for Sánchez.

The 47-year-old already won a general election in April, with his party emerging as the largest share of votes but still falling short of a majority. After five months of impasse he was unable to gain the support he needed from other parties in order to form a government, triggering this repeat ballot.

The PSOE’s most natural ally in the wake of the April election appeared to be Podemos, to its left, which leads the Unidas Podemos coalition. But the two parties clashed over the format of a potential new government, with the PSOE wanting a Portugal-style governing partnership and Podemos preferring a formal coalition which would give it control of several cabinet portfolios.

With policy detail barely discussed, the talks descended into a public, and increasingly personal, spat between Sánchez and Podemos leader Pablo Iglesias.

“What people are seeing is the left losing—once again,” said Gabriel Rufián, a member of parliament representing the Catalan Republican Left (ERC), as the clock ran down on an agreement. He was invoking the Spanish left’s repeated and well-documented failure to unite when under pressure. He also warned that it might be more difficult for Sánchez to form a government after a new election, as political storm clouds threatened to gather throughout the autumn.

Since taking office as prime minister in June 2018, Sánchez has been touted as a standard bearer for the Europe’s center-left. Young, internationally minded, and outspoken on issues such as the importance of a strong EU, climate change, and feminism, he has been seen as an ideal counterweight to the right-wing populism sweeping Europe.

Yet the recent political paralysis has stalled the implementation of his progressive vision for Spain and put his more internationalist ambitions on hold.

Initially, polls had suggested Sánchez’ Socialists would benefit from a repeat election, gaining seats and making them less reliant on other parties to govern. But the political fragmentation which began in Spain half a decade ago, with the arrival of Podemos and then Ciudadanos further to the right, continues. A new party, Más País, led by the young former deputy leader of Podemos, Íñigo Errejón, has emerged in recent weeks and is expected to take votes from both of the other main parties on the left.

Also complicating the panorama is the issue of Catalonia, which has been dominating the political agenda in recent years. As the territorial crisis has refused to fade, it has polarized and often poisoned the national political debate.

Sánchez’s PSOE positions itself as a moderate unionist force, opposed to Catalan independence and the right to self-determination but seeking to calm tensions by finding common ground with those in the north-eastern region wanting to break away from Spain.

The parties to Sánchez’s right have cast him as weak on the issue, or even a willing participant in the Catalan independence project. The conservative Popular Party (PP) used this message in the April election, as did Ciudadanos, while the far-right Vox owes much of its recent rise to its extreme brand of unionism.

Such discord on this highly emotive issue has added to the lack of post-electoral consensus. Ciudadanos, which has lurched to the right since beginning as a centrist party, refused to consider talks with the PSOE to form a new government after the last election. More recently, the party’s leader, Albert Rivera, appears to have softened his stance but remains wedded to an uncompromising approach to Catalonia which makes any deal with Sánchez difficult, particularly if he should also need the support of Catalan or Basque nationalists.

Moreover, the Catalan crisis is expected to flare up again with the imminent announcement of the verdict on the case of 12 pro-independence leaders who went on trial earlier this year for their role in the region’s controversial and unsuccessful bid for secession in 2017. The election campaign is therefore likely to take place amid turmoil in Catalonia and renewed tensions with Madrid.

However, Spain’s current polarization is fueled by history as well as geography. Ever since taking office, Sánchez has been trying to exhume the remains of the dictator Francisco Franco from his huge mausoleum outside Madrid and bury them somewhere more appropriate for such a divisive figure. The plan has been repeatedly delayed by legal and bureaucratic hurdles. With the supreme court recently ruling in favor of the exhumation, it is possible that Franco’s body will be transferred before the November 10 election.

The idea of the exhumation is popular among left-leaning Spaniards. However, Franco nostalgists, who are a minority, angrily oppose the move and the political right deems it an unnecessary stirring up of the past. If and when it happens, it promises to add yet another element of animosity to Spain’s riven politics.