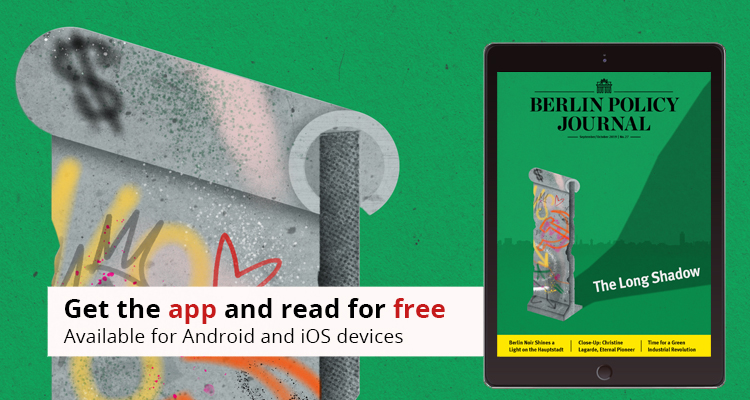 The myth of the West is waning in Central and Eastern Europe.

“More Honesty Would Be a Wonderful Idea”

The post-1989 period brought economic success to Central and Eastern Europe. A new generation now needs to update the model.

Who Gets to Claim History?

The image of a close Putin-Xi friendship can be deceiving.

As Brexit looms, Scotland’s first minister may get another opportunity to make the case for leaving the United Kingdom.

Meat Tax Back on the Menu

Another refugee crisis could be looming. Yet so far the EU has been divided and passive.

No Climate Denial at the Pentagon

Germany has had some success integrating refugees.

Another Belt and Road Port?

“Ibizagate” has shaken Austrian politics. But plus ça change…

The internet giants like to present themselves as foreign policy actors on equal footing with nation states. They are not.

An unlikely government coalition has turned Portugal around.

The UK’s new prime minister steers the country towards a hard Brexit. An early election looms.

The attempt to meddle with the 2017 French presidential election failed. But it is vital to draw the right conclusions, and prepare.

The Devil’s in the Detail

The international debate about AI ethics has only just begun.

Berlin is en vogue as a film and television backdrop, but some cliches die hard.

Is the German Question Back?

Some fear that American withdrawal from Europe would lead to German hegemony. But that’s unlikely.