Berlin’s booming film industry has branched out into television streaming services that are reaching a wide international audience. What sells best are stories taken from the cityʼs checkered past. 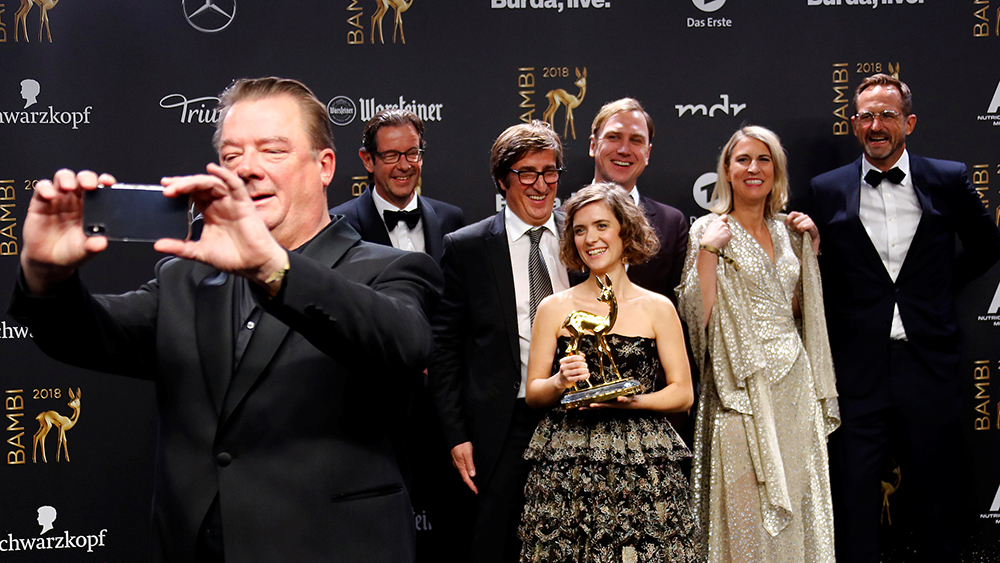 Anyone who subscribes to a streaming service has likely noticed that Berlin is having an extended on-screen moment. In the last several years, the German capital has served as the backdrop for so many mainstream films and hit shows that it’s taken on a leading role of its own.

Brutal and foreboding in the Weimar-era crime drama Berlin Babylon, teeming with intrigue in spy thrillers Berlin Station and Deutschland 83, or rolling over to expose its dangerous underbelly in Dogs of Berlin, the city is often characterized by decadence, transgression, and dark political conspiracy.

“The international series hype around Berlin began with Homeland at the latest,” says Nadin Wildt, whose 2016 book Filmlandschaft Berlin: Großstadtfilme und ihre Drehorte chronicles the city’s cinematic role from silent films to Hollywood blockbusters. “They are continuing with the best-loved themes and narrative patterns of the Berlin film: the Golden Twenties, the Cold War, and criminality—not a new image.”

Even an innovative series like Netflix’s sci-fi thriller Sense8 portrays what Wildt calls “cliché Berlin.” But there’s no sign that producers or audiences are bored with Berlin noir just yet. This winter major streaming services announced further seasons for already popular shows along with a new crop of titles set to be filmed here. Among the new titles are Netflix’s Unorthodox, an adaptation of Deborah Feldman’s bestselling memoir about escaping from an ultra-orthodox Jewish sect in New York to build a new life in Berlin, and Amazon Prime Video’s We Children of Bahnhof Zoo, a fresh take on the biography of teen addict Christiane F., whose experiences in the West Berlin drug scene of the 1970s had already been immortalized by a cult film featuring a cameo and soundtrack by David Bowie.

Viewers are “thirsty for local shows and the best local voices,” Amazon’s head of international originals James Farrell told Variety magazine in February. Shows like German crime drama You are Wanted, the company’s first international production, have had “great customer reaction,” he said. The company is committed to giving viewers “authentic stories, set in their own countries, and to invest in characters that can reflect their own experiences and diversity,” head of Amazon Studios Jennifer Salke added.

While the spirit of inclusion is certainly a positive sentiment, another motivating factor in this trend has also been at play. In June 2018, the European Commission revised its Audiovisual Media Services Directive (AVMSD) to address the growing popularity of on-demand streaming services, which must henceforth “ensure at least 30 percent share of European content in their catalogues” and “give a good visibility (prominence) to European content in their offers,” the body said in a statement following approval by the European Parliament.

Streaming services have grumbled about the quota, but the commission insisted that it “should not be a significant burden for businesses,” citing a 2015 study by the European Audiovisual Observatory that found European films already made up 27 percent of on-demand film listings in the EU, with Netflix at 21 percent, for example.

But years before this policy update, a number of factors had coalesced to turn the spotlight on Berlin in the international film and TV industry. The country already boasted an esteemed film heritage, state-of-the-art production infrastructure, a handful of celebrated directors, and a reputation for training serious professional actors. What tipped the scales was targeted and abundant federal and regional funding that lured international creators into taking a closer look at creating a unique film scene of their own in the city.

Since its founding in 2007, the German Federal Film Fund (DFFF) has contributed a staggering €709 million to 1,300 film productions—474 of which were international co-productions. The DFFF estimates that the result has been subsequent investment of some €4.2 billion in the German film industry. By May this year, the regional Medienbord Berlin-Brandenburg reported it had already handed out over €13.4 million for a number of projects, including the next seasons of two successful series: Neflix’s Bad Banks 2 and Amazon Prime Video’s Deutschland 89.

Through a Foreign Lens

The booming film industry means that Berliners have become accustomed to living among film sets, with the city reporting 5,300 registered shooting days in 2018. Residents are also getting used to seeing their home through the lens of foreign interpretation, which can sometimes be a breathtaking departure from their reality. When the trailer for Hollywood rom-com Berlin, I Love You, was released in January, it was met with a collective eye-roll and the suggestion that perhaps the city’s film persona had finally reached its jump-the-shark moment. National daily Die Welt called it an “affront” with a shocking lack of diversity and “the most primitive film ever made about Berlin.” While “the Berlin mythos has already moved many creatives to disturbing effusions,” this particular film ought to be used to “illustrate everything that is going wrong in German film,” the paper said.

Starring Kiera Knightley and a host of other big names, the film was released in Germany in August. It was funded in part by Medienbord Berlin-Brandenburg as part of French producer Emmanuel Benbihy’s “cities of love” series, which also included Paris je t’aime and New York, I Love You. The trailer jubilantly promotes tattered tropes about Berlin as a permissive wonderland of self-discovery, suggesting that “people come to Berlin to dance, to dream, and to fall in love.” Knightley’s character apparently finds herself by making the unlikely (and probably illegal) decision to adopt a Syrian refugee boy off the street.

Some characters are more authentic than others, and while this particular incarnation of Berlin may be distasteful to residents, Hollywood distributors will ensure that it reaches a wide audience, further shaping the international view of the city. It’s a place that lends itself to endless re-interpretation, precisely because it is in constant flux, a metropolis that has re-invented itself often throughout history.

This may be Berlin’s biggest allure. In times of widespread political and existential anxiety, perhaps it is comforting to chronicle how the city has maintained its singular attitude. Each new production carries the potential for the artists involved to take creative ownership of the city and funnel their vision into the collective imagination.

“The Berlin film boom has certainly changed the image of Berlin and Germany internationally,” says Berlin film expert Wildt. Films like Run Lola Run have portrayed the city as “colorful and dynamic,” but most productions are still heavily concerned with the history of the Third Reich and the Cold War, she says. “Unfortunately the internationally successful films such as The Lives of Others don’t necessarily provide an accurate portrayal of historic events, though the imagery is pretty close to what the city was like then.”

Nevertheless, these productions are bringing more interest and tourists to the city, she says. Not to mention creative film professionals from abroad who are adding their voices to the cultural narrative and endeavoring to create more nuanced portrayals of the city and “to show the queer, diverse Berlin that doesn’t take itself too seriously.” And while these productions don’t always reach an international audience, their thoughtful portrayal may eventually reach viewers whose gateway to Berlin opened through a gritty Netflix crime series.

“The Berlin clichés are old and numerous,” says Wildt. “But films that also portray an authentic Berlin are out there. I’m not worried about the Berlin film.”