The Green Party’s core policies are global in nature, from protecting the environment to defending human rights and democracy. Acting through the EU is the basis of all Green foreign policy. 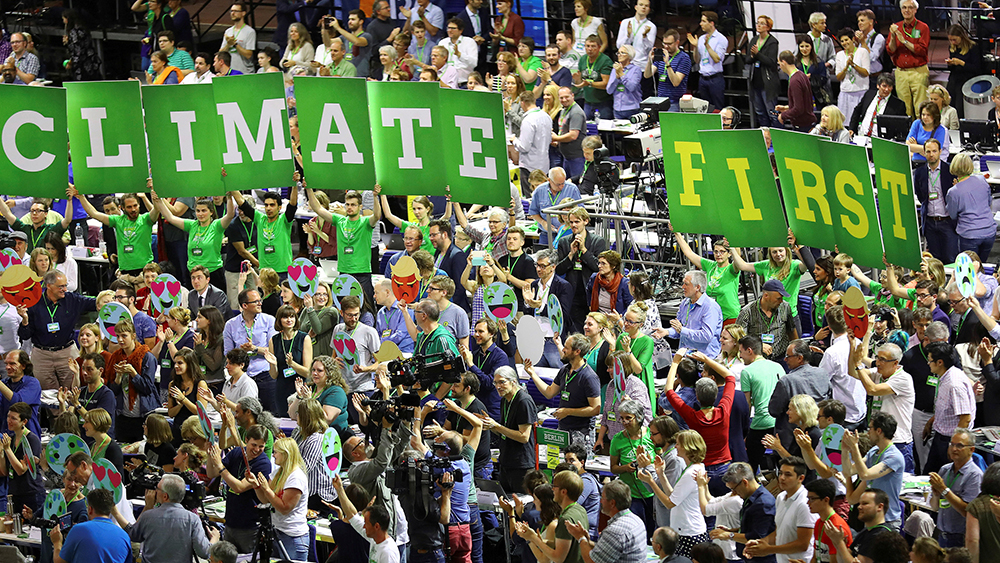 Germany’s Green Party has foreign policy built into its DNA. The main impulse that led to its foundation more than 40 years ago was the protection of the environment: the global challenge par excellence. Many core issues of Green politics are global and are treated as such: the pursuit of civil liberties and an open, multicultural society, the struggle for human rights and democracy, which can only succeed if these values are shared by as many people and countries as possible, and, not least, the quest for a more equal distribution of wealth and opportunities on a global scale.

The big question of course is how these goals can be achieved. Countless times the party has discussed the policy consequences of its founding tenets, most ardently how to interpret the principle of nonviolence in the light of international crises and mass atrocities.

An overarching understanding has emerged over the last 20 years: we have defined the European Union as the model and the basis of our foreign policy.  The EU is the most successful attempt yet to move beyond national boundaries, to leave behind years of bitter and often violent enmities, to help create freedom and prosperity, and to forge an albeit imperfect consensus on the shared values of democracy, human rights, and the rule of law. German foreign policy must therefore always be conceived as part of a European foreign policy.

We aim to strengthen the rules-based international order under the auspices of the United Nations. With the goal of transforming foreign policy into global domestic policy, we want to reform the workings of the UN. To succeed, the UN and other international organizations must ultimately shed structures that perpetuate power balances dating from the post-World War II era. Yet to achieve this reform we must strengthen the UN—despite its many shortcomings. If we want the power of law instead of the law of the powerful, the UN is the only way to move forward.

For example, the idea of the responsibility to protect is one of the steps on the way to protecting the powerless. It demands that the international community shield those whose own governments cannot or will not defend them from the most egregious forms of violence, first and foremost by political means, but in extreme cases also by military force. Of course, we as Greens have to come to terms with the serious blows this idea has suffered for example in Syria, where the UN Security Council, blocked and unable to act, has once again shirked its responsibility to keep the peace.

Green foreign policy assumes that international peace and the strengthening of democratic values go hand in hand. Today, however, we have to deal with challenges to both peace and democracy. Even in Europe, which we once believed to be a safe haven for democracy and the rule of law, authoritarian movements have been on the rise for the past decade. Paradoxically, these nationalist movements that target the universality of human rights and undermine international rules have quite an outreach. Leaders like Matteo Salvini and Vladimir Putin essentially speak the same language, the one funding the other.

These movements cannot be countered by adopting their language and concerns. A clear commitment to international cooperation, to social and ecological justice, and to the principles of human rights are the only way to win the argument. This includes a clear stance on one of the most contentious issues: migration. In an ever more interconnected world, the idea of closing our borders in order to maintain ethnically homogeneous nation states is clearly absurd. A pragmatic migration policy must take economic, political, and humanitarian aspects into account. It must serve each country’s economic interests, but not exclusively so.

Migration policy also has to protect European states from blackmail attempts by authoritarian leaders in Africa and the Middle East who play on the fear of mass migration. They offer to stop migration; in return, Europe is meant to close its eyes to their abusive and authoritarian rule. Their politics, however, are not in our interest. And if we are willing to accept a certain number of migrants from their countries, their threats quickly dissipate. Of course, keeping up the principles of the Geneva Convention is another cornerstone of the values-based approach to foreign policy. The tragedy in the Mediterranean Sea, which we have been witnessing for years now, puts European values to shame. We urgently need a coordinated effort for the rescue and distribution of these migrants and refugees as well as an effective asylum system to decide who can benefit from humanitarian protection.

Diplomacy, civil crisis prevention, as well as economic development are some of the most important tools of such a foreign policy. If Germany and Europe want to take more responsibility on the international stage, we must strengthen our capacities in these fields. This particularly regards the German Foreign Office, which is notoriously understaffed and underfunded.

Yet as we have painfully learned, peaceful means are often not enough to keep violent conflict at bay and prevent mass atrocities. In some cases, a military intervention by the international community or parts thereof is necessary as a means of last resort to create space for diplomacy and other civilian efforts.

This means maintaining a capable and efficient military force. Yet arbitrary spending goals, such as NATO’s much-discussed two-percent goal, do not constitute reliable benchmarks. It is far more important to combine forces with our European partners to make our common defense more effective. A similar argument applies to arms exports. Selling weapons to states involved in armed conflicts or human rights abuses on a massive scale may contribute to lowering the price for armaments needed in Europe. However, apart from the obvious moral fallacy of this argument, the political and economic costs of the conflicts fuelled by these weapons in the long term far outweigh any minor gain in the short term.

The challenges that our planet is facing are immense. Climate change is the most existential and pressing. But it cannot be addressed in isolation. The changes it requires to many of our habits can only be achieved politically if we can achieve a more equitable distribution of global wealth. This is an integral part of foreign policy. It includes an overhaul of the policies of institutions such as the IMF and a rethinking of international trade relations. Global trade must be organized in a way that reduces rather than exacerbates inequality. European agricultural subsidies, for example, distort agricultural markets in Africa and the Middle East and keep these countries from opening their markets in a way that would benefit both sides.

Climate change is not the only development that has a profound impact on international relations. The new era of digital communication has also changed the traditional role of states in foreign policy. This gives renewed importance to an approach we Greens have favored for a long time: a deepened engagement with civil societies all over the world, both digitally and physically, and a commitment to their freedom of action. The ties resulting from such policies are essential to overcoming many an impasse encountered on other levels.