The former Romanian anti-corruption prosecutor wants to become the EU’s top prosecutor. But the government in Bucharest, like other member states accused of misusing EU funds, wants to stop her. 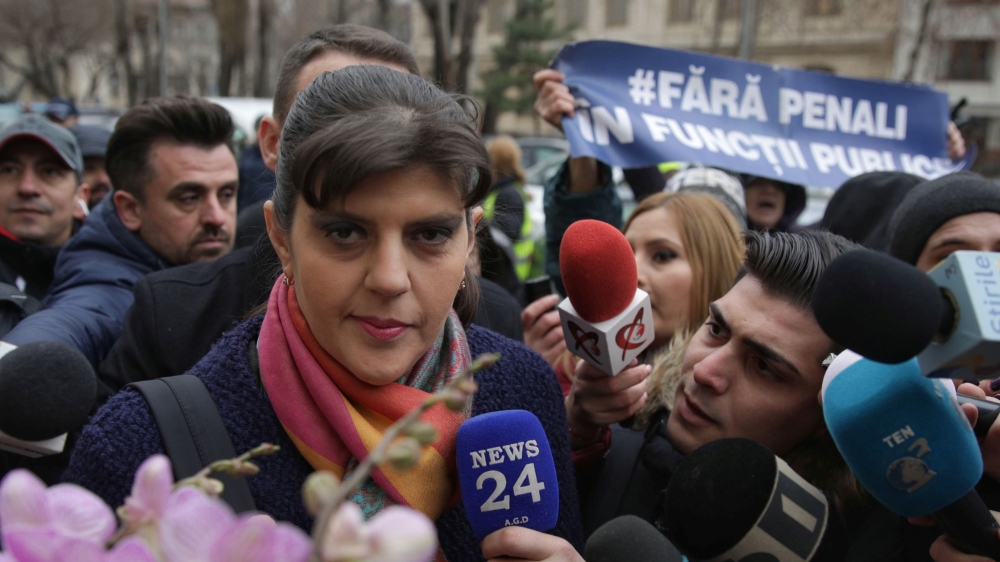 European Parliament committee hearings are normally quite mundane. But then again, they aren’t usually centered around Laura Codruta Kovesi.

Kovesi is Romania’s star anti-corruption prosecutor. And when she took the floor in Brussels in to make her pitch to MEPs for the EU’s new top prosecutor job, she had journalists scrambling for spots and some European lawmakers applauding her sharp rebuttals.

“I am aware that you have been exposed to a lot of negative information about me. I have absolutely nothing to hide,” Kovesi told MEPs last Tuesday (26 February), whose bid for the politically sensitive European Public Prosecutor’s Office has been under siege by Romania’s Social Democrat-led government, which currently holds the EU’s rotating presidency.

The 45-year-old former professional basketball player rose to fame in Romania as the unrelenting prosecutor who has run the National Anticorruption Directorate (DNA) since 2013. Under her leadership, the DNA has launched thousands of investigations, exposing high-level corruption and helping bring about the sentencing of – as she told MEPs – over sixty high-ranking officials, such as ministers and lawmakers.

“You have given us a sense of confidence in the Romanian system,” Ingeborg Grassle, a powerful German MEP leading the budget control committee in the parliament told Kovesi during the hearing.

Cleaning up Corruption in Bucharest

Romania ranked 25th among the EU’s 28 countries on the 2018 Perceived Corruption list compiled by Transparency international, ahead of only of Bulgaria, Greece, and Hungary. However, Kovesi’s efforts have given Romanians new trust in their anti-corruption institutions. According to a 2015 poll, Romanians trust the DNA as much as the Orthodox church, a startling success in one of the most religious countries in the EU, where mistrust in the state is deep-seated.

Kovesi, who also served as the youngest general prosecutor of Romania – a country where judicial reform and anti-graft fight have been under scrutiny by the EU since it has joined the bloc in 2007 – has caught the attention of transparency advocates and the European Commission, which said in its 2016 report on Romania’s judiciary that “the track record of the key judicial and integrity institutions in addressing high-level corruption has remained impressive.”

To her supporters, Kovesi is a heroine standing up to a corrupt political elite; to her critics she is a zealot who has used her powers excessively with a broad interpretation of “abuse of power”. Indeed, Kovesi has not shied away from stepping on the toes of the powerful. Last June, Liviu Dragnea, chair of the ruling Social democratic party (PSD) and de facto leader of the country, received a three-and-a-half-year prison sentence for abuse of office (pending appeal). In 2016, Dragnea had already received a two-year suspended sentence for election fraud, preventing him from serving as prime minister.

The PSD-led government first came for Kovesi last February: the justice minister called for her dismissal, accusing prosecutors under her command of falsifying evidence and saying Kovesi had harmed Romania’s international reputation. While Romanian President Klaus Iohannis initially refused to sack her—he is also a political opponent of Dragnea—a Constitutional Court ruling supporting the government’s position meant that Iohannis was unable to stop her dismissal. A month after Kovesi’s departure, an estimated hundred thousand Romanians took to the streets to protest against the government’s legislative changes weakening the rule of law.

Then when Kovesi decided to seek office on a European level, the Romanian government launched a campaign to stop her. Kovesi announced in December that she would run for the office of the European Public Prosecutor, a new body created with the support of 22 member states to investigate and prosecute fraudulent use of EU taxpayer money. But she faces concocted charges of malfeasance, bribery, and perjury from a new agency set up by Bucharest. She denies the allegations.

The race for the EU job

The Bucharest government’s efforts to undermine Kovesi’s candidacy put a spotlight on the race. Kovesi was picked by an expert panel to be the best for the job. However, a secret-ballot vote among EU ambassadors ranked a French candidate, Jean-Francois Bohnert as favorite. Kovesi came in second, together with Germany’s aspirant.

Does she have enough support to get the job? While Romania’s campaign against its anti-corruption champion ruffled feathers in western European capitals, it is a problem for any candidate when his or her country is not supporting the bid, an EU diplomat said.

With the two relevant European parliamentary committees firmly supporting Kovesi, the parliament will start negotiations with the representatives of member states, led by the Finnish EU ambassador and including the Portuguese and Croatian ambassadors (whose countries will give the next EU presidencies), to decide on who will get the job in the end.

Bohnert, the French candidate who addressed MEPs in several languages, is a strong candidate and a safe bet with his experience in helping to set up Eurojust, the EU’s judicial cooperation agency.  He told lawmakers that fighting corruption could make the chief prosecutor’s office a new tool to boost democratic trust in the EU, but added that as a prosecutor he would not “name and shame” member states when asked by an MEP what he would do in countries where EU money fraud is systematic.

But Kovesi’s possible rise to power – she would be a rare eastern European woman in top EU position still dominated by western European men – isn’t just unnerving politicians in Bucharest. She has also become a symbol for anti-corruption campaigners in Bulgaria and Hungarian opposition politicians railing against graft in prime minister Viktor Orban’s government.

Maltese center-right MEP and anti-corruption campaigner Roberta Metsola welcomed Kovesi at the parliament hearing by saying that “in spite of every imaginable obstacle being put in your way, your dignified courage in the continued onslaught has inspired people across the continent”.

Kovesi’s candidacy also sheds a light on the EU’s efforts to keep a closer eye on how eastern and central European countries spend EU funds. Last year, the commission tabled proposals to link EU funding to the health of the rule of law in member states in an attempt to sanction those governments that threaten the independence of the judiciary.

The commission’s proposal is already interpreted in Warsaw and Budapest as a political attack on eastern member states. Kovesi’s appointment could send a strong signal from the EU to countries on the eastern flank and member states with systemic corruption issues–but selecting such a politicized figure could also prompt a backlash there.

Hungary and Poland are already among the six EU countries that have opted out of the prosecutor’s office, fearing further oversight by EU institutions in the affairs of national governments. Budapest and Warsaw’s interference in the independence of their judiciaries has already triggered an EU sanctions procedure for both countries.

While the member states hope to agree on the top prosecutor by the end of March, negotiations could drag on for months if the parliament and EU countries dig in their positions. “This is all very dramatic,” MEP Claude Moraes, chairman of the civil liberties committee, quipped during the parliament vote on the nominees.