Nearly four months after the elections, Germany is inching toward a new government. On Europe, Merkel’s prospective coalition set out ambitious goals; on domestic issues, they remain uninspired. Yet even this latest paper is only an interim agreement. 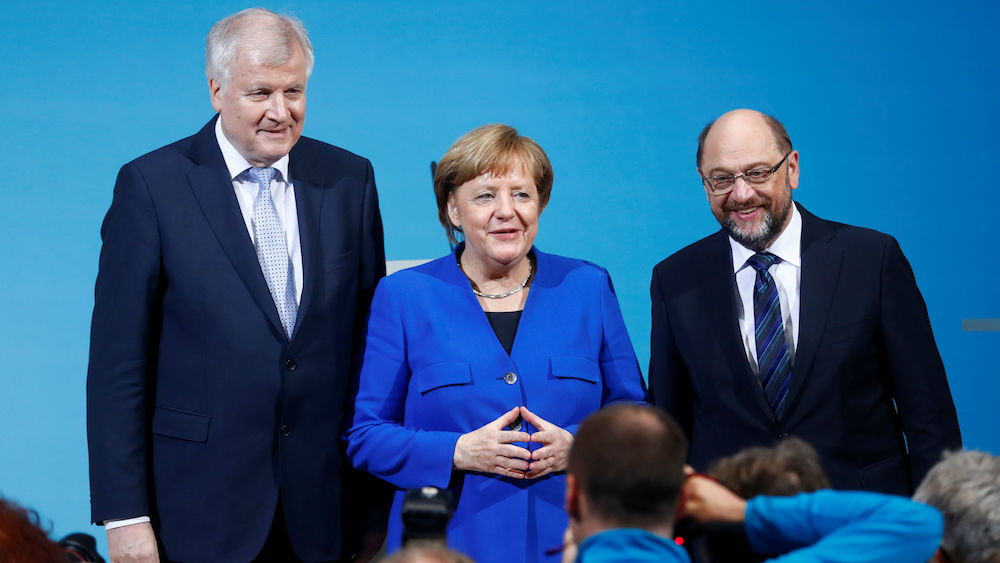 In principle, it’s good news for Europe. On January 12, Germany’s coalition hopefuls finally agreed on an outline for the next four years. Remarkably, they put European reform at the top of their list. The very first chapter of their 28-page agreement, headlined “A New Beginning for Europe,” promises the EU more money, changes in governance of the euro, and much closer cooperation with France.

“The renewal of the EU will only succeed, if Germany and France work together will all their might,” the agreement says. “We want to develop common positions on all important questions of European and international policy and move ahead in those areas where the EU with all 27 member states is not able to act.”

Brave words and good intentions. But don’t break out the champagne yet, not even if you are Emmanuel Macron, President of France, and truly desperate for Berlin to move forward on EU reform. Ever since Germans elected a new Bundestag on September 24, the country’s political process has been excruciatingly slow. With Angela Merkel, the country has had a capable caretaker chancellor, but without the power to enter into new commitments.

“We are in favor of allotting specific budget resources to economic stabilization and social convergence, and for supporting structural reforms in the eurozone, which could be the starting point for a future investment budget for the eurozone,” the agreement says. “We are also willing to agree to higher German contributions to the EU budget.”

Yet even this latest paper, laboriously negotiated and full of details, isn’t actually a coalition agreement. It only represents the outcome of the “sounding-out talks” that the potential government partners held to see whether there they would have enough of a common base to even enter coalition talks proper.

A lot of steps remain to be taken before a new government can actually be sworn in: the prospective partners must get party approval for the outcome of the sounding-out talks before being able to enter formal coalition negotiations. Even if those come to a positive conclusion, that result once again has to be approved by all three parties concerned. Everything would have to go really well to have a government in place before Easter.

What a staggeringly inefficient process—and what a shock to Germans and other Europeans alike to see Merkel, who always seemed entirely in control of the most stable country in Europe, floundering so badly. With every day that goes by without a new government in place, Merkel’s standing within her party, her country, and the world erodes further. And the most difficult hurdle may still be to come.

After Merkel’s attempts to form a coalition with the Greens and pro-business Free Democrats fell apart, the SPD very reluctantly agreed to rethink its position—but large parts of the SPD’s base remain unhappy about this decision. SPD leader Martin Schulz and his colleagues dare not go over their heads. That is why, at every step of the way, an extra party congress is needed to give its approval.

This has given the Social Democrats a strong hand in negotiating with Merkel and her conservatives. In fact, much of the sounding-out agreement is now geared towards pleasing their party base. Germany’s prospective coalition agreed to spend more on education and employment, increase payments for pensioners and child benefits, and moderately reduce taxes on low incomes. The pro-European bend of the deal is also largely due to the SPD’s input.

Conservative “wins” include limiting the number of refugees admitted to Germany and not increasing taxes on high incomes. Altogether, the outcome on domestic issues is far less ambitious than on Europe.

To approve the deal, the SPD has convened a party congress for January 21; whether it will agree is anybody’s guess. Over the past days, a regional party meeting already voted to reject the agreement. Several prominent Social Democrats also publicly criticized the deal and demanded improvements on a multitude of issues. This was sharply rejected by Merkel’s conservative bloc, which in turn gave rise to more SPD outrage.

Should this end in a “No” to the deal, all three party leaders involved in the talks face disaster. At the head of the SPD, Martin Schulz is certain to be replaced right away. The CSU’s leader Horst Seehofer would also be likely to go. And Angela Merkel? She may not even want to lead her party into new elections, let alone have the authority to do so.

Even so, we aren’t there yet; a “Yes” is still possible, and even likely. In that case, Germany would finally get its new government and Merkel would return as chancellor. In domestic terms, this may be boring. For Europe, it would actually be the best outcome.