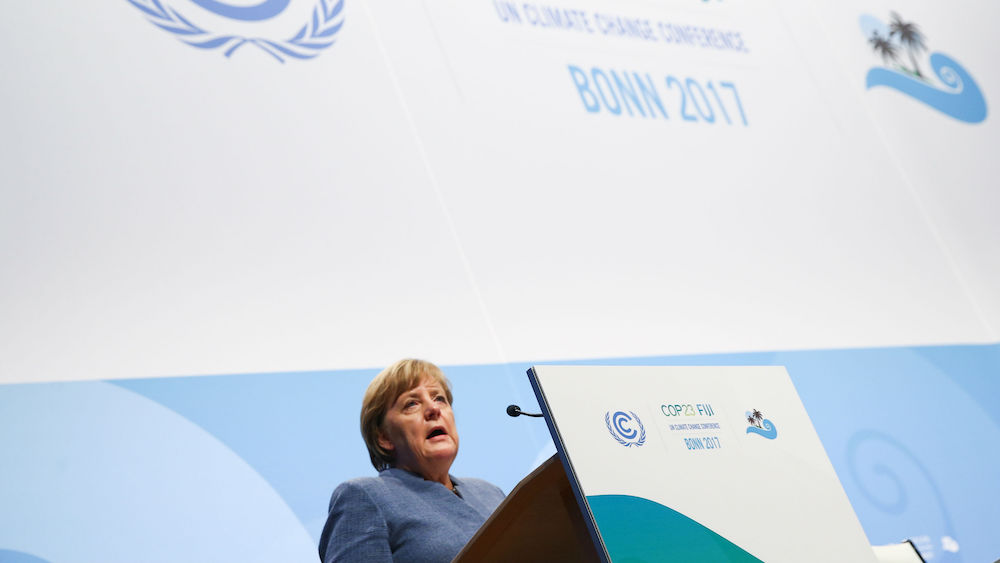 It was hailed as a breakthrough: nearly four months after the election Chancellor Angela Merkel’s conservatives and the Social Democrats agreed to launch formal negotiations on forming a government together, again. In a 28-page draft policy agreement, the negotiating parties listed the compromises they had spent weeks wrangling over – and skirted around the issues where no agreement could be reached.

During negotiations, the two sides appeared ready to drop German-authored plans to lower carbon dioxide emissions by 40 percent from 1990 levels by the year 2020 because it simply wouldn’t be feasible – the country has only managed to slash 27 percent until now. In the end, however, they kicked the can further down the road, appointing a commission to create a blueprint for reducing emissions as quickly as possible and gradually phasing out coal power.

It is a glaring departure from the green image Germany has built. Just a handful of years ago, the country’s Energiewende, or energy transition, was seen as a shimmering example of how the world could beat climate change that the German term itself—rather than “energy transition” or “clean energy revolution”—was being used in American media.  This was its raison d’etre – and the physicist-chancellor Angela Merkel appeared fully convinced of its promise, which she showcased in international climate conferences, winning her the moniker die Klimakanzlerin, or the climate chancellor.

And even though renewable energy generation in Germany broke more records in 2017, growing to cover an astounding 36.1 percent of the country’s electricity needs, that won’t offset the country’s rising carbon emissions enough to meet its own goal of reducing greenhouse gas emissions by 40 percent in 2020.

Germany commenced its Energiewende less than two decades ago by breaking up the monopoly of a few giant utilities and setting market conditions for wind and solar power, as well as bioenergy, to become one of the economy’s primary sources of power. In addition, it created over 300,000 jobs, local revenue for rural areas, and cutting-edge exportable technology.

Inspired by Germany’s ingenuity and gumption, I undertook to learn everything I could about Germany’s visionary experiment by visiting the citizen-prosumers on the ground from the Baltic Sea to the Black Forest, and interviewing the Energiewende’s thinkers. I authored a blog about Germany’s clean energy revolution and wrote dozens of articles for English-language media. For five years, I lived and breathed the Energiewende, convinced that Germany was a determined pioneer in an effort that would keep our planet livable for future generations of human beings and other species.

Yet, despite Merkel’s vigorous push after the meltdown at the Fukushima power plant in Japan in spring 2011, Germany’s commitment to the mission has since fallen off dramatically. It is now a middling contender in the field of climate protection, ranked a lowly 29 out of 61 countries worldwide by the NGO Germanwatch. About two years ago, I noticed that there was ever less new hailing from Germany to write about. I cancelled my blog.

There’s a good measure of hypocrisy in the way Germany continues lecturing other countries like the US about climate protection while it falls ever further behind on its own 2020 emissions reduction goals. As much as Washington deserves a lecturing on the topic, Germany no longer has the cachet to do it.

These days Berlin even plays the spoiler, throwing its weight around in the EU to the detriment of progressive environmental legislation, as it is currently doing on the EU’s long-awaited climate and energy package—seminal legislation, currently in draft form, that will underpin the transformation of the European energy system until 2030. Germany has pushed to weaken provisions that would open up energy markets to citizens’ initiatives and other new business entrants – the very actors who ignited the grassroots Energiewende in the first place.

One reason for Germany’s demise as climate leader is not public opinion, which overwhelmingly backs the Energiewende and is fearful of climate change. On the contrary, it’s Germany’s grand coalition of Christian Democrats (CDU/CSU) and Social Democrats (SPD), which will most probably be renewed this year for another four-year term. Indeed, Germany’s two biggest parties came to power four years ago talking not about hitting Germany’s emissions targets or prompting the Energiewende’s next exciting breakthrough, but rather about how to slow it down. And this they did.

Chancellor Merkel still pays lip service to climate issues, but her party’s commitment to Germany’s automobile industry is obviously greater. She’s illustrated this by pushing to lower emissions standards for cars made in the EU, allowing the EU carbon trading scheme to collapse, and turning a blind eye to the testing standards of Germany’s diesel gas-guzzlers.

The Social Democrats, her partner in office, haven’t been any better, putting the interests of a small number of coal miners and recalcitrant fossil fuel companies above those of the planet. Germany burns more coal than any other country in Europe; state-subsidized, coal-fired plants provide 37 percent of its power, most of it from lignite, the dirtiest kind of coal. At the recent UN climate summit (in Bonn, Germany, of all places), the Germans refused to join a coalition of 19 countries led by Canada and the UK to set a date for ending coal use. In fact, new coal pits are still being excavated in the west of the country.

The grand coalition’s tepid endorsements of renewables and its changes to support systems have caused investment in renewables to drop to its lowest since 2007; permits to build onshore wind parks have been capped at just 2.8 GW a year through 2019—a gross underachievement compared to the 4.6 GW of installments in 2016.  New investment in and deployment of solar power is lagging in a similar way. Moreover, half-hearted energy savings measures failed to stem the still-rising volumes of oil and gas used in transportation, heating, and industry.

This is absolutely the wrong moment for Germany to be curbing renewables. Despite the fact that Germany’s renewables have replaced many gig watts of fossil-fuel generated energy, Germany’s emissions have not declined significantly over the last decade. Although this is in part explained by the economy’s growth, the country’s total emissions increased every year over the last three years.

Merkel long ago forfeited her title as climate chancellor, failing time and again to stand up for the climate. She barely mentioned the environment in her election campaign this year (the Social Democrat candidate Martin Schulz wasn’t any better on the topic).

While it’s hard to fall lower than US federal climate protection polices under the Trump administration, I’m not surprised by Trump’s negligence. But I hadn’t expected Germany to balk so suddenly.

After Trump’s election victory and the looming prospect of America’s retreat from the global stage, there was immediate speculation that Germany would assume the mantle of leader of the free world. This, of course, was never a serious option considering Germany’s humble military and skittish geopolitics. But it could have stepped in and led the world on climate protection.

Not so long ago, German energy specialists immodestly called the Energiewende “Germany’s gift to the world.” It was. Now, the least Germany can do is not to play the spoiler.