Home Bullets and Bytes “Do Not Test Israel’s Resolve” 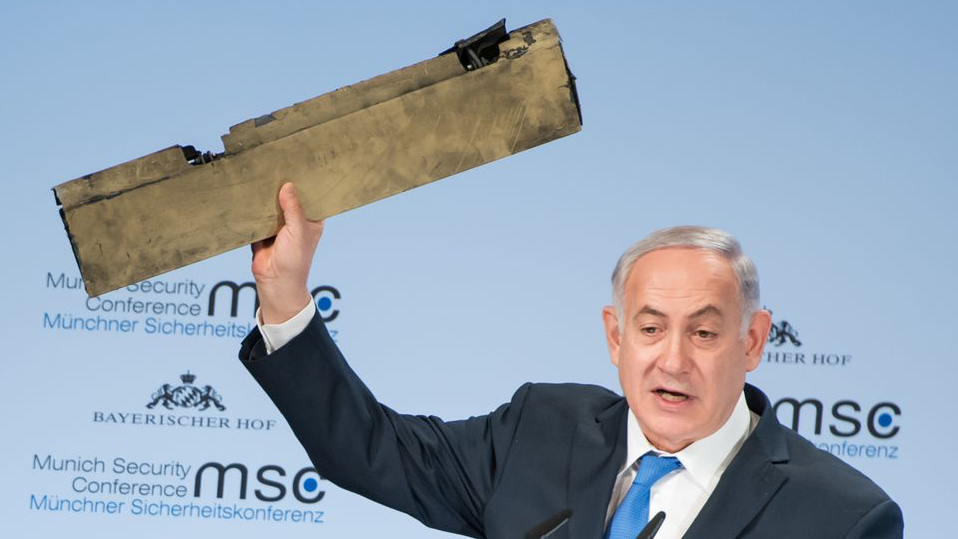 Leave it to Benjamin Netanyahu to save the drama for the last day of the Munich Security Conference. Netanyahu, taking the stage for the first time at the MSC, brandished a long, rusted piece of metal in the middle of his speech to participants—a piece, he said, of a drone that entered Israel from Syrian airspace last week, sent by Iran.

“Mr. Zarif,” he called, referring to the Iranian foreign minister, not in the room but due to speak later in the day. “Do you recognize this? You should—it’s yours,” he challenged. “Do not test Israel’s resolve.”

Netanyahu appealed to participants to see Iran as the nefarious threat to global security he believes it really is; he denounced the Joint Comprehensive Plan of Action (JCPOA), the nuclear agreement with Tehran, as dangerous appeasement, drawing a parallel to the 1938 Munich agreement that gave Hitler free rein (noting that there were indeed many differences between Iran and Nazi Germany). He pulled out a second prop as well—a map to show participants his perspective of Iran’s steady march of domination across the Middle East.

In a clear shot at the conference participants, European delegations in particular, the Israeli leader added that if Washington does not certify the nuclear deal, countries must choose who they want to do business with—Iran or Israel.

A stony-faced John Kerry, one of the chief architects of the JCPOA, struck back in the following session on the stage, saying the deal was working and calling Netanyahu’s assessment “fundamentally inaccurate;” if your house is on fire, he asked, would you put it out in 15 years or put it out now and ensure it doesn’t catch fire again?

Turkey’s foreign minister Mevlüt Çavuşoğlu, who shared the stage with Kerry on a panel on the Middle East, blasted Washington’s support of Kurdish YPG fighters in Syria with training and weapons: “Supporting one terrorist organization to fight against another terrorist organization is a big mistake,” he said. “This is outrageous.”

Iranian Foreign Minister Mohammad Javad Zarif later denied any desire on Tehran’s part to become the hegemonic power of the region. Rather, he proposed a step-by-step approach to build an “inclusive” security architecture for the Gulf region—but not inclusive of Israel, though. Zarif sidestepped an opportunity to acknowledge Israel’s right to exist in a response to a question. Immediately after Zarif’s speech, Saudi Foreign Minister Adel Al Jubeir called upon the world “to extract a price from Iran for its behavior.”

These sessions wrapped up an otherwise muted weekend in Munich, with world leaders, ministers, and dignitaries grappling with questions that resembled the previous gathering on European and global security—with little focus on the main stage on the opportunities and risks technology will pose in those very challenges.