The second day of the Munich Security Conference laid bare some of the challenges facing Europe and the global community, with Russia and Turkey taking the floor. 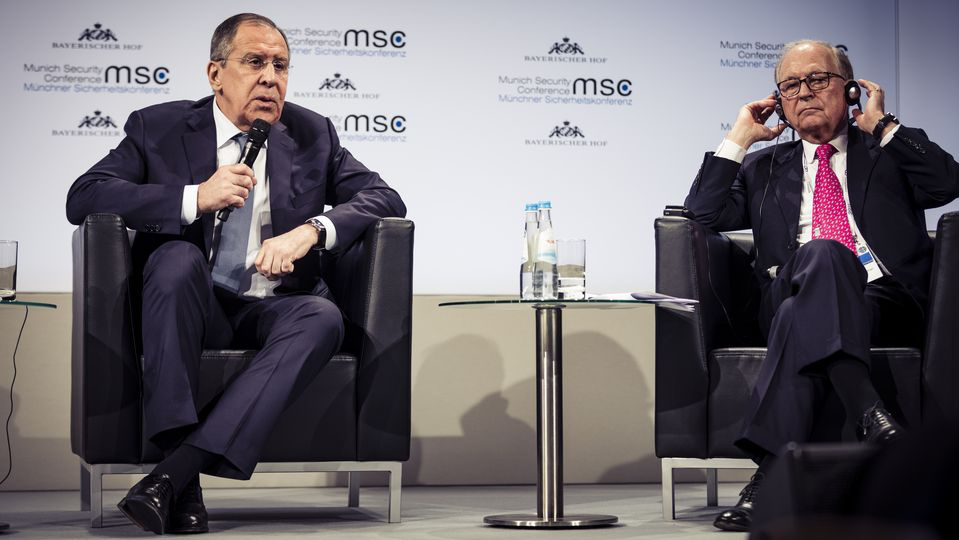 Ask Sergey Lavrov what he thinks of the news that 13 Russians were indicted in the US Friday for election meddling in America’s election and his answer, as might be expected, is unequivocally dismissive: It’s “just blabber,” he said, until the facts are presented (the documentation supporting the indictments doesn’t count, apparently).

Lavrov took the stage on Day Two of the conference to deliver a speech very much reminiscent of those he has given at previous MSC gatherings, accusing the West of peddling anti-Russian propaganda and lamenting its inability to accept a resurgent Russia. He referred to the ongoing conflict in eastern Ukraine as an internal battle, one where the Kremlin was a force of good in trying to find a resolution, adding that Ukrainians had been given a “false choice” between the EU and Russia.

Fittingly, Lavrov was followed directly by US National Security Advisor HR McMaster, who said there was no “incontrovertible proof” of Moscow’s meddling in the US election. When asked if Washington would be ready for cyber dialogue with Russia, he quipped “I’m surprised there are any Russian cyber experts available, based on how active they have been in undermining our democracies across the West.”

McMaster also sought to reassure Europeans that Washington was not turning its back on the transatlantic alliance and its commitment to global security, despite numerous signals from the current president last year indicating the opposite. He highlighted the shared values, freedom, and rule of law that bound Europe and the US but reserved harsh words for Iran and what he sees as a deeply flawed nuclear agreement.

Curiously, when asked how his support for European partnership squared with his very own Wall Street Journal op-ed last May, where he and Gary Cohn described the global community as a dog-eat-dog, zero-sum world, he insisted the dogs on either side of the line were democratic and non-democratic countries, not Western allies.

The second day, devoted to “the future of Europe,” as MSC Chairman Wolfgang Ischinger said, launched a marathon of nine speeches from leaders and ministers – and it was thorny at times, revealing the rifts and departures in the European and global community. Here are some of the highlights:

– Turkish Prime Minister Binali Yildirim, who took the stage after the news Friday that German-Turkish journalist Deniz Yücel had been released from custody after being held for a year without trial in Turkey, bristled at questions over Ankara’s crackdown on journalists. He argued that Turkey is “a state of law just like Germany and the US,” adding: “Nobody has the right to question the state of law in another country (sic).”

– Sebastian Kurz, Austria’s new chancellor, expressed the need to reform and improve the EU while making a clear overture his far-right partners in government, speaking of strengthening “Europe’s Judeo-Christian traditions” (an interesting preview of this summer when Austria assumes the presidency of the EU Council).

– Polish Prime Minister Mateusz Morawiecki triggered consternation when he defended his country’s deeply controversial Holocaust bill (which made it illegal to accuse Poland of complicity in the Holocaust) by arguing that there were “Polish perpetrators as there were Jewish perpetrators.” On defense, his quip that Europe needs “steel tanks, not think tanks” is also not likely to go down particularly well among a crowd comprised of quite a few think tankers.

– Theresa May arrived at the conference after having met with Chancellor Merkel for what appeared to be polite yet not particularly fruitful talks in Berlin. May doubled down on the UK’s deep commitment to European and global security, but also her government’s commitment to honoring the Brexit decision. She proposed a EU-UK security treaty that ensured close cooperation on security and intelligence after Brexit, adding, somewhat ominously, that a failure to nail down a bespoke deal would have “damaging effects for both sides.”

– Germany’s foreign minister Sigmar Gabriel opened the day’s roundup of speeches pointing to China as one of the largest challenges facing the West, warning: “China is developing a comprehensive alternative system unlike ours that is not based on freedom, democracy, and human rights.” While emphasizing the irrefutable importance of US partnership in forging a stable global community, he added: “Nobody should try to divide the EU – not China, not Russia, but also not the US.”

Looping the US in with Russia and China is a telling indication of how wary Germany and indeed Europe are of Washington’s true objectives. It’s interesting to note that Gabriel might well have been re-applying, in a way, to keep his job, or paying farewell. The post of foreign minister in the next German government is very much up in the air.

We’ll have a wrap up of the final day of the MSC tomorrow.