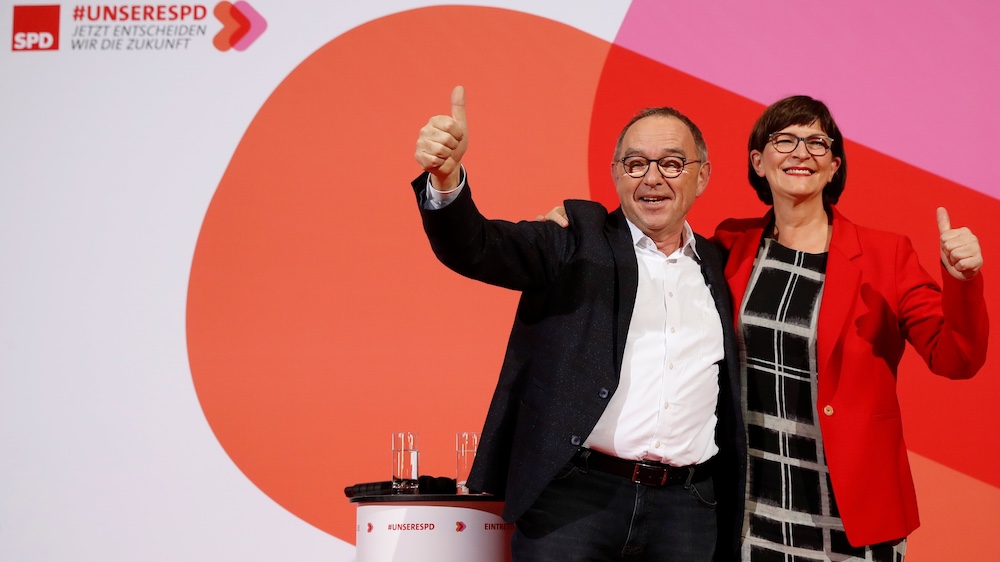 On Saturday morning, Chancellor Angela Merkel published her weekly video podcast. This one was about the importance of craftmanship in Germany, and how much it does for the vocational training of young people. Routine, happily boring routine, established over hundreds of Saturdays since Merkel first took office in 2005.

On Saturday night, the chancellor’s routine ended abruptly. Her junior partner in government, the Social Democratic Party, announced the result of its leadership vote: and—in a very unpleasant surprise for Merkel and arguably bad news for the SPD itself—the anti-establishment, anti-grand coalition faction won. As a result, the chancellor’s Saturday video messages may soon be history.

Instead of choosing Finance Minister and Vice Chancellor Olaf Scholz, a well-known and moderate politician who was strongly in favor of staying in government, SPD members voted for two virtual unknowns: Saskia Esken, a Bundestag backbencher, and Norbert Walter-Borjans, a former finance minister of the federal state of North Rhine-Westphalia. These two got the vote because they promised to take the SPD out of the Merkel coalition unless government policy changed dramatically to the left.

„I don’t believe that the grand coalition is the right constellation in the long run,” Walter-Borjans explained in a television interview. “But we’re in there, and that’s the basis on which we have to say what needs to be done. And if there is a blockade mentality on the side of the coalition partner, then the decision has to be taken that this cannot continue.”

Esken, 58, has been a member of the Bundestag since 2013, specializing in digital policy. Yet she has never held office in government or a top position in the party before. Walter-Borjans, 67, has no parliamentary experience, though he was finance minister in Germany’s most populous state for seven years, between 2010 and 2017. While he made a name for himself fighting tax fraud, he also gained a reputation as a reckless spender. Walter-Borjans ran deficits that were so high that the state’s constitutional court judged his budgets to be unconstitutional several times in a row.

Most of the party leadership as well as the SPD group in the Bundestag had been backing Scholz, so the winning duo may find it difficult to gain support in Berlin. Esken and Walter-Borjans are also hampered by the narrow margin by which they won the contest: of the 425,000 SPD members, only 55 percent took part in the run-off. Of those who did vote, 53 percent opted for Esken and Walter-Borjans. Scholz and his running mate Klara Geywitz won 45 percent of the vote.

Political observers think it was a kind of Brexit vote, motivated by an anti-establishment sentiment against what many SPD members see as a distant and unresponsive party elite in Berlin. Similar to the Brexit referendum, the margin for the winning side is small, which is likely to weaken the new leaders’ legitimacy and deepen divisions within the SPD even further.

It’s a disappointing result for all those who had hoped that holding grassroots elections would help unite and renew Germany’s oldest political party—a party that has seen its election results decline ever more rapidly since the early 2000s.

According to the most recent Forsa poll (taken before the leadership count was announced), the SPD stands at 14 percent of the vote, far less than Merkel’s conservatives (27 percent) or the Greens (22 percent). It is only just ahead of the far-right Alternative für Deutschland (13 percent).

Walter-Borjans and Esken campaigned on a leftist agenda, calling for a huge boost in investment, more radical measures against climate change, and more generous subsidies for low pensions. They also want to introduce a wealth tax and raise the minimum wage to €12 per hour, a whopping 25-percent increase.

Many details remain open. The SPD will hold its annual party congress from December 6 to 8 to officially confirm Esken and Walter-Borjans in office. The two new leaders have announced that they will seek a vote about their agenda for the coalition. And while delegates are unlikely to back every measure that their two new leaders have proposed, some will certainly pass, leading to a massive conflict within Germany’s governing coalition.

Merkel’s conservatives, who are caught in a leadership struggle of their own, made it clear that they have no intention of giving in to any new demands from the SPD. Annegret Kramp-Karrenbauer, the embattled head of the Christian Democratic Union, pointed to the coalition agreement the SPD signed two years ago. “For the CDU, that’s the basis of the deal,” she said. “On this basis, we are willing to enact policy for Germany.”

A possible scenario is a truce over a Christmas and a blow-up early in the new year. If the SPD ministers walk out, Merkel could choose to continue with a minority government, a first in post-war German history—or call new elections.

A minority government would be unstable and unlikely to last to the end of the regular term in 2022, but it would provide Germany and Europe with an experienced leader—Angela Merkel—during the country’s EU presidency in the second half of 2020. More likely, however, are new elections, which could take place in March at the earliest. As the polls stand now, the result could be a coalition between conservatives and Greens, another first at the national level.

But Angela Merkel won’t be chancellor of that government.