Home Eye on Europe A Welcome Victory for Moderate Forces

With the center-left PSOE emerging as the big winners, Spain’s election also suggests a rejection of radicalism on both sides of the Catalan independence debate. 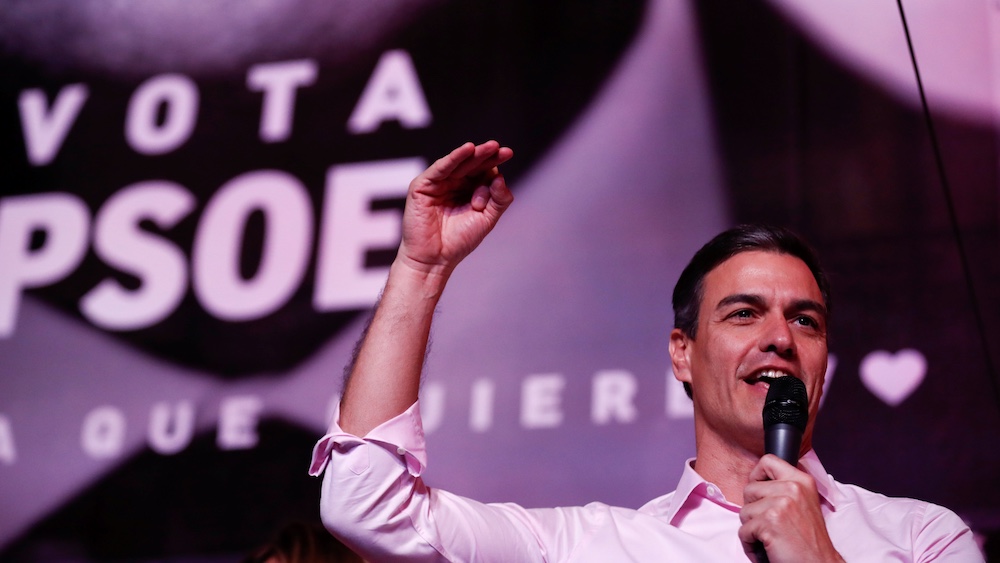 Spain’s general election has redrawn the country’s political landscape, restoring the center-left Socialist Workers’ Party (PSOE) as the country’s primary force. And although it has given the far right a foothold in parliament, the result suggests a rejection by Spaniards of the radicalism that the country’s Catalan crisis has generated.

Prime Minister Pedro Sánchez’s PSOE made substantial gains from their previous 85 seats to score a clear victory on April 28, although with 123 seats in the 350-seat Congress it fell well short of a majority.

The collapse of their long-time rival, the conservative Popular Party (PP), underlined the Socialists’ win. The PP lost more than half of its seats and is now only just ahead of the center-right Ciudadanos party, which made gains.

To the left of the Socialists, the Unidas Podemos coalition suffered losses, although it hopes to play a key role in the formation of a new government.

The newest force in parliament is Vox, a radical right-wing party which has further polarized an already divided political arena. The fact that it won 24 seats means that for the first time in the democratic era, a far-right party has parliamentary representation.

This result marks Sánchez’s first election victory in three attempts and completes a remarkable turnaround for the 47-year-old. His relationship with his own party has at times been strained and after leading it to record defeats in the 2015 and 2016 general elections he was eventually removed as leader. Yet the following year, he defied the PSOE old guard to run in the party primary and reclaim the leadership. Last May, he launched a parliamentary no-confidence motion against the then-prime minister, Mariano Rajoy, whose PP was beset by corruption scandals. On winning the motion, Sánchez became Spanish leader, leading a fragile minority government for 10 months before calling this election.

The gains he made on April 28 mean that he now has a political credibility that many critics, casting him as a lightweight, believed he lacked. The result also offers him a stronger foundation on which to build a new administration.

However, that will not be easy. The Socialists’ most natural ally is Podemos, which appears willing to enter a coalition, although Sánchez would prefer a less formal confidence-and-supply arrangement. To govern they would still need more support, which could come from smaller regional parties and, more controversially, Basque and Catalan nationalists. However, Spain’s investiture system means that such support could include abstentions.

Another possible alliance, offering a less complicated majority, would be between the PSOE and Ciudadanos. However, relations are poor between the two parties and Ciudadanos has already ruled out helping Sánchez govern.

Inter-party talks are unlikely to get under way in earnest until after May 26, the date of European, regional and municipal elections. Even then they could be lengthy, a reflection of the new Spanish political landscape which in recent years has seen the dominance of the PSOE and the PP challenged by the arrival of Podemos, Ciudadanos and, more recently, Vox. Spain’s two-party politics are a thing of the past and a new era of governing partnerships, coalitions—and instability—is now under way.

But with the Spanish economy growing faster than most of its European neighbors and the enthusiastically pro-EU Sánchez running on a moderate platform, his win will reassure Brussels amid the turmoil of Brexit and populism.

The Socialists’ victory is their first since 2008 and it tastes all the sweeter because of the performance of the PP, which was its worst ever. Although he has only been the PP’s leader since last summer, the future of 38-year-old Pablo Casado is now in some doubt, possibly depending somewhat on the party’s performance in the European elections in May. His decision to lead it further to the right has contributed to the recent polarization of Spanish politics and turned out to be a serious electoral miscalculation.

The PP, like Ciudadanos and Vox, have sought to place Spain’s ongoing territorial crisis at the heart of the national agenda, ensuring a constant tension with the left. The legacy of Catalonia’s failed bid for independence in 2017 continues to cast a large shadow over national politics. Several independence leaders are living in self-imposed exile abroad, while others are in prison. Twelve are currently on trial at the supreme court for charges that include violent rebellion, sedition, and misuse of public funds.

The north-eastern region’s current government, led by Quim Torra, still advocates independence although its strategy in recent months has been erratic. It and the Catalan independence movement as a whole have labelled the supreme court trial a politically motivated sham which, they say, reflects worrying deficiencies in Spanish democracy as a whole.

In such a context, it has been difficult for Sánchez to govern. Last summer, his Socialists needed the support of an array of parties, including Catalan and Basque nationalists, in order for the no-confidence motion against Rajoy to be passed. Throughout his ensuing tenure, the political right used the support of pro-independence parties for his government as ammunition against him.

Casado, for example, described Sánchez as a “villain” and “the greatest traitor of our democracy” because the prime minister had engaged in talks with the Catalan government. The PP leader accused him of making secret deals with Catalan nationalists on issues of sovereignty in exchange for their parliamentary support. No evidence of any such deal has emerged and Catalan nationalists have also attacked Sánchez for not going further in his discussions with them. His refusal to discuss the holding of a Scotland-style binding independence referendum ultimately caused Catalan parties to withdraw their support for his government in February, triggering the election.

Although Ciudadanos, which performed well, has also taken a tough line against Sánchez over Catalonia, the rejection by voters of the PP’s particularly belligerent stance is telling.

In Catalonia itself a similar picture emerged. For the first time, the Catalan Republican Left (ERC) won an election in the region. Although it has a long pro-independence history and its leader Oriol Junqueras is one of those currently on trial, ERC has restrained its rhetoric in recent months, still advocating secession but on the back of dialogue with Spain rather than unilateral action. Such moderation contrasts with the stance of the Together for Catalonia (JxCat) party led by former Catalan president Carles Puigdemont, who is living in Belgium. After the election he warned that “independence shouldn’t rely on Madrid,” but his party’s poor result shows that many Catalan nationalists disagree.

On the unionist side, there was also a swing towards moderation in Catalonia. The tough-talking anti-independence stance of the right fell flat, with the Socialists making gains.

And yet, despite the surge in support for the progressive policies of Sánchez’s PSOE and the shift away from radicalism in Catalonia, this election saw the arrival of a far-right party in parliament for the first time since the democratic transition four decades ago.

Gender, not Europe, as Fault Line

Vox’s 24 seats represent a modest haul, at only 10 percent of the vote—less than the vote share that far-right parties enjoy in countries such as France, Germany, Sweden, or Austria. But the result is still significant, reflecting an appetite among a small minority of Spaniards for policies that combine some elements of European populism with other more uniquely Spanish ingredients.

Vox has called for a clampdown on immigration, while offering conservative social policies that include restricting abortion, rolling back gay marriage legislation, reintroducing military service and lifting restrictions on the possession of firearms. In particular, it has had a big impact on the gender debate, countering a cross-party national consensus on measures to fight violence against women, claiming they were part of a wave of radical feminism sweeping the country.

But unlike its counterparts, such as France’s Rassemblement National and Germany’s Alternative für Deutschland (AfD), Vox rarely broaches the issue of Europe. Since joining the EU in 1986, Spain has been one of the bloc’s keenest members, benefiting enormously from both the financing and the democratic cachet afforded by membership. As a result, euroskepticism is virtually absent from Spanish politics.

Instead, Vox has used the Catalan crisis to drive its support, presenting itself as the most uncompromising of all the unionist parties on the issue. As one of the plaintiffs in the supreme court trial of independence leaders, Vox has maintained a high profile on this question and its proposals—which include introducing direct rule in Catalonia indefinitely and recentralizing the Spanish state—has dragged the parties on the right towards it. In March, President’s Trump’s former advisor Steve Bannon was quoted as saying admiringly of Vox that it was “clear proof, more than any other party, of how you can go from having zero influence to playing an important role in a country.”

A left-leaning, Sánchez-led government is likely to form eventually and Vox’s presence in the Spanish parliament may be small but it will now have an institutional platform from which to deliver its radical message.