Trumpeting China as Germany’s and Europe’s most important trading partner is misleading; US-EU commercial relations are much deeper. Ensuring that transatlantic flows are sustained in the COVID-19 crisis is one of the most important things that can be done right now to mitigate the pandemic’s economic impact. 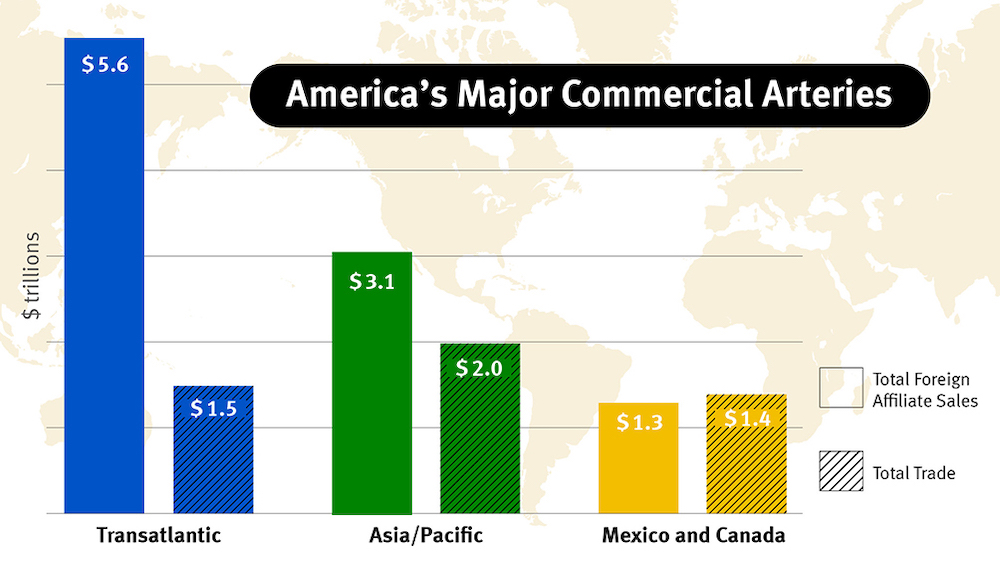 The novel coronavirus COVID-19 is currently wreaking havoc on the world economy. Disrupted supply chains are forcing companies to throttle back production. As China was the epicenter of the crisis, headlines thus far have focused on how German and European companies have had to adjust because they are so reliant on deliveries or component production in China.

These stories seem to have reinforced a fairly widespread—yet false—view that China has become Europe’s top commercial partner. Spending time in Germany this year I have been struck by repeated assertions by German government representatives that this is so. Those making such statements usually point to sizable bilateral trade in goods.

There is no doubt that commercial ties with China have become more significant for Germany and Europe. But that does not mean that China is the country most important to the health of the German or European economies.

Reducing complex commercial ties to one metric—trade in goods—ignores the commercial importance of investment links, services, digital connections, innovation ties, and foreign sources of “on-shored” jobs for the European economies. On each of these other metrics, the ties that bind Germany and Europe to the United States are much thicker and far deeper than those with China.

These additional arteries are literally the lifeblood of the transatlantic economy. If COVID-19 chills these connections, the ripple effects on the German and European economies are likely to be far worse than what we have seen thus far from China. On the other hand, if the United States and its European partners are able to avoid additional commercial tensions and actually sustain their deep commercial bonds during this crisis, the overall impact of a COVID-19-induced recession is likely to be much lower.

Half Right, All Wrong

Keying in on this single metric, on March 6 Germany’s statistics office, the Statistisches Bundesamt, issued a bald statement that “China was Germany’s largest trading partner in 2019 for the fourth year running.” I have heard many government and industry representatives parrot the same line. Strangely, the professional number-counters only count trade in goods. They omit trade in services—the fastest growing segment of the global economy. In short, Germany’s official statisticians get it only half right, and therefore all wrong. Apparently, one of the best kept secrets in Berlin is how German and European firms actually operate.

The Trade Flows You Can’t See

In short, if you put trade in goods and services together, then it is clear that the largest trading partner for Germany and the EU overall is actually the United States. And it has been thus for decades.

And this is just the beginning of the story. Most German and European companies actually prefer to deliver services via their investment ties rather than through exports. Allianz of America provides insurance, DHL Holdings offers courier services, and SAP Americas delivers software services across the United States. Volkswagen, Daimler, and BMW all supplement their US-based manufacturing operations with a range of customer services. In 2018, sales of services by European companies based in the US amounted to $585 billion, more than double European services exports to the US in the same year. Similarly, sales of services by US companies based in Europe of $882 billion were 2.5 times larger than US services exports to Europe. And all of this dwarf the sales that American and European companies are able to make in China, due in part to the many restrictions the Chinese impose on Western companies.

Why Export When You Can Invest?

These numbers highlight an additional reality: trade itself is a misleading benchmark of international commerce. The real backbone of Germany’s international economic standing is investment, not trade. And here again, America is the preferred destination. The US accounted for 62 percent of Europe’s non-European assets around the world in 2018. The total European stock in the US of $3.0 trillion was four times the level of comparable investment from Asia. Germany’s total FDI stock in the US totaled $324 billion in 2018, and German investment flows to the US grew 54 percent in the first three quarters of 2019. China plays a marginal role in comparison.

Europe’s role vis-à-vis the United States is very similar. Europe accounted for about 60 percent ($18 trillion) of total US global assets in 2018. This is more than four times the amount of comparable US investment in the entire Asia-Pacific region. Moreover, Europe’s share of total US FDI is going up, not down—57.5 percent over the past decade. And when US FDI flows to Caribbean offshore financial centers are subtracted from the total, Europe’s share climbs even higher, to almost two-thirds of US direct investment flows.

An inordinate fixation on trade ignores the reality that most German and European companies prefer to deliver goods and services by investing in other countries in order to be close to their customers, rather than sending items across the ocean. Sales by European companies based in the US in 2018, for instance, were more than triple European exports to the United States. Sales by US companies based in Europe, in turn, were roughly one quarter larger than the comparable US sales throughout the entire Asian region. Ford, GE, Amazon, IBM, Hewlett-Packard, 3M, Caterpillar, Goodyear, Honeywell—American companies have a long-established presence in Germany and other European countries, and their sales reflect that. Sales by US companies in Germany alone were over two-thirds larger than combined US sales in Africa and the Middle East.

So, despite the headlines about US-European trade wars, American and European companies also earn their money on each side of the Atlantic, not in China. In 2019, US affiliate income in Europe rose to a record $295 billion and European affiliate income earned in the United States in 2019 was also at a record $140 billion. Over half of the income US companies earn abroad comes from Europe. That is roughly three times more than what US companies earn in all of Asia.

All of these facts run counter to the fashionable narrative that US and European companies prefer China or other low-cost nations to developed markets. The reality is different, for several reasons.

First, investing in Europe or the United States is relatively easy, while investing in China remains difficult because of onerous restrictions on foreign ownership and forced technology transfer rules. Second, growth prospects in China have slowed not only because of the coronavirus but because Beijing has shifted toward more consumption- and service-led growth and away from export- and investment-driven growth. Third, in addition to being two huge markets, the US and Europe are wealthy, which is correlated with highly skilled labor, rising per capita incomes, innovation, and world class R&D infrastructure, among other things. Together the US and Europe account for half of global consumption, and gaining access to wealthy consumers is among the primary reasons why US and European firms invest in each other’s markets.

Deep and thickening transatlantic investment ties contrast starkly with FDI coming to each continent from China. For some years Chinese FDI in both the US and Europe soared from a relatively low base. However, Chinese investment is now plummeting on both continents due to bilateral commercial tensions and tighter US and European scrutiny of such investments. Chinese investment flows to the US declined to approximately $4.5 billion last year, and Chinese FDI in Europe fell by 40 percent to $13.4 billion. Looking at the paucity of deals in the pipeline even before the coronavirus crisis struck in such dramatic fashion, it appears 2020 will be a year of weak Chinese investment in both North America and Europe.

An inordinate focus on trade in goods is deeply misleading. The health of the German economy and Europe’s international competitiveness is not just dependent on this one particular segment of commerce, but on the many other ways Germany and its European partners are bound to others around the world. A fuller understanding of these forces makes it clear that, despite much talk of de-globalization and de-coupling and siren calls of “America First” or “Europe First,” the United States and Europe remain deeply intertwined and embedded in each other’s markets, and that their respective links with each other—not China—remain the driver of the global economy. To argue otherwise is to miss the forest for the trees.

COVID-19’s hit to European-Chinese commercial connections was simply the first phase of this cascading crisis. A shutdown of transatlantic commercial ties, which are much deeper and wider, would be far more devastating. Now is not the time to exacerbate transatlantic commercial tensions. On the contrary. Ensuring that transatlantic flows of goods, services, and investment are sustained is one of the most important things that can be done right now to mitigate the economic impact of the pandemic.

N.B. This article is based on the author’s and Joseph P. Quinlan’s publication The Transatlantic Economy 2020, which will be released on March 26, 2020.