Shortly after the fall of the Berlin Wall our contributor Bettina Vestring spent two years reporting from the East German city of Dresden. She recalls the sights, the smells, the revelations about Stasi informers, and the neo-Nazis. 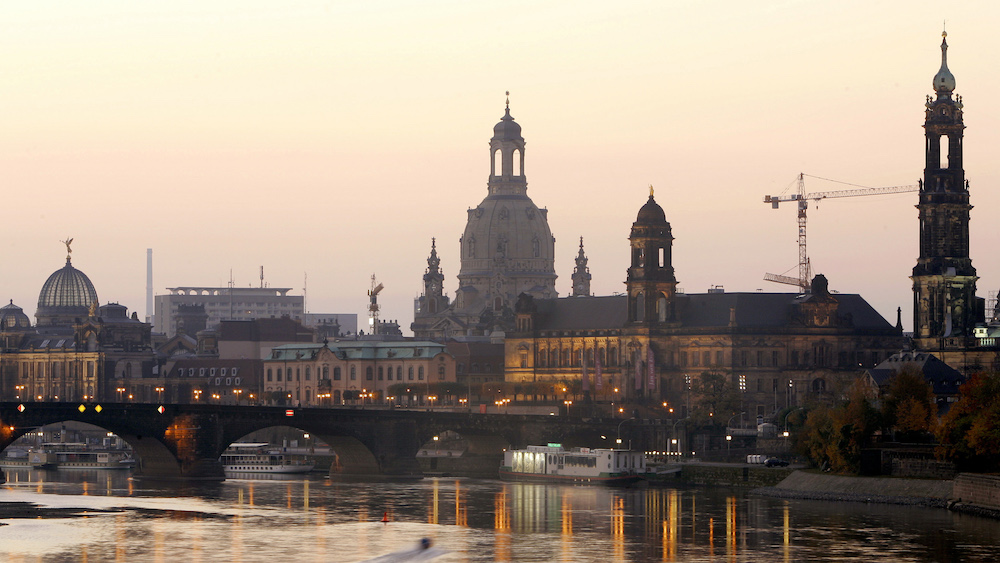 When, just months after Germany’s reunification, I arrived in Dresden as a young reporter I suddenly landed in a very different world. A far darker one: the streetlights were dim and few and far between. Shop windows were tiny and dark at night. To find a rare restaurant, you had to know where you were going.

Buildings, unpainted for decades, were a uniform dark grey, their plaster crumbling. Balconies were often barred for fear they might collapse. Smells were different, too, with the sharp aroma of the lignite coal used for heating or the thick scent of the oil burnt in the Trabant two-stroke engines.

Factories were woefully outdated, roads narrow and bumpy, offices stuffy and overheated. I learnt that whoever had a home phone had probably been close to the communist power structures of the German Democratic Republic. Anybody else just dropped in or left notes on the door.

Dresden in 1991 was very different from the cities I already knew in West Germany or elsewhere in Western Europe. But it was also a world apart from East Berlin where after the fall of the Wall the pace of change had been much quicker. I spent nearly two years in Dresden—a time that profoundly shaped me and my views on recent German history.

Influx from the West

It was a heady time. We were part of history happening all around us, and we had the conviction that the world was taking a turn for the better. But even then, not everything was rosy. Many of today’s difficulties have their origins in the post-Wende era. (Wende, meaning turn-around, is the word most Germans use for the peaceful revolution of 1989.)

The biggest issue, I believe, has been the dearth of East German leadership.

In Dresden in the early 1990s, I was one of very few Western reporters who came to live in the city. It was different for public administration and business. Most top positions were soon filled with West Germans from Bavaria or Baden-Wuerttemberg who came to live and work in East Germany for a stint. Many of them were good people, and without them, unification—bringing the West German rule of law with all its sophisticated bureaucratic details to the East—could not have happened so quickly.

Initially, most Dresdners whom I talked to approved. They did not want to deal with yesterday’s communist officials, the representatives of a state they had just gotten rid of, when applying for a building permit or unemployment money. They had more trust in people from the West. Soon enough, however, sentiment turned, and the West Germans were increasingly seen as colonizers imposing their system on East Germans.

At the same time, as the files of the German Democratic Republic were opened, more and more information trickled out about the enormous number of East Germans—nearly 200,000 out of a population of 16.4 million in 1989—who had been secret informers for the Stasi, the infamous East German secret police.

A shocking number of the younger East Germans I met in Dresden—smart, ambitious people, charismatic, with leadership qualities and energy to spare—were revealed to have been informers. Spying on their relatives, friends, neighbors, colleagues, listening in to conversations, writing down damaging titbits of information about people close to them. Not a crime as such, but rightly considered to disqualify anybody from holding an important office, be it public or private.

And so, one by one, many of young leaders disappeared from the scene—here an energetic deputy in the Saxony state assembly, there a representative of Dresden’s chamber of commerce or a capable civil servant in one of the ministries. That the Stasi had contaminated and spoilt so many of the best, brightest people in East Germany was a tragedy, enormously painful for everybody involved and with very far-reaching consequences.

Few of those informers, incidentally, were blackmailed or pressured by the Stasi into signing up. Many were attracted by the promise of being able to make a difference, of change being possible, if only people in power knew what was really happening. Flattery and material rewards were added bonuses.

One thing I learned from my Dresden friends, however: Do not gloss over the ugly truth of what informing means. If you—as a West German who were lucky enough not to grow up in such a corruptive system—think that anybody might have been sucked in, think again. You are belittling the courage and honesty of those who dared turn down the Stasi’s invitation to become one of theirs.

The erosion of the East German elites continues to this day. Not through Stasi poison, that’s long over. But for nearly 30 years now, a large share of the most talented young people from the East have moved to western Germany or beyond for more opportunities and a better life. It’s estimated that nearly 5 million East Germans have left since 1990; partly replaced by 3 million people who moved from West to East.

Vacuum Filled by the AfD

The most painful blow to those staying behind is the fact that a particularly high share of well-educated young women left. This means that many eastern German regions have been drained of initiative, optimism and leadership—and that too many young men have had to remain single. The East-West migration left a vacuum that is now being successfully exploited by the rightwing populist Alternative für Deutschland (AfD). Ironically, many of its leaders are West German in origin.

Yet it didn’t take the AfD to introduce racism, xenophobia, and Nazi ideas to East Germany. In the post-Wende Dresden, even Poles and Czechs from just across the border were regarded with suspicion and dislike. The Vietnamese guest workers who had come to the German Democratic Republic on a state contract were kept isolated in their barracks and deeply despised.

I vividly remember one day in 1991 when I was doing an interview at the headquarters of the Dresden police. As we were talking, we heard shouts of “Heil Hitler!” I went to the window and watched. A group of skinheads were marching across the courtyard doing the Nazi salute while police officers looked on and did nothing.

Those officers weren’t neo-Nazi sympathizers. They were caught in transition from one set of government to an entirely different one, unfamiliar with the new rules they were supposed to apply, and completely overwhelmed by the situation. A few years earlier, neo-Nazis would have been manhandled into prison; a few years later, they would have been facing criminal proceedings. Just then, however, they were allowed to walk about in triumph.

This vacuum helped neo-Nazis spread their ideas, as did boredom and the growing fear of losing out, of having been left behind. In September of 1991, I covered the riots in the small eastern city of Hoyerswerda, the first massive attack on foreigners. For days, neo-Nazi skinheads threw stones and firebombs at a hostel for Vietnamese workers. When those workers were eventually evacuated, the neo-Nazis switched their attacks to a refugee home a few streets away.

I will always remember Hoyerswerda, not just because the police were unwilling and unable to stop the riots. The most bizarre aspect was the attitude of the local crowd that had come to watch the attacks. It was like a festival: people took photos, applauded and commented. There were a lot of old people, but parents had also brought their small kids, some of them sitting on their fathers’ shoulders in order to have a better view.

What a break from small-town boredom—and what a disastrous signal to the right-wing groups then forming. Over the next several years, those riots were followed by attacks on foreigners all over Germany, but particularly in the East. Often enough, West German Nazis helped with money and expertise, but the biggest factor for being able to establish lasting structures was the weakness of the police and the judiciary.

Today, the streets of Dresden are well-lit and filled with modern, shiny cars. In many towns around Saxony and beyond, the old centers have been beautifully restored. Industry is thin on the ground, but where it does exist, it is modern and competitive. The road signs for “Industrie-Nebel” (industrial fog) that warned drivers about the deep yellow smog in the coal-mining region south of Leipzig have disappeared for good.

No doubt, some, or even many, aspects of unification could have been handled better—with hindsight and without the frantic pace forced by events at the time.  Nearly 30 years on, two of the biggest problems that became so clearly visible after the Wende still shape East Germany’s landscape: the lack of a dynamic, indigenous leadership, and the spread of an illiberal, racist ideology. Both are related, I strongly believe, and it will take the rebuilding of local elites to create a better future for the whole of Germany.

Still we need to be aware that not everything that happened in the 30 years since the Wende is negative, despite the problems German unification brought to the region. Overall, in terms of democracy, personal freedom, prosperity, health, rule of law, or even environmental protection, it continues to be a fantastic success.