Home Eye on Europe The Specter of Boris

Boris Johnson is all but certain to become next British Prime Minister. Paradoxically, he may be the best candidate to avert a no-deal Brexit. 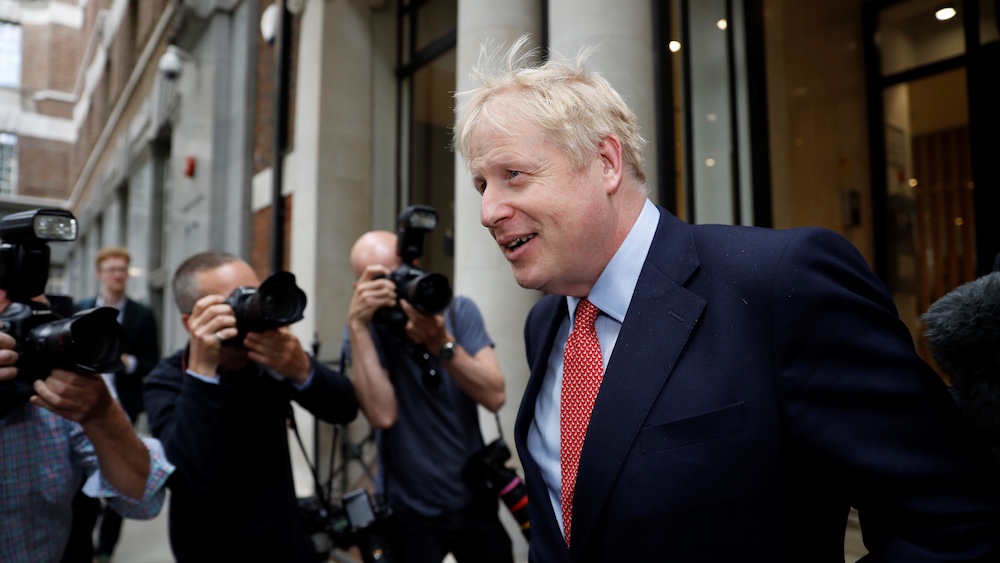 A clear majority of Conservative Members of Parliament wants Boris Johnson to take the helm and navigate the country out of the Brexit mess. 160 out of 313 voted for him in the final round of the leadership elections last week, compared to 77 for Foreign Secretary Jeremy Hunt and 75 for Environment Secretary Michael Gove (amidst allegations of tactical voting from Johnson supporters to eliminate Gove, who was considered a greater threat).

It is now up to the approximately 160,000 Tory members to choose the next British Prime Minister from the last two men standing. Johnson and Hunt will present their pitches to the party faithful in hustings across the country, with voting closing on 21 July and the next Prime Minister to be announced shortly thereafter.

Due to his popularity with the party’s base, most of whom are hard line Brexiteers, Johnson is the clear front-runner, although his campaign has already hit a road bump: on June 21 the police were called to Johnson’s girlfriend’s flat after neighbors reported that the couple had had a loud altercation. The details are still unclear, but he will likely have to answer difficult questions sooner or later.

The Face of Leave

Johnson was the face of the infamous Leave campaign in the run-up to the Brexit vote, and to Remainers he epitomized all that was wrong about Brexit, with his propensity for xenophobic remarks and imperial nostalgia; his outright lies, like the claim that leaving the EU would boost the British coffers by £350 million a week; and his gross misrepresenting of the EU—he once compared it to the Third Reich (Hunt, incidentally, has compared the EU to the Soviet Union). President of the European Council Donald Tusk’s comment that a “special place of hell” was reserved for “those who promoted Brexit without even a sketch of a plan of how to carry it out safely” was a thinly veiled attack on Johnson.

But in the aftermath of the vote, his star rapidly descended. At the eleventh hour of the previous leadership contest in 2016, Johnson’s running mate  Gove back-stabbed him, citing a lack of character and leadership quality. Once promoted to Foreign Secretary in 2016 in Theresa May’s cabinet, Johnson stood out for his amateurism, unpreparedness, and gaffes. When visiting a Buddhist temple in Myanmar, a former British colony, he started reciting a nostalgic poem from the colonial era, forcing the British ambassador to intervene. And the Brexit impasse exposed his charlatanry during the campaign.

And yet, in a reflection of the dire state of British politics at the moment, Johnson quickly emerged as the man to beat once Theresa May resigned. Built on a far more professional campaign than in 2016, his team has kept Johnson’s media appearances to a minimum to avoid gaffes. He has also managed to reach out far beyond the Brexiteers in his party to attract the support of centrists like Matt Hancock, current health secretary. Tories see Johnson as the last chance to unite the polarized party and, given his popularity among voters and track record of twice winning the mayoralty of liberal London, prevent a wipe-out at the next election.

At first glance, a Johnson premiership would be a nightmare for EU leaders, who have grown ever more frustrated with the Brexit mess and just want to move on to deal with other pressing issues like China, the Trump administration, or climate change.

During the campaign, he has sold unicorns, repeating demands to renegotiate the Northern Ireland backstop, threatening to withhold the £39 billion payment of the divorce bill (that he agreed to in cabinet), and wanting to leave the EU with or without a deal by the next deadline on Halloween. Yet the EU has made clear it is not going to budge on its red lines: the UK will have to settle its financial obligations before any negotiations about a future trading relationship and at the European Council on June 20-21, Tusk and European Commission President Jean-Claude Juncker reiterated that “the withdrawal agreement is not open for renegotiation.” And the EU leaders know that they are in the stronger bargaining position, as no-deal would be exceedingly more harmful to the United Kingdom.

Two scenarios are thus conceivable. First, Johnson fails to change the substance of the Withdrawal Agreement and seeks to leave acrimoniously without a deal. But the Westminster parliament, where there is no majority for no-deal, could be able to stop him from going down that path, necessitating fresh elections or possibly another referendum with destination unknown. In that case, the EU would probably grant another extension of the Brexit-saga beyond October 31. Irish Premier Leo Varadkar said that “an extension could only really happen if it were to facilitate something like a general election in the UK or perhaps even something like a second referendum.” Second, Johnson leaves the substance of the Withdrawal Agreement intact, but agrees with the EU to rewrite the political declaration to commit the UK to a free trade agreement rather than a customs union, in the process gaining some extra promises that the backstop will not be needed. This would also require a short extension. He could then try to push this repackaged deal through parliament.

The second option would contravene everything that Johnson has campaigned for in recent months. But who else could be so shameless to commit the mother of all U-turns? Even he knows that leaving without a deal would be calamitous for the British economy and political relations with its main partners—he has already shifted his rhetoric, arguing when asked to guarantee the exit date that leaving on October 31 is “eminently feasible”.

If anyone can persuade a Conservative Party that has descended into Brexitmania to vote for the repackaged deal (as well as the Northern Irish Democratic Unionist Party and perhaps a handful of Labour MPs), it is Johnson. Unlike Theresa May, Brexit poster-boy Johnson has sway over the rebellious Tory Brexiteers on the backbenches, most of whom would find it impossible to again vote down a deal that would deliver Brexit. He would also threaten to have no choice but to call a general election should his attempts to push through the deal fail, in which the Tories would be punished heavily by the electorate for not delivering Brexit.

Johnson getting a deal through a divided parliament would be the ultimate irony of Brexit: calling in the arsonist as a firefighter. The next months will show whether the Brexit conflagration can still be contained.