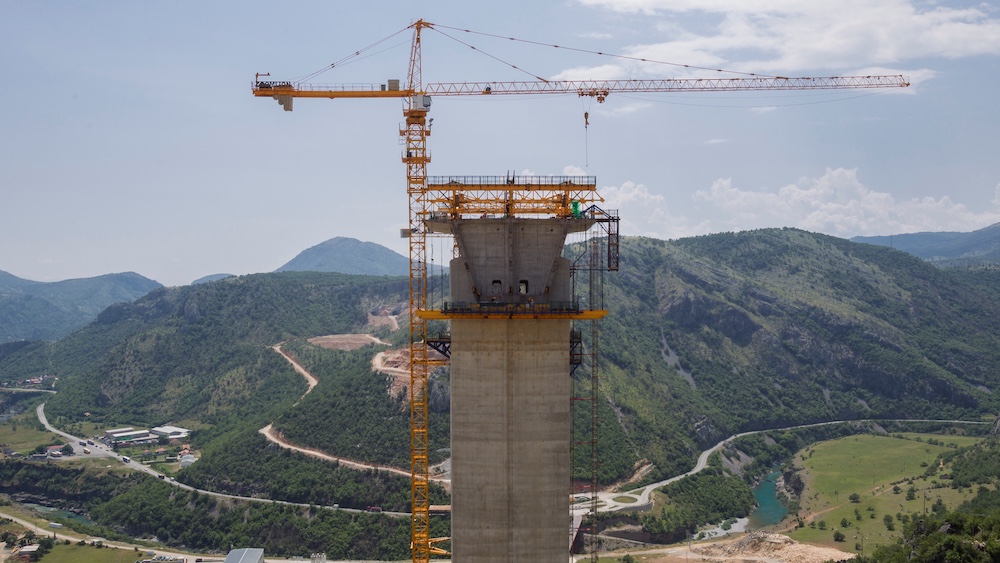 The Bar-Boljare highway in Montenegro is being built by a Chinese company and financed with Chinese debt. The project is welcomed by some, but for many here its costs are too high.

After four years as an engineer on site, Mladen has grown accustomed to the sight of mountain-defying infrastructure. I’m far less jaded; to my eyes, Moračica Bridge is clear proof that humankind—or more specifically, China Road and Bridge Corporation (CRBC)—has mastered the ability to conquer geography. Rising 200 meters above the Morača riverbed, this kilometer-long bridge is the apex of an ambitious new highway running from Smokovac, near Montenegro’s capital of Podgorica, to Matesevo in the North.

The current route North is a twisting two-lane road chiseled into the mountainside. The new 41-kilometer stretch of highway shoots right through Montenegro’s craggy scenery, its 20 bridges and 16 tunnels shortening a 180-kilometer nail-biting journey into a carefree 30-minute drive. But this impressive piece of civil engineering doesn’t come cheap, and critics of the highway claim that their small country can ill afford such a glitzy project.

The Exim Bank of China is providing 85 percent of the cash for the government’s €810 million contract with CRBC, but, taking into account currency fluctuations, interest, and additional works, Montenegro will probably end up owing China closer to €1 billion. For a country with fewer people than Frankfurt and a gross domestic product on par with the Bavarian town of Bamberg, €1 billion is enormous – roughly equivalent to €1,600 from every man, woman, and child in Montenegro.

The Smokovac-Matesevo highway is just one part of a 170-kilometer tarmac artery that the government hopes will run from the Adriatic port of Bar to Boljare, on Montenegro’s Northern border with Serbia. Provisions for the remaining four sections have not yet been arranged, but the government estimates they’ll cost another €1.7 billion.

Bridges are designed to connect people, but massive infrastructure projects like the Bar-Boljare highway often end up dividing them instead. In Montenegro, the debate around the highway is hugely polarized. Montenegro’s businessman-cum-president, Milo Djukanovic, and his Democratic Party of Socialists (DPS), have been in power for 30 years. And here if you are pro-government that means being pro-highway.

Meanwhile, watchdogs and the opposition press are uniformly critical of the project. They see it as a spectacular manifestation of government incompetence, corruption, environmental harm, criminal opacity, and resource misallocation. Debate is lively and people are relatively happy to express their opinions. The press is not stifled here, as it is in the Serbia of unpopular strongman Alexander Vucic. As one long-time watcher of Balkan politics explains, “Djukanovic doesn’t share Vucic’s obsession with being loved—he only wants to remain in power and make money.”

Kickbacks Are the Norm

There is no hard evidence of corruption in this project, but everyone here admits that corruption is endemic throughout the Western Balkans. Kickbacks vary, but in Montenegro I’m told that 10 percent of contract value is not an outrageous sum to request as a bribe. Even many CRBC employees, who speak only on the condition of anonymity, assume high-level corruption exists in the project. When I raise the issue with one worker, he gives me a pitying smile and says, “taxes and corruption are omnipresent—any construction project involves envelopes changing hands.” Even a senior manager tells me, “of course there is corruption,” afterwards assuring me that it is nonetheless “within an acceptable range.”

Under the terms of the contract with CRBC, at least 30 percent of work must go to local contractors. There are no public tenders involved in the awarding of these subcontracts, and it is highly unlikely that decision makers would miss out on such a juicy opportunity to reinforce their patronage networks.

This isn’t corruption imported from China—it is thoroughly local, and it’s worth noting that the Chinese aren’t the only ones facilitating corruption. While projects involving the big international financial institutions are probably clean, interlocutors say Western companies are often involved in shady deals. In Niksic, Montenegro’s second largest town, I meet Nenad Markovic, an old school trade union leader who seems calmly resigned to his role of intractable, hopeless opposition to the powers that be. I ask him what’s driving the project. Pausing over his coffee, he answers conclusively, “I don’t see any motivation other than getting rich.”

Of course, corruption thrives in darkness, and according to MANS, a local partner of Transparency International that has energetically campaigned against the highway, the project is veiled in secrecy. The government has declared numerous project-related data, acts, and documents as state secrets, and recent changes to the Freedom of Information Act have led to a widening of the transparency deficit in Montenegro.

The lack of public information on inspection reports is particularly worrying. The Tara river basin is a UNESCO World Heritage Site universally revered by Montenegrins, but its riverbanks are currently being used as dumping sites for excavated material, and construction is said to have affected the course of the river. Critics say the damage has been done, but the government says strict rules are enforced and that there’s a well thought out cleanup plan. One sign I spot along the river warns that violators of environmental rules will be prosecuted—the sentence is unpunctuated in the local language but carries three exclamation marks in Chinese.

The engineers I meet seem sincere in their claims that CRBC are kept under strict supervision, but again transparency is the issue—without letting NGOs and media in on the supervision process, these claims simply can’t be verified.

In fairness to the government, opposition complaints should be taken with a pinch of salt. While certain clauses of the loan agreement, for instance, are widely said to be unpublished, the Ministry of Transport happily shared the full document. It includes supposedly “secret” clauses like Article 8.1, which waives Montenegro’s sovereign property rights (apart from to military and diplomatic assets) in case of loan default, and Article 8.5, which stipulates arbitration in Beijing. In general, compared to many Belt and Road projects around the world, documentation on the Bar-Boljare highway is readily available.

Corrupt or not, transparent or not, the fundamental issue here and the crux of most disputes over infrastructure remains the question, “is this project in the national interest—is it worth it?”

From a short to mid-term commercial perspective, it’s difficult to see how the highway will pay for itself. Even the project’s supporters have largely abandoned this claim. Instead, they point to less calculable benefits. The government’s main argument is that the highway will help revitalize the impoverished North. And so, while many Podgorica residents are quick to criticize the highway, Montenegrins from the North are largely positive. I ask one young student waiting at a bus station, “Do you think the highway is worth the money?” He laughs and says, “Well, I am from the North, so yes—it is very good for us.”

The Ministry of Transport mentions “balanced development” of North and South, but they also give me 14 other justifications, from “reducing traffic pollution” to “developing tourism.” They press home one point in particular: “I think we can all agree that the value of human life is immeasurable.” Locals joke that only tourists are intimidated by the current route, but a worrying number of people do die on this stretch of road. Many people I talk to use this emotive justification: is a billion too much to pay for even one Montenegrin life?

Nobody denies that the new road will be safer, or that it will make the lives of Serbian tourists and Northerners easier—they just think that 25 percent of GDP is a high price to pay for 41 kilometers of road. One interlocutor likens the highway to a Ferrari, or a Gucci bag—great to have, but probably a misallocation of resources if you earn €300 a month, as many Montenegrins do. Fundamentally, the question of worth is a subjective one. Whether they want to make money and win votes (the highway will be completed this year, a month ahead of elections), or because they truly believe Montenegro needs one, the government is determined to own a Ferrari.

The idea of building a North-South highway has been knocking around for decades. Over the past 10 years, there have been a couple of false starts, and the project was turned down by the European Bank for Reconstruction and Development (EBRD). A number of feasibility studies paint the highway as an overly adventurous and commercially questionable undertaking, and several more modest ideas have been floated as alternatives. But the government has held out for a highway. And only the Chinese have been able to make this dream a reality.

Over an espresso in a downtown bar, the senior CRBC manager tells me emphatically, “no one apart from the Chinese could have built this highway.” He’s right—Chinese banks are lending where the EBRD and World Bank dare not tread, providing capital for unbuilt national projects across the world. The only condition is that Chinese companies get a slice of the action—this is the quintessential one-two punch of the Belt and Road package: Chinese engineering muscle fueled by Chinese debt.

For many in the Western Balkans, this paradigm is liberating. Beijing provides a source of finance free from the meddling demands and conditions that characterize finance issued by institutions like the EBRD. For those that support the project, Chinese credit is helping usher countries along the path of development. The senior manager tells me, “every day I am more and more convinced this highway is the best thing that could have happened to Montenegro.” Critics of the highway are less enthusiastic—they say Chinese credit facilitates corruption, waste, and vanity. One interlocutor—an expert on the highway who wishes to remain anonymous—reflects philosophically, “this loan has allowed us to explore our worst political instincts.”