Home On the New Silk Road Big, Empty, But Full of Promise? 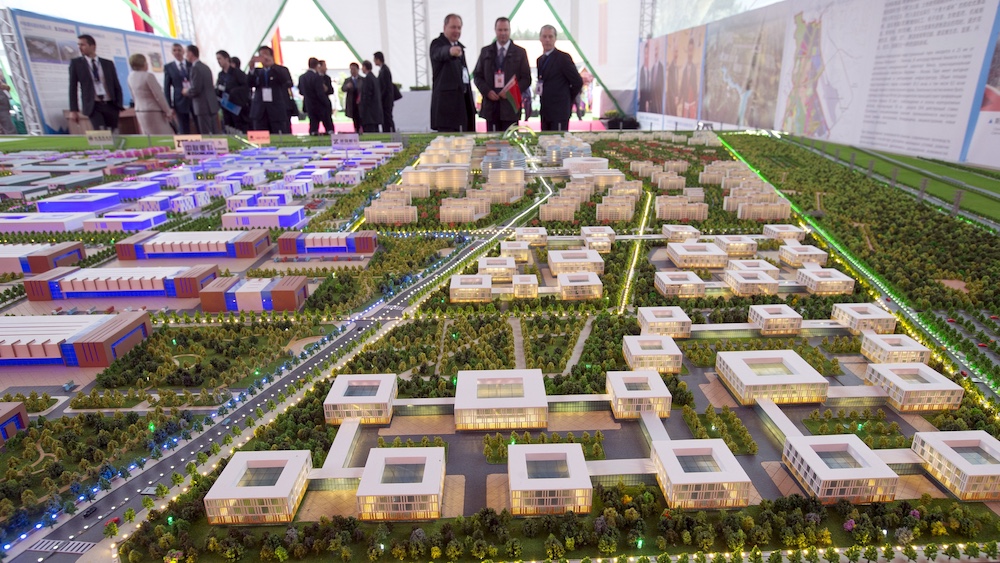 The Great Stone industrial park outside Minsk currently feels like an empty monument to political ambition, but with increased involvement from Chinese investors and Beijing’s backing it still has potential.

Flags branded with the China Merchants Group logo flutter along wide, empty roads as we make our way from the administrative headquarters towards Great Stone industrial park’s new trade and exhibition center. The center has a floorspace of 22,000 square meters, and is populated by a security guard who watches over an exhibit detailing the park’s most noteworthy resident companies. As we tour the exhibit, the park’s press secretary explains that the center will host an international economic forum later that year. Prompted perhaps by the cavernous exhibition space, she adds, “we’re just at the beginning of our journey here.”

Some commentators look at Great Stone, located just outside of Minsk and otherwise known as the China Belarus Industrial Park, and they see a bold idea struggling to convince investors. They talk about the personal interests of Belarus’ strongman leader, President Alexander Lukashenko, and describe a project that is more about ambition and politics than serious economic opportunity. The expensive-looking exhibition center certainly has a whiff of boondoggle about it, but, as with many projects undertaken by China, “big and empty,” always holds the uncertain promise of becoming “big and full.” During my visit to Great Stone, I asked employees whether the park was underachieving. The typical response was measured, yet believably candid: “It’s not as fast as we want, but, for such a huge process, it’s progressing at a good speed.” It doesn’t make for captivating headlines, but development is often slow—success a relative concept.

Great Stone has been around as an idea for almost a decade. The park’s “journey” began circa 2010, when officials from Belarus became inspired by a visit to the China-Singapore industrial park in Suzhou. The stated purpose of Great Stone is to, as head of park administration Alexander Yaroshenko puts it, “concentrate industry in one convenient location, with priority given to biotech, electronics, new materials, etc.” During our interview, Yaroshenko is full of praise for Belarus’ good business environment (37th in the world) and “unique geography” between the two markets of the Russia-led Eurasian Economic Union (EEU) in the East, and the European Union (EU) in the West. Well rehearsed but with an edge of excitement to his voice, he tells me about the park’s potential as a testing ground for new Belarusian projects and brands.

A Smart Plan on Paper

The MAZ-Weichai partnership is something of a poster child for this type of exciting new venture. In its heyday, MAZ supplied most of the Soviet Union’s heavy trucks and had a complete monopoly on certain models. MAZ is still a major state-owned manufacturer and a visible brand in Eastern Europe, but they rely on German engines for their automobiles. The new joint venture with Weichai, a Chinese diesel engine manufacturer, might not seriously change that dynamic, but it does mean that MAZ can fulfill its strategic objective of producing an indigenous engine— 10,000 of them a year by 2022, according to Yaroshenko.

On paper, the plan looks like a smart one. As Belarus’ flagging state-owned enterprises become less viable sources of employment, the country will need new ventures like the MAZ-Weichai partnership to occupy future generations of workers. But reality rarely lives up to the ambitious plans of politicians, even ones as powerful as Lukashenko, whose personal advocacy of the project has been essential. The joint-stock entity behind Great Stone, Industrial Park Development Company, was signed into existence in 2012, but construction didn’t start until 2015, and nothing seriously kicked off at Great Stone until 2017.

According to Olga Kulai, a Minsk-based analyst with first-hand experience of working with Chinese companies, the park initially faltered due to a lack of Chinese commercial interest in the project, which simply wasn’t “investment ready” at the time. The company that led the charge, Sinomach subsidiary China CAMC Engineering (CAMCE), also lacked experience in developing investment parks, and it wasn’t until China Merchants Group was brought into the equation that the park’s prospects changed direction. The park also slashed its capital requirements, providing easier access to incredibly generous tax and legal incentives attached to residency.

Kulai is clear about why China Merchants made the move to Great Stone: “It was a political decision.” Belarus is incredibly proud of its close relationship with China—a country that provides Lukashenko with an attractive strong-state-strong-economy model as well as a powerful friend that isn’t Russia. By virtue of the discrepancies in size Beijing pays less attention to Minsk, yet the two countries’ “comprehensive strategic partnership” still means something to China. At least $110 million from China Development Bank and $170 from the Exim bank of China has been made available for the building of Great Stone, and the joint-stock company is 68 percent Chinese owned, with Sinomach taking 32 percent and China Merchants Group 20 percent. Having been blessed by a visit from President Xi Jinping himself and declared “a flagship project” of the Belt and Road Initiative (BRI), Great Stone is of clear political value.

And so development of the park continues. It does so at a “good,” “reasonable,” or “not great” pace, depending on who you ask, but it continues nonetheless. In justifying the time it has taken for the park to get off the ground, the management points out that Great Stone is “a unique project” for Belarus, requiring a whole gamut of new regulations and business practices.

When I visited Great Stone, I saw several large construction sites, swarming with hard-hatted workers. One of these sites was an R&D center being built with a Chinese grant and by China 15th Metallurgical Construction Company. All of the workers were Chinese, and the park employees were happy to acknowledge that the majority of projects at the park are built by Chinese construction workers. I got the sense that this was an accepted condition of Chinese sponsored development—rather a facility built with Chinese labor than no facility at all.

Most of the 43 park residents are Chinese and Belarusian companies with very little online presence. None of those contacted have responded so far to questions about their involvement in Great Stone, including the handful that are touted as international investors, and so it is difficult to gauge their quality and level of commitment to the park. These residents have so far “invested” $1.1 billion in the park. Although Great Stone doesn’t have its hands on much of the money yet, the park assures me that this figure refers to contractual agreements rather than pledges or letters of intent. Ten companies have already begun operating, and more are scheduled to do so in the near future. One of the park’s more obscure international investors—an Israeli solar panel company called RecomBel—is due to finish construction and begin operations later this year. If it does so, it will join the other 10 companies in providing jobs that may not have existed were it not for the BRI and the international cooperation it is supposed to encompass.

There are challenges ahead for Great Stone. Alexander Filippov, another Belarusian analyst, tells me that there is a question mark over export options for companies based in Great Stone. Although it has been listed as an EEU special economic zone, the bloc’s country of origin requirements may still create legal difficulties with exports to the EEU, while faltering negotiations with the EU also provide uncertainty for West-bound exports.

Then there is the question of the financing for further developments. At the end of my tour I was shown round a 1:500 scale model of the park. Complete with high-speed rail line and residential facilities, the model is a highly optimistic version of what the park was supposed to look like in 2020. Asked how the park intended to finance the high speed rail, the press secretary referenced several international financial institutions. The Belarusian government itself is cash-strapped, exercising what Filippov calls “loan management finances.” The head of the European Bank of Reconstruction and Development (EBRD) in Belarus, Alex Pivovarsky, told me that financing the rail link was not out of the question, and in general spoke favourably about the park’s progress, but financing from institutions like the EBRD takes time, and they rarely finance projects in their entirety.

That leaves the option of further Chinese money. Chinese investors and bank managers are not blind to profits—they are first and foremost business people—but they are also susceptible to political pressure. Great Stone possesses symbolic value as a project supported by Xi, and it’s unlikely that Beijing would ever let Great Stone flounder. The park has been slow to prove itself, but Great Stone’s “journey” has just begun and it has a powerful guarantor on the road ahead.