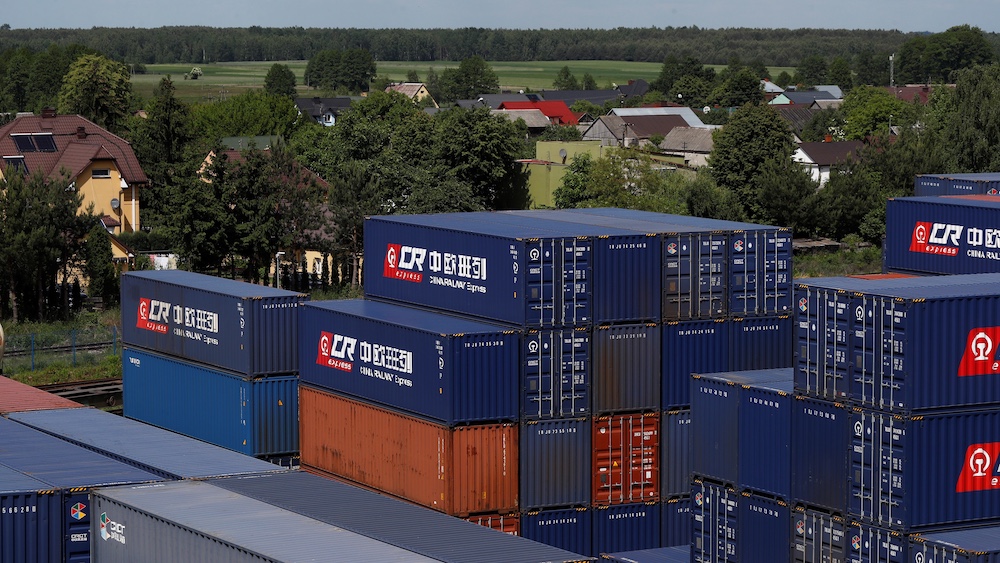 Subsidies are boosting rail freight along the New Silk Road, but it’s too soon to say if this expensive investment will pay off in the long run.

When the famous and much vaunted Yiwu-London freight train arrived in Barking, East London, fresh from its maiden voyage across the Eurasian continent, the implication was that the train itself had traveled all the way from China. In fact, the wagons had come from Duisburg, and before that, the containers had made an important stop at a small border village in Eastern Poland.

On my journey East and before crossing the Belarus border, I stopped in this village, Małaszewicze, where I was shown around the local dry port facilities by Krzysztof Szarkowski, an accommodating intermodal manager at DHL Freight. The larger part of EU-China rail freight traffic passes through Małaszewicze, where containers must be transferred between the Soviet-standard 1,520 millimeter gauge tracks and the slightly narrower gauge used throughout most of Europe. This is done by hulking cranes that hover over parallel tracks and pluck containers from one track before setting them down onto adjacent wagons.

There are four intermodal terminals at Małaszewicze, capable of processing 984 containers a day. In recent years, this infrastructure has had to cope with a marked rise in traffic as the number of freight trains traveling between Europe and China has boomed. Since then, the story of the “Europe-China Express” has quickly become one of the more celebrated tales told about the New Silk Road, and the Chinese news agency, Xinhua, still excitedly announces each new rail service between China and Europe.

That is largely because the Europe-China rail connection works so well as a metonym for the wider Belt and Road Initiative (BRI). Rail captures the East-West connective essence of the New Silk Road and trains function as an easily recognizable symbol of cross-continental commerce. Rail cars take the place of camels, Sogdian silk merchants become logistics managers, and China’s President Xi Jinping’s mythology of the “Silk Road Spirit” finds convenient historical continuity. But rail freight between China and Europe is representative of the larger Belt and Road in more ways than one: both are ultimately fueled by Chinese public money—the BRI in the form of government-issued loans and rail in the form of subsidies.

In fact, subsidies for the Europe-China connection come from a mixed bag of sources along the route, largely from Chinese cities, and provincial and central governments. They also vary from train to train and are not particularly transparent. Still, most industry experts use words like “substantial,” “significant,” or “huge” to describe them, with some calculating that subsidies cover up to 60 percent of the costs. This issue is frequently picked up by critics who use the subsidies’ existence to argue that “new” rail freight routes to Europe serve a largely propagandistic function and show the relative irrelevance of EU-China rail freight. One think tank even suggested that the subsidies might be considered an “advertising budget” for the BRI.

With “China Railway Express” literally described as a brand by Chinese state development plans, there is little doubt that the subsidies are justified from a political point of view—by local governments competing to host the largest number of routes, and by Beijing, keen to boast about trade along the New Silk Road.

But European governments are not simple co-conspirators in Chinese propaganda—they too have their own agenda. For example, when Yiwu Timex Industrial Investments Co extended their Chongqing-Duisburg route to London for a demonstration service in 2017, it was a British trade minister who boldly exclaimed: “This new rail link with China is another boost for global Britain, following the ancient Silk Road trade route to carry British products around the world.”

Part of the “Go West” Strategy

I was told a similar story in Lodz—a post-industrial city in the heart of Poland that has remodeled itself as a regional logistics hub. According to Tomasz Kaminski, an academic focused on relations with China, cooperation on rail freight with the Chinese city of Chengdu required a “political umbrella” to get it off the ground. Following the collapse of its lifeblood textile industry in the 1990s, Lodz was in desperate need of rebranding. The then Marshal of the Lodzkie region, Witold Stępień, saw cooperation with Chengdu as the perfect opportunity to transform the image of the city and region and played an active part in pushing the partnership. As elsewhere on the New Silk Road, Chinese money helps fuel local political ambitions.

The Lodz-Chengdu example also illustrates the solidly functional core of EU-China rail freight. The logic of a freight train from Yiwu, on China’s eastern seaboard, to an island nation in the North Atlantic is dubious, but Chengdu to Lodz makes sense. Before the BRI was even announced, a Polish logistics company called Hatrans had founded a joint-venture in China with a view to connecting Dell, in Lodz, with its supplier, Foxconn, in western China. Or, as Hatrans told me matter-of-factly, it was “driven by the need to satisfy customers who required fast transportation between Central China and Central Europe for the fraction of the cost of air freight.” Ronald Kleijwegt, mastermind of an even earlier route between Chongqing and Duisburg, tells me that the entire Europe-China rail freight phenomenon was essentially a product of China’s “Go West” strategy—Beijing’s plan to develop poor interior provinces that had missed out on the East’s manufacturing boom.

In the short term, subsidies might look like a BRI advertising budget, but throwing money at infrastructure first and waiting for development—the “build it and they will come” approach—is a defining characteristic of Beijing’s thinking on the BRI. In the mid-term, fast freight at subsidized prices helps raise awareness of rail as a viable option for customers. In the long term, subsidized trains might just help facilitate the development of inland Chinese provinces and continental dry ports—a central goal of the BRI.

Also, like many BRI projects, empty trains and the subsidies that enable them have the secondary function of incubating Chinese companies and making them globally competitive. David Smrkorvsky, head of rail at JUSDA (the supply chain management service platform of Foxconn), tells me that several Chinese logistics companies have become highly competitive in Europe due to subsidized trade. He also comments that not a few European companies are “doing unbelievably well for themselves” out of the same subsidies.

The key question is whether EU-China rail freight has a life beyond subsidies. Ronald Kleijwegt tells me that even the Chinese government realizes that one cannot build a long-term structural solution on subsidies. Indeed, the government is ostensibly in the process of phasing them out. David Smrkorvsky of JUSDA is dubious that market costs have been reduced enough to compensate, but Kleijwegt thinks it can be done by further improving the balance of trade between East and West and by forcing through further efficiencies.

The long-term viability of continued growth for the rails is uncertain, and critics are right to question the commercial rationale behind the growth in traffic, but they are wrong to put a purely propagandistic value on the phenomenon. Like the BRI as a whole, Europe-China rail freight was driven by a purely economic logic that was doubled down on by Chinese government spending and political will. Whether this expensive strategy will be successful in driving future development cannot be ruled out, but neither is it guaranteed.