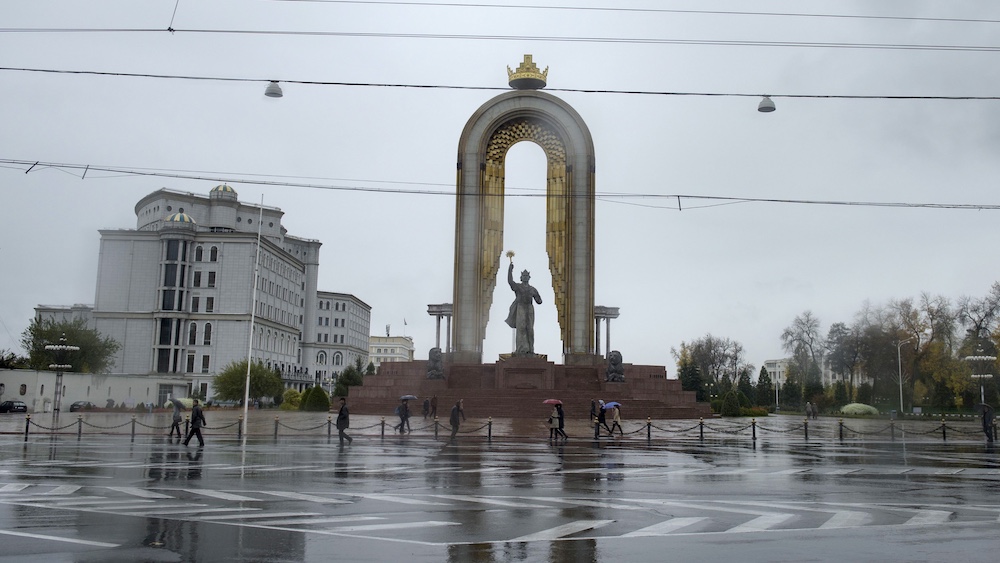 Some Tajikistani businessmen estimate that only 5 percent of the Chinese money ends up in the hands of the Tajikistani people. But that hasn’t reduced their appetite to work together.

I could be anywhere on the planet. The marble, glass, and expensive looking vertical lines of the Hyatt Regency give nothing away. In fact, I’m in Tajikistan—a poor, mountainous Central Asian republic that is remembered in the West for its bloody civil war and long, opium-stained border with Afghanistan. These negative associations tend to deter European and American investors, but as I’m finding out, they do little to stem the flow of capital from China.

I’m in the Hyatt to meet a Tajikistani lawyer who works as a fixer for Chinese companies, but there’s been some confusion. The fixer thought he’d be meeting a representative from China Road and Bridge Corporation, not some nosy British researcher. After I finish my introduction, the fixer asks, “and why should I risk talking to you? Are you going to pay for my information?” There’s a smile on his face, but I don’t get the impression that he’s joking. Tajikistan, coming in 179th on Freedom House’s “Freedom in the World” rankings, is not the sort of country where questions are encouraged, and China—Tajikistan’s largest creditor and economic partner—is an especially sensitive topic.

Perhaps suspecting that I’m actually an undercover investor, the fixer eventually launches into his sales pitch: “There’s a lot of money to be made here you know – cotton, gold, silver mining, all you need is a good lawyer – someone with know-how.” He’s not wrong. Tajikistan is so much more than its border with Afghanistan—it’s a beautiful country with kind, indomitable people and a deeply rich culture. Despite the poverty of its citizens, it’s also materially rich—mostly in mineral resources, but also in unlocked economic potential. China realizes this, and where other creditors and investors fear to tread, the Chinese are present in full force.

“We Have the Money”

After the fixer leaves, I start a conversation with two Chinese women at a nearby table. They’re in the construction business, and their understanding of Tajikistani-Chinese dynamics is simple: “They need development, they need help, but they have no money. We have the money.” Introducing herself using her English name, Alice tells me that she’s from Shanghai. She speaks fluent English, but she’s smilingly tolerant of my sloppy Chinese. “Why Tajikistan?” I ask. “Because there are so many opportunities here. It’s just so crowded in China. In London too – not everyone can invest. Here there are plenty of investment opportunities. The people are friendly, and there is no war anymore.”

The Belt and Road is a state-led campaign that provides relief to the massively overheated infrastructure market in China, but the “going out” of Chinese companies and individuals is also an organic process driven by cut-throat competition at home. Tajikistan ranks 129th out of 191 countries on the World Bank’s “Doing Business” index. It’s a cliché that the Chinese are less risk averse than European actors, but it’s an observation that holds true in Tajikistan.

Fahrad works at a big Chinese-Tajikistani joint venture that produces cement. We meet at his offices in a dusty suburb of Dushanbe, where he elaborates on the differences between Chinese and European companies. “The Chinese don’t care about risks,” Fahrad tells me, “they don’t listen to World Bank ratings, they just do and then see the results. The Europeans analyze and wait, but by then maybe it’s too late. If Europe cares only about risks, they’ll lose the market here.” He pauses, and adds – “the reality is, they already have.”

Fahrad and his colleague Arash, who’s in accounting, have worked for both European and Chinese bosses. Returning from his lunch break to find me in his office, Arash is initially frosty, but eventually warms up to his role as informant: “Another big difference is the way Chinese and Europeans work. I used to work for a French company. When it came to paying overdue taxes, I said I could make the problem go away by paying a ‘fine’ to the right person, but my boss preferred to just pay the correct taxes. The Chinese – they don’t care about reputation.” I ask whether his new Chinese boss pays the “fine,” and Arash just laughs.

As well as being risk-friendly, it’s also a justified cliché that Chinese companies are more corrupt, more willing to play by “local rules” than Europeans. Of course, European business people are no more virtuous than their Chinese counterparts – they are simply better bound by anti-corruption laws at home, and by a cleaner corporate culture. When Western critics lambast China’s Belt and Road Initiative, the word “corruption” is always part of their vocabulary. It is undeniable that BRI money fuels corruption in countries like Tajikistan, but such moralizing arguments sound better in Washington or Brussels than they do on the ground in countries that desperately need capital.

Corruption is as pervasive as oxygen in Tajikistan. Everyone—from elites paying for construction contracts to high school students paying for good exam results—is accustomed to bribery. Life and business are also all about who you know. Everything here is owned by Emomali Rahmon, Tajikistan’s president-for-life, and his nearest and dearest. As in other Central Asian countries, wealth that should be in the hands of the people is concentrated at the very top. A Tajikistani friend who was part of the old guard—a Soviet nostalgist—describes this system as “neo-feudalism.”

Every Foreigner Needs a Local

Another Tajikistani “fixer” explains, “As a foreigner you need a ‘roof’ to work here—a local who can protect you.” As well as bribery, Chinese companies seem au fait with managing informal networks.  Fahrad tells me, “They work with local people, they know how to work – they make the product and we deal with the government, like working with two hands.” Fahrad and Arash cite this as another difference between European and Chinese companies: “The Europeans don’t use the knowledge of locals, they say, ‘we know Central Asia,’ but they don’t and then they go bankrupt. The Chinese always work with partners—there’s always a Tajik manager next to the Chinese.”

Tajikistan’s neo-feudalist system means that most Chinese money coming into the country ends up in the pockets of Rahmon and his extended circle. The Chinese-built and -funded highway managed by the enigmatic, British Virgin Islands registered company “Innovative Road Solutions,” is one infamous example of short-sighted rent-seeking, but the list of suspect deals is long. In Dushanbe, I stay with the Tajikistani director of an important Chinese-owned company. They are deeply resentful of the government, and are desperate to leave Tajikistan. “I don’t know what has happened to my country,” is a frequent refrain during our time together. One day I ask them, “of the money China is pouring into Tajikistan, how much do you think ends up in the hands of the people?” They answer—“probably only 5 percent.”

But according to Fahrad and Arash, you’ve just got to accept the conditions of doing business here if you want to operate. Both men say they’d prefer to work with European companies, but, Fahrad expands, “we waited a long time for Europe and Russia… they just didn’t see our potential.” Fahrad echoes the simple equation laid out by the Chinese businesswomen in the Hyatt: “We needed money and knowledge – the Chinese have both, they just needed a market.” He continues, “business is very good right now. They invested, made a successful business, and created jobs. Within five years we’ve paid back the loan we took out.”

Like almost everyone I meet in Tajikistan, Fahrad is absurdly friendly. After our interview, he insists on showing me his home—a courtyard house magically secluded from the bustle of Dushanbe. I meet his parents and leave carrying heaps of home-grown grapes and oriental pears. As he drives me back to the centre of town, Fahrad explains, “We’ve seen the horrors of war here. As long as there’s economic development, I just don’t care, I don’t mind the corruption.” The specter of war and chaos is often wheeled out by the President to bolster support, but it’s a motif that finds a receptive audience in an emotionally scarred population with habitually low expectations. After giving me the 5 percent quote, the director laments, “it would be better if our country had clever people to control investments, but we don’t… here there are just stupid people.” In Tajikistan, there is a sense that, corrupt or not, China is the only country trying to meet the country’s huge need for infrastructure and investment. “Overall,” the director says, “Chinese money is good for Tajikistan.”

One sunny afternoon in late September, I drive down to the South of Tajikistan with the director to visit the construction site of a Chinese textiles factory. The sky is still summer-blue and the Chinese-built road is strewn with the white-fluff of early-harvest cotton. I spot a colossal flagpole flying the red, white, and green flag of Tajikistan, and remark banally on the size of the flag. “Yes,” the director says with a bitter laugh, “we have a lot of flags here in Tajikistan. No education or healthcare, but lots of big flags.” At the construction site itself, the director tells me to pretend I’m a cousin from Russia. I say that I’ve felt no animosity as a Brit in China, but they warn me, “if you speak English, they won’t trust you, they love Russians a lot better.”

We wait outside the factory with a motley collection of senior Chinese and Tajik employees. Once the work day finishes, we’ll head into town to sort out a “tax problem” on behalf of the Chinese company. As the sun slips below the mountains, workers lay down their tools and stream out of the gates. The Chinese get on buses heading back to their nearby work camp—an austere industrial village made from shipping containers and concrete— while the local workers head into town. Most workers it seems, are local, but not as many as the official quota mandates. Over the gates, a red and yellow banner reads in Chinese “Let the Chinese and Tajik people share together in the Belt and Road, let them share together in its achievements.”