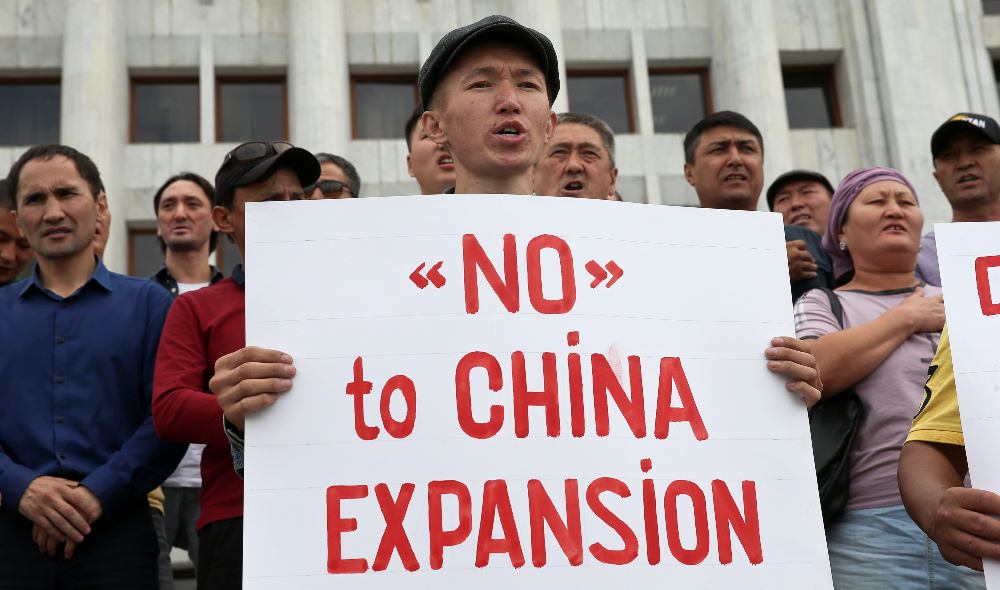 Governments like to talk up the cooperation between China and Central Asian states. But the Sinophobia in Kyrgystan and Kazahkstan is very real.

“They eat people, you know. They eat dogs, insect—-even babies.” There’s an uncomfortable silence in the car, as I consider how best to push back against my Kazakh taxi driver’s casual racism. He’s talking about the Chinese, and he’s responding to a simple question that I like to slip into all of my conversations in Central Asia: “So, what do you think about China?”

In the end, I cowardly opt for a non-confrontational tone of disbelief. “Really? I don’t think that’s true…”

China is the most important economic actor in Central Asia, and so for countries in the region, good relations with Beijing are a priority. But in Kyrgyzstan and Kazakhstan especially, Sinophobia is rampant, and negative public opinion of China undermines the line spun by officials and state media that the Chinese are welcome. Animosity is less severe in Uzbekistan, which doesn’t share a border with China, while in Tajikistan, authoritarianism and a taboo against speaking ill of China make it difficult to assess public opinion. In general, though, Beijing has a long way to go in winning hearts and minds in Central Asia, despite ostensibly rosy governmental relations.

The Poetry of Mistrust

Sinophobia in Central Asia is well established. The empire to the East is a traditional enemy of the nomadic Turkic tribes, and following the Sino-Soviet split, propaganda in the USSR purposefully reinforced Sinophobic tendencies in the region. In Kyrgyzstan, this inheritance still colors the debate on China. At special occasions, Kyrgyzstanis still recite an epic poem about the exploits of the legendary Kyrgyz hero Manas, whose chief foe was the Chinese.

I hear a snippet of this epic at a Saturday night feast in Bishkek. I’m in the company of a couple dozen players of Kok Boru—a popular Kyrgyz sport that is a little like rugby, were rugby to be played on horseback with a goat carcass instead of a ball. Patriotic feeling is running high, and after we’ve finished eating, the “Manas-teller”—a respected patriarch with an air of mysticism about him—bursts into hypnotic chant-like song. In this case, the story he tells is of a daring exploit to infiltrate an enemy Chinese camp.

Later in the evening, I find the opportunity to ask the Manas-teller about Kyrgyzstan’s contemporary relationship with China.

“We receive a lot of credit from China,” he tells me. “We need to be very careful about paying this back.”

“China is more dangerous than Russia,” he warns. “We have experience with Russia, and the process of Russification is slower than what China are capable of.”

Although China has risen to regional economic supremacy in the decades following Soviet collapse, the political and cultural presence of Russia is much more keenly felt throughout Central Asia. Even those who are wary of Russian influence will often begrudgingly choose Moscow over Beijing.

“I don’t want to be with Russia either,” the Manas teller continues. “But we are small, if not Russia, we would easily be captured. The United States is too far away. It would be good to get closer to the European Union, but China and Russia are just too near.”

In Kazakhstan, people occasionally tell me that they feel squeezed between two great empires. In most cases, they prefer the devil they know. A huge number of migrants from Central Asia work in Russia. Their experiences with racism in Moscow don’t always leave them with a sense of post-Soviet solidarity, but the fact is that remittances make up a third of official GDP in Tajikistan and Kyrgyzstan. Many people have family in Russia, and after over a hundred years of Tsarist or Soviet rule, the Russian language is still widely spoken. Russian media is dominant, and worldviews are closely aligned with Moscow, especially among the older generations. The border with China on the other hand, often feels as if it represents an insurmountable gulf of cultural difference.

“One and a Half Billion Chinese”

Russians and Central Asians also share a fear of China’s demographic superiority. The prospects of Chinese migrants leasing land and marrying local women have sparked protests in Kazakhstan. There is a visceral fear that the “one and a half billion Chinese” are set to trickle in over the border, taking jobs, buying land, and diluting local populations until the region becomes a de facto province of China.

These fears are not baseless, but they are rooted more in conspiracy and legend than fact. Dig a little deeper, and it often emerges that Sinophobia in Central Asia is locked in an ugly, racist fear of the Other. An alarming number of respondents dislike China simply because the Chinese are “dirty,” or because they are rumored to have peculiar diets.

A fewer number point to much more rational sources of mistrust. The cultural difference between the Turkic peoples of Central Asia and Han China is indeed vast, and Chinese companies, as well as the Chinese government often appear unwilling or unable to bridge this divide. Even more than other “expats,” Chinese communities find integration a challenge, and it is incredibly rare to find a Chinese businessperson in Central Asia who speaks Russian or the local language. Anecdotally, Chinese companies find communication with local communities difficult. One local officer at a European embassy in Bishkek tells me, “a lot of investors don’t work with local people, but the Chinese are worse—they don’t speak at all. The Canadians do a bit, the Russians do most of the time, but the Chinese just turn up without saying anything and start building.”

Chinese operations also have a reputation for poor environmental practices and low standards. It is difficult to generalize and companies obviously vary, but most respondents in Central Asia still have a much higher level of trust in non-Chinese internationals. While the standards of Chinese companies and products are improving dramatically on a global scale, poor countries like Tajikistan and Kyrgyzstan are usually last to see the best of what China can offer. It is also true that Chinese operations sometimes flout local regulations to employ higher ratios of Chinese workers. While these companies are also creating local employment opportunities, the optics reinforce the idea that the Chinese are stealing jobs.

One line of reasoning in regional Sinophobia stands out in particular. Beijing has long had a reputation as an opponent of Islam, but the more recently extreme programs of forced assimilation in Xinjiang have entrenched wariness of China among the Turkic, Muslim populations of Central Asia. China’s critics in Europe and America often overestimate pan-Turkic sentiment and Muslim solidarity. From Berlin, Kazakhs and Uyghurs may sound and look the same, but there are massive inter-ethnic tensions in the region. At the same time, it is hard for Central Asians to ignore Beijing’s attitude toward the minorities it has dominion over. Hearts may not bleed as heavily as Europeans and Americans might expect for the plight of China’s Uyghurs, but Beijing’s oppressive policies in Xinjiang provide a perfectly logical reason for locals to fear Chinese Communist Party influence.

China is having more success at rolling back Sinophobia among younger generations in Central Asia. Beijing’s soft power efforts are often ridiculed by those monitoring clumsy, saccharine Xinhua propaganda, but China is also spending vast resources on training and language programs in the region. The efforts are very much still in their infancy, but Gallup polls from 2018 suggest that young people today think of Beijing slightly more favorably than their counterparts in 2006. In Bishkek, the first student I speak to on the street turns out to have spent a year in Beijing. “Life is better in China,” she tells me in well-spoken Chinese. “The wages and the quality of education are better.” Gira knows about the oppression in Xinjiang, and she says her mother doesn’t want her to return to China for fear of how she’ll be treated as a Kyrgyz. But although Gira is critical of the Chinese government’s policies in Xinjiang, she thinks the situation in Beijing is different, and she is largely positive about China’s influence. Another Chinese language student I meet in Bishkek tells me in flawless English and an American accent—“I have studied in the US, but now I want to learn Chinese because I know China is the future.”

What with the still-strong gravitational pull of Russia, such deeply ingrained apprehensions about China, and the example Beijing sets with its sinister policies in Xinjiang, it is still difficult to imagine a Chinese future for Central Asia. Increasing numbers of young Central Asians are falling into Beijing’s orbit, but China’s economic importance races ahead of its popularity in the region. The reality of Chinese strength mean Central Asian governments have to play nice with Beijing, but negative public opinion presents endless potential challenges to China’s interests.