Most media attention in Europe has focused on the response to the coronavirus in Hungary, where Viktor Orbán has pushed through a controversial law that empowered him to rule by decree, as the DGAP’s András Rácz detailed. The power grab in Budapest overshadowed a parallel political drama in Warsaw regarding the presidential elections on May 10, which is now moving into a crucial phase. 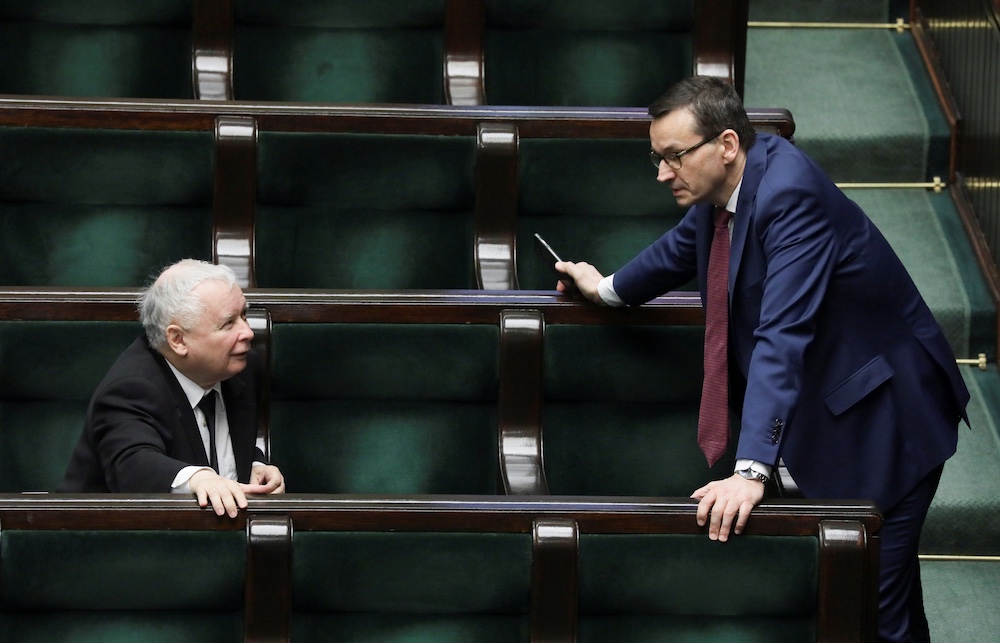 Poland’s de facto leader Jarosław Kaczyński and Viktor Orbán share the same goal. They both aim to use the coronavirus crisis to strengthen their power. But in Poland, unlike in Hungary, the right-wing Law and Justice (PiS) government is doing everything it can to prevent the declaration of a state of emergency.

According to the Polish constitution, declaring a state of emergency would require the postponement of the presidential elections scheduled for May 10. This delay would be a political setback for the sitting PiS government, which believes that incumbent President Andrzej Duda is the clear favorite, especially now that campaigning has been suspended due to the coronavirus crisis. The government thus has an incentive to hold the election amid a pandemic and a lockdown.

As a result, Poland is slipping more and more into a state of a blunt power struggle. On the one hand, the government is introducing more and more stringent restrictions to fight the pandemic, including a ban on entering forests, beaches, and parks. The fact that soldiers, in addition to the regular domestic security forces, are monitoring compliance with these regulations adds to the sense of seriousness.

At the same time, PiS representatives have long argued that nothing stands in the way of holding elections in early May—with over 30 million registered voters—in the usual way. They even threatened that local authorities who refuse to organize the elections due to health risks will be removed from office and replaced by commissioners.

After the government’s own health minister raised questions about the public health consequences of holding the election as planned, the government came up with the idea of bypassing current laws, by changing the Electoral Code and allowing postal voting only for all citizens, without even opening any ballot stations. Although the Constitutional Court has ruled that it is forbidden to amend the electoral law less than six months before the election, the government appears determined to go ahead. To make sure, the head of the post office has been replaced by a trusted deputy defense minister.

Forcing a shift to a postal vote would not only deepen the permanent political turmoil in which Poland has found itself since PiS returned to power in 2015, but there is also the sense of an acute crisis of legitimacy. Surveys indicate that almost 80 percent of Poles support postponing the elections, and only about a quarter of them believe that postal voting is a good idea. While this reluctance does not seem to worry Poland’s government, who typically seem to follow Kaczyński’s orders, it would certainly make it harder to build national solidarity in the face of a crisis.

Meanwhile, Kaczyński and his acolytes have been trying to remove further obstacles to the postal elections. A war raging within the governing coalition, between Kaczynski and the leader of one of two PiS’s small coalition partners Porozumienie (“Agreement”), Jarosław Gowin, who didn’t want to bow to Kaczynski’s will, ended up humiliated.

Gowin proposed a compromise solution, an amendment to the constitution that would extend Duda’s term by two years, with no possibility of re-election. But Gowin did not find support for his proposal in the ranks of the opposition, whose votes are necessary for constitutional changes. Failing then to convince Kaczyński to postpone the election, he resigned as deputy prime minister, but announced that his party will not leave the government replacing him with his party colleague, Development Minister Jadwiga Emilewicz.

When it seemed that sidelining Gowin brought the ruling camp closer to its desired goal, a notion to bring the bill to the parliament’s floor was surprisingly rejected at first by the Sejm on Monday; by the evening, however, there was a majority for switching to a postal vote. It’s not plain sailing, though. The Senate, where the opposition holds a marginal majority, also needs to approve the measure. Although the Sejm can reject its veto, the Senate has now 30 days to discuss with the bill. This means that after the final adoption of the law there would only be a few days left to organize the elections. They may then be moved, possibly to May 17, as the new law grants the Speaker of the Sejm, who takes her orders directly from Kaczyński, the right to change the election day.

Should the presidential elections go ahead in May, there are serious doubts they would be considered fair and fully free. But for the time being, the EU, which has reacted to various breaches of the rule of law in Poland in the past, has taken a backseat, as it has in Hungary. Last week, a European Commission spokesman noted that “it is for member states to decide whether to postpone planned elections in the current context,” as long as such decision is consistent with the member states’ constitutional obligations.

However, steps taken so far by the EU to halt the Polish government’s anti-democratic tendencies, including triggering the Article 7 procedure, have had little impact on Poland. And anti-EU sentiments continue to be strongly expressed by the government and its acolytes. Public television—which serves the government as a propaganda mouthpiece—, journalists with links to the ruling party, and PiS MPs have all accused the European Union of showing a lack of solidarity and of interfering in Poland’s domestic affairs. This time, this anti-European choir was also joined by Prime Minister Mateusz Morawiecki, considered a moderate and relatively pro-European, who claimed that “the European Union did not give a single cent for the fight against the coronavirus.”

Can the Law and Justice party make its tactic work? And if yes, will it drag Poland further away from the European Union? It may soon turn out that the anti-European rhetoric and putting politics ahead of the fight against the epidemic and its economic consequences backfires. All the more so, because the government’s economic “’anti-crisis shield’ is quite modest when compared with other European countries. It accounts for about 10 percent of Poland’s GDP, while other leaders have put packages of up to 20 percent of their respective countries’ GDP on the table.

What is more important, however, is the fact that as many as three quarters of Poles expect that the experience of the pandemic will result in closer cooperation between EU member states. If the EU succeeds in rebuilding trust by preparing ambitious and effective aid programs, this feeling could be further reinforced. And Poles, whose euro-enthusiasm is widespread, although often superficial, might quickly come to the conclusion that isolation the PiS way is not splendid, but miserable.

NB. This article was updated on April 7 to include the vote taken by the Sejm.