Home Eye on Europe Show Me the Money

As national leaders debate the next long-term EU budget, climate and defense are proving the two most contentious issues. 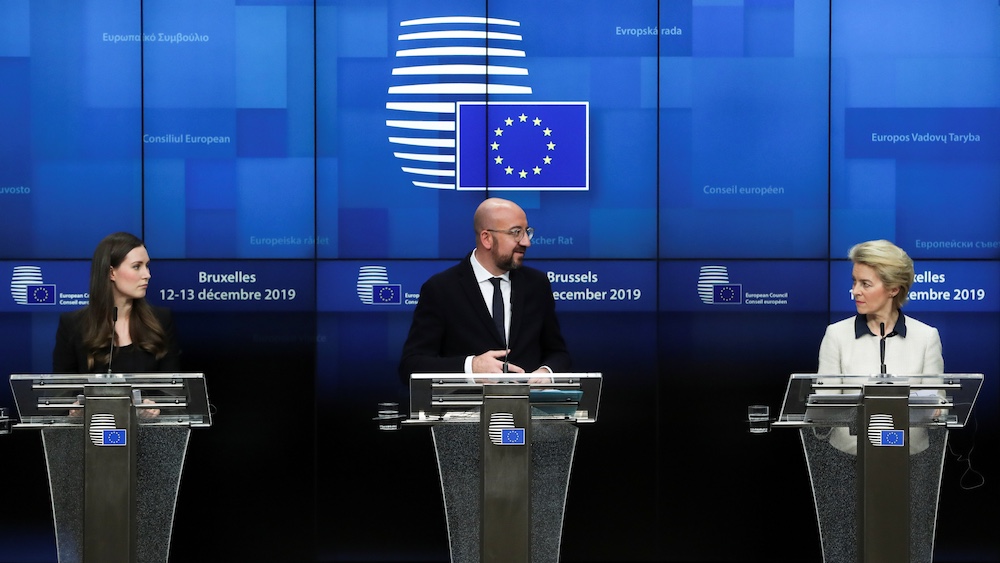 European Council summits in Brussels can often be filled with rancor, never more so than when they involve money. This week’s EU summit in Brussels was a case in point.

EU national leaders held only a brief discussion about the multiannual financial framework (MFF), the EU’s seven-year budget due to start in 2021. Predictably, a new proposal to drastically cut the Commission’s proposed budget from Finland, which currently holds the rotating EU presidency, was welcomed by Northern countries and condemned by the South and East. But it was the proxy battles fought over climate and defense funding that were most interesting to watch.

Western European members have spent six months trying to convince the Eastern members to support a target of completely decarbonizing the European Union by 2050. It finally looked like everyone would get on board at the summit after new EU Commission President Ursula von der Leyen offered a €100 billion “just transition” fund to ease the way for countries reliant on coal.

Indeed, at the last moment, after intense negotiations, Hungary dropped its opposition last night. Czechia fell in line too after other member-states agreed that the summit text could make reference to nuclear power. That left only Poland. It was thought that Prime Minister Mateusz Morawiecki would take negotiations late into the night, in order to get as much money as possible, and relent in the end. That’s because this was the last possible moment he could effectively wield his veto.

Von der Leyen has said she will propose binding legislation in March to set the 2050 target, whether or not there was unanimous political approval from all 28 (soon 27) EU member states. While the Commission prefers to get unanimous consent from the Council before proposing big items of legislation, it is not legally necessary. Once the legislative proposal is made, it only needs a qualified majority of member states to vote for it in order to become law. Poland can no longer veto.

“In Our Own Pace”

As he left the summit, Morawiecki said he had secured an “exemption” to the target. “The conclusions give us enormous flexibility,” he said, saying that Poland will not have to abide by the target but will still get “a very significant part” of the just transition fund. “We’ll reach it in our own pace,” he said. “We will be able to conduct the transformation in a way that’s safe and economically beneficial for Poland.”

However Poland will not be exempt from the 2050 legislation once it’s adopted. It will apply to all member states equally. This veto was largely symbolic, and all it has accomplished is angering the other EU member states and the commission, who are now not at all minded to be generous with Poland when it comes to the just transition fund.

Morawiecki’s grandstanding was certainly meant for domestic political consumption in Poland, where his Law and Justice party (PiS) likes to be seen as standing up against the EU and its supposedly burdensome climate legislation that would hold back Polish economic growth. But in fact he has probably just vetoed his way out of just transition funding.

French President Emmanuel Macron made the funding threat explicit in his closing press conference. He described Poland’s lack of participation as “temporary.” “If Poland was not to confirm its participation, it would step outside the European mechanisms also in terms of solidarity financial mechanisms,” he said, implicitly threatening to withhold not just the just transition funds, but also standard solidarity funds.

Leaders were also meeting in the shadow of a contentious NATO summit last week in London, where US President Donald Trump lashed out at French President Emmanuel Macron for calling NATO “brain-dead.” Macron was also privately reprimanded by German Chancellor Angela Merkel for his comments.

Of course, Macron was merely using different words to make the same observation that Trump has made many times in the past—that NATO is “obsolete.” The dispute led to much discussion about the purpose and future role of NATO, and attention inevitably turned to the EU’s plans for a “defense union”—something that many fear is an attempt to replace NATO.

What that “defense union” is depends on who you ask. The French, who have always been NATO-skeptic, say it is needed because Europe needs the capacity to defend itself without American support. The Germans say it is merely a cost-saving exercise meant to stop duplication of efforts between EU countries and improve the efficiency of military procurement. And the British, Polish, and Americans believe it is a French plot to destroy NATO and build an “EU army.”

It has fallen to von Der Leyen to explain what exactly it is. Under her leadership, the commission is creating its very first Directorate-General (DG) for Defense, Industry, and Space, to be presided over by Margaritas Schinas, the vice president for promoting (originally “protecting”) the European way of life.

The Language of Power

“Europe must also learn the language of power,” von der Leyen said during a speech on European policy in Berlin last month. “On the one hand, this means building our own muscles where we’ve long been relying on others—for example in security policies.”

The European Commission already deals with some defense and security matters, but they have never before been organized into one department. The new DG is expected to be complete next year. Its stated main purpose is to efficiently manage the €13 billion European Defense Fund. But many believe its powers will be steadily expanded over time.

Not everyone is so enthusiastic about this surge of military spending. In their budget proposal, the Finns have drastically cut the commission’s envisioned defense spending. Von der Leyen says this is unacceptable. “If one is serious about this then one has to invest,” she said last week.

It appears that the battles in both the climate and defense fights are going to move to the ongoing negotiations over the EU’s long-term budget. As is often the case in politics, money makes the world go round.