Home On the New Silk Road On the “Middle Corridor,” China Is Largely Absent 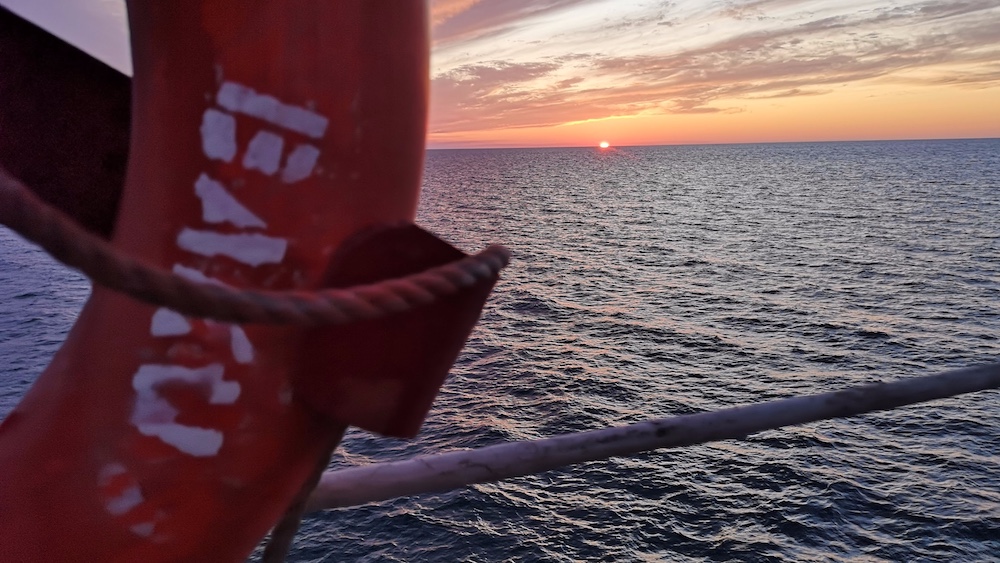 Linking China and Europe via the Caspian Sea, the “Middle Corridor” is one of the BRI’s six “official” corridor. But in the South Caucasus region, China is almost nowhere to be seen.

The Mercury II sank in 2002, leaving only eight survivors. So when I notice that I’m crossing the Caspian Sea on the Mercury I, I’m not exactly filled with confidence. The slot machine in the games room, which only takes Deutschmark, does nothing to alleviate my sense that this Soviet-era ferry has seen better days.

But the crossing is smooth. We leave the port of Baku in the early hours of Saturday morning, and after twenty two hours of glorious stars and mess-room meals with Ukrainian truck drivers, we arrive in Kazakhstan at the port of Kuryk.

This Caspian Sea crossing is an essential feature of the shortest route from China to the EU, otherwise known as the “Middle Corridor”—so called because it charts a middle passage between Russia in the North and Iran in the South. Some transport initiatives are more concrete than others. The EU’s trans-European transport network (TEN-T) program, for example, describes a specific list of studies and works funded by the EU. Like China’s Belt and Road Initiative (BRI), the Middle Corridor tends more toward the conceptual end of the spectrum. Although China’s BRI is far more complex, both the BRI and the Middle Corridor operate like slogans and are leveraged by various actors to tap into the zeitgeist of resurgent East-West overland connectivity.

Noticeable for Its Absence

The Middle Corridor is sometimes described as being a Chinese initiative, but Beijing’s role in recent Trans-Caspian and Caucasian infrastructure has been minimal. While “China-Central Asia-West Asia Corridor” is one of six official corridors of the BRI, its remit is vague, and it encompasses Iran rather than the Southern Caucasus. China is a party to the trans-Caspian agreement signed in 2013 between Kazakhstan, Azerbaijan, and Georgia, though despite frequent talk of synergy between “Turkey’s Middle Corridor” and the BRI, cooperation is limited to the signing of MoUs.

The long-planned Baku-Tbilisi-Kars (BKT) railway connection from Azerbaijan to Northeastern Turkey is the most important infrastructure project to have been completed along the Middle Corridor. It was inaugurated in October 2017 and, as I found out when I took a shiny new Stadler car heading West from Baku, the service recently opened to passenger traffic. The BKT is often associated with the BRI in official statements, but neither Chinese finance nor Chinese companies were involved. Beijing has also been largely absent from port developments around the Caspian Sea. The new ports of Baku and Kuryk are keen to stress their relevance to the New Silk Road, but China played no role in their development.

Georgia has good access to funds from international financial institutions (IFIs), and oil-rich Azerbaijan has enough money to pay for its own infrastructure—in fact, it also provided funds for the Georgian portion of the BTK. This self-sufficiency explains why Chinese funding might be absent from the Middle Corridor, but it doesn’t fully account for the shallow depth of China’s footprint. One plausible explanation is that Beijing isn’t convinced the Middle Corridor is viable.

I talk to an expert at an IFI in Baku who dismisses the Middle Corridor as “cumbersome.” As well as referring to the Caspian as a “lake with bad weather that they call a sea,” he also says that a lack of infrastructure and multiple border crossings mean the Middle Corridor can’t compete with the “main overland route through Russia.” As the crow flies, it may be the shortest route between Europe and China, but the middle corridor involves crossing five borders and transiting one or two seas, depending on where the cargo’s heading.

Multilateral institutions such as the Trans-Caspian International Transport Route (TITR) have been set up to coordinate trade, but linguistic, cultural, and legal differences make aligning customs procedures an uphill battle. As ever in the world of trade, “soft” institutional infrastructure is just as important as the “hard infrastructure” of railroads and port facilities. One Middle Corridor insider tells me he spends around 50 percent of his time waiting for signatures.

Thanks to the help of a good friend at the port, I arrive an hour before boarding, but most of the foreign travelers I meet at the Port of Baku have been camping there for at least a day. The boat leaves only when it’s full, sometimes once or twice a week, sometimes less frequently. If there’s bad weather at sea, as there often is, the boat goes nowhere. There is a lot of paperwork and hours of unexplained waiting involved in crossing the Caspian Sea. For Silk Road travelers with time on their hands, it’s a fun, if bemusing experience, but it’s not the easiest way to get from A to B.

In fairness, the port wasn’t built to service European thrill-seekers. The new cargo terminal is much more modern and efficient, and the ferry terminal is also scheduled for expansion. Yet the multi-day Caspian crossing does illustrate the problems faced by goods heading to and from China through the Middle Corridor. The overwhelming majority of trade between the EU and China is by sea, and for the small percentage of goods suited to the more expensive, but slightly quicker land routes, the Northern Corridor remains an easier option.

The Middle Corridor’s main appeal is that it bypasses Russia. Despite currently healthy Sino-Russian relations, Beijing likes to build redundancies into global trade networks. Diversification is the name of the game, and the Middle Corridor provides a good alternative route to Europe should problems arise along the Northern Corridor. While the route through Russia remains the cheaper option, the Middle Corridor is an insurance policy that’s probably low on Beijing’s list of priorities.

But the Middle Corridor isn’t all about end-to-end trade between China and the EU. When I visit ports, I tend to search for containers adorned with Chinese characters, which always provide easy photo opportunities. But at the Port of Baku, the starring role is played by a long train of fertilizer from Turkmenistan. Via Poti port in Georgia, the fertilizer will end up on the fields of Scotland. Onboard Merkury I, I talk to a Turkish truck driver who is hauling a cargo of heavy textile machinery, destined not for China but Kazakhstan. Because of a persistent global obsession with the BRI, stories about East-West connectivity often choose China as their main protagonist, but there are other markets and producers out there.

The Race for the Best Logistics Hub

The countries sandwiched between the European and Chinese markets are also capable of laying out their own plans for development. The Middle Corridor is partly led by a strong sense of competition between participating states. Every official I meet in every country I visit between the EU and China touts their country’s credentials as a regional logistics hub, and the race is on to establish the best facilities and the most preferential conditions for business.

As Eugene Seah, Chief Operating Officer at the Port of Baku reminds me: “We’re not just talking about transit, we’re talking about hubs—about building viable supply chains and being able to manufacture and export from Azerbaijan.” Alongside a tidy, hi-tech port facility that was inaugurated in 2018, the Port of Baku is also developing a colossal Free Trade Zone (FTZ) that officials hope will attract businesses to base operations in Azerbaijan. Shah says he has seen “strong interest” from Chinese parties but suspects that Beijing is playing something of a waiting game.

In the meantime, the Middle Corridor remains a firmly regional initiative. It faces serious obstacles to becoming an alternative China-EU route, but Trans-Caspian traffic can still flow without support from Beijing. In other words: China is big, and the BRI is important, but there’s a lot going on in the Southern Caucasus and Central Asia besides Beijing-sponsored initiatives.