Home Eye on Europe No Earthquake in Poland, But Some Shifts

The right-wing Law and Justice (PiS) party won re-election, but has a tricky four years ahead. At home, it will face an emboldened opposition. Internationally, though, there will be no major changes for now. 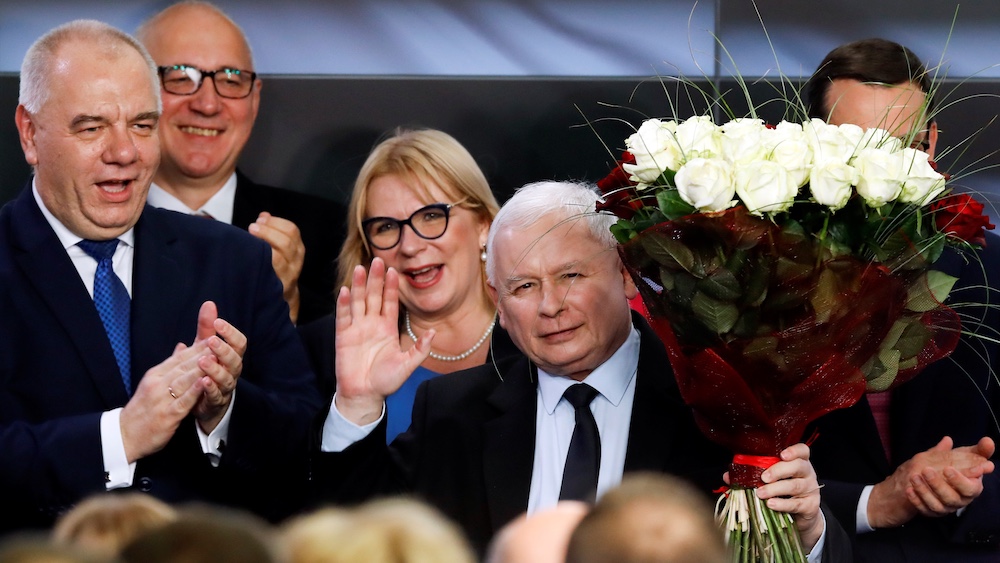 As expected, PiS won the Polish parliamentary elections on October 13, but not as well as it hoped to. “We received a lot, but we deserve more,” said party leader Jarosław Kaczyński after the exit poll was announced that evening. The party won 43.6 percent of the vote, which will give it 235 out of 460 seats in the Sejm, the lower chamber of parliament. This is enough for it to maintain its absolute majority and continue governing alone, but not by much.

After a disappointing result in the elections to the European Parliament in May, the opposition parties decided to run for the Sejm separately, as three blocs. The centrist Civic Coalition led by the Civic Platform (PO)—formerly headed by Donald Tusk until he left to become president of the European Council in 2014—won 27.4 percent of the vote, or 134 seats. The agrarians led by the Polish People’s Party (PSL) received 8.6 percent (30 seats), and the left 12.6 percent (49 seats). The fifth party to cross the electoral threshold of 5 percent was the far-right Konfederacja (“Confederation”), with 6.8 percent. It will have 11 seats.

These results will change the political landscape in the Sejm, adding new voices from the social-democratic left and the far-right. The left, which failed to cross the electoral threshold in 2015 (as a coalition, it needed 8 percent), is back—rejuvenated. The old Democratic Left Alliance ran together with two newer parties, Razem (“Together”) and Wiosna (“Spring”), the party founded earlier this year by gay-rights activist and former mayor of Słupsk Robert Biedroń. Contrasting with PiS’s social conservatism, the left supports gay marriage and the right to abortion.

The other newcomer to the Sejm is Konfederacja, an alliance of nationalist parties formed ahead of the European Parliament elections, in which it finished slightly below the threshold. Openly euroskeptic, the party is even further to the right than PiS. This is bad news for the ruling party: it will face pressure from the right in the Sejm and stronger competition for nationalist voters, especially young people. According to the exit poll, Konfederacja got almost 20 percent of the vote in the 18-29 age group. It was also more popular among men than women.

The opposition’s main victory—practical and symbolic—is the Senate. Unlike in the vote for the Sejm, the three opposition blocs made a pact for the upper chamber of parliament, agreeing not to run candidates against each other. Together, they will have a slight majority of 51 out of 100 senators. In practical terms, this will allow it to slow down (but not completely stop) the legislative process by amending or rejecting bills proposed by PiS in the Sejm. The symbolic dimension is perhaps even more important: it shows what the opposition parties can achieve by working together.

Since PiS came to power in 2015, politics has been dominated by the split between the party’s supporters and its opponents. Similarly, the election campaign was all about domestic issues. PiS successfully kept the focus on two main topics: its new welfare policies and so-called “LGBT ideology”, which it presented as a threat. Kaczynski positioned his party as the “protector of the Polish family” by creating what he calls the “Polish version of the welfare state” and shielding it against an “attack” by gay people.

European issues and the Polish government’s protracted dispute with the European Commission over the rule of law hardly featured in the campaign. The PiS leadership’s main reference to the EU, in the context of its economic policies, was to bringing “European standards of living” to Poland. In the run-up to the European elections earlier in May, the party had soften its rhetoric in response to the opposition’s accusations that it wants to lead Poland out of the EU. Its slogan in that election was “Poland heart of Europe.”

While its relations with Brussels and Berlin remained strained, the PiS leadership were keen to highlight Poland’s good relations with United States and, specifically, the Trump administration. On October 5, just before the elections, the US President Donald Trump announced that Poland had been formally nominated for the visa-waiver program that allows visa-free travel to US for up to 90 days, which Warsaw had wanted for a long time.

When the new government is appointed next month, this approach to foreign policy is likely to continue, while domestic politics will again dominate the agenda, as PiS focuses on implementing its welfare promises and fighting off the opposition. Politicians are already thinking about the next standoff between PiS and its opponents: the presidential election in 2020.

Despite the inward-looking tendencies in PiS, domestic and European politics will remain intertwined. Relations with Brussels will not improve overnight: the PiS government’s dispute with the European institutions over the rule of law remains unresolved. Moreover, with Brexit on the horizon, Poland will have to think once more about its place in Europe.