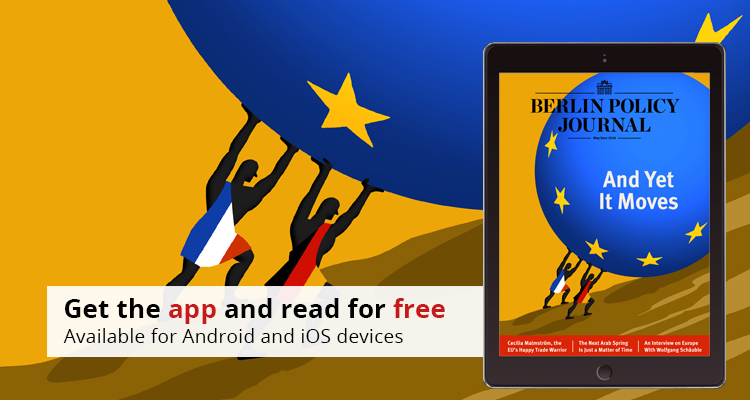 AND YET IT MOVES

The Status Quo Is Not an Option

The German government needs to forge compromises and build bridges. Stabilizing Europe is in its core interest.

“I Strongly Advise Against Arrogance”

Germany’s most experienced politician in European affairs on the state of the European Union and how to advance it.

Seeking the Force for Good

High time for the elites in France and Germany to rack their brains how to jointly take Europe forward.

Is Germany over-represented in European institutions?

Berlin wants to move toward a more integrated European defense policy. Given the sorry state of the Bundeswehr, this sounds hollow.

Under German leadership solidarity in the EU has become conditional on structural reforms.

Is the EU’s trade commissioner ready for a trade war?

With the May government deeply divided, it’s the remaining EU27 who determine the make-up of the future EU-UK relationship.

Viktor Orbán’s victory isn’t as clear-cut as it seems.

Ever since Swedish band ABBA won 1974, English has ruled supreme at the Eurovision Song Contest. But maybe not this time.

sebastian heilmann and guntram b. wolff

Germany needs to reduce its dependency on experts and push for robust European trade and industrial policies.

The next Arab Spring is just a matter of time.

Much has been written about Donald Trump ripping up the rules of world trade. Don’t believe the hype.