Ever since Swedish band ABBA won in 1974, audiences have shown a preference for English at the Eurovision Song Contest. Has American cultural imperialism infected Europe? Watch out for this year’s contest. 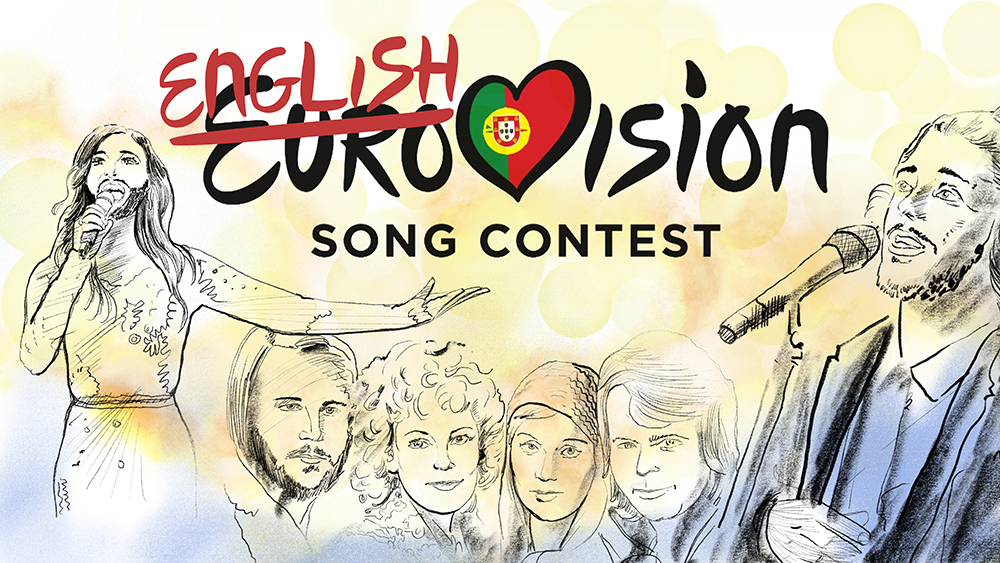 When Salvador Sobral won the Eurovision Song Contest representing Portugal last year with the song Amar Pelos Dois, a lot of people were caught off guard.

For one thing, Sobral’s gentle jazz waltz about unrequited love was not your usual Eurovision fare. At the grand finale in Kiev, an uncharacteristic hush fell over the arena when the Portuguese singer took to the stage. It may be that the song’s uniqueness is the reason it won—it stood out in a year in which the bookies’ favorites gave forgettable performances.

But Sobral’s win was also surprising because it was sung in Portuguese. Since 1999 countries have been allowed to sing in any language they like, and only one non-English song had won since then—Serbia’s Molitva in 2007. Many thought it was now impossible for a non-English song to win. Sobral proved them wrong.

Portugal is hosting this year’s contest in Lisbon on May 12. As expected, Sobral’s shock win has prompted a record number of non-English songs to be fielded in this year’s contest―14 out of the 43 entries. This is the highest number of non-English songs in the contest since countries were no longer forced to sing in their official national language 20 years ago. This development has delighted France, where politicians and broadcast executives have railed against the predominance of English in the modern contest.

Only France, Italy, Spain, and Portugal can be counted on to sing in their native language regularly. Curiously, it is only small countries that have dared to join them, generally two or three every year. Russia has never sung in Russian, and Germany has never sung in German since they were allowed to start singing in English in 2007—a track record that has drawn heavy criticism from Paris.

For France, this is about far more than just music. That countries have been so quick to abandon their native tongues after the rules were loosened, in the interest of doing well in the contest, is seen by some to be American cultural imperialism infecting a European contest. And it’s a long-standing grudge. It was at France’s insistence that countries were forced for decades to sing in their native language―even if they didn’t want to.

When the Eurovision Song Contest began in 1956, organizers did not think to specify a policy on languages. It was just assumed that each country would sing in its own language. That changed in 1965, when Sweden showed up to the contest with an entry in English. France was not amused. It convinced the Geneva-based European Broadcasting Union, which runs the contest, to impose a rule in 1966 requiring entries to be in an official language of the competing country.

Sweden, which wanted to continue singing in English, did not like the change. And so Stockholm immediately went to work trying to convince the other broadcasters in the EBU to scrap the rule. In 1973 it was successful, and the EBU decided to get rid of the native language requirement. One year later, Sweden fielded ABBA’s now-iconic song Waterloo, which won the contest. Whether it would have won if ABBA had sung it in Swedish, we can only conjecture.

In 1975 a song in English called Ding-a-Dong won for the Netherlands. In 1976, Brotherhood of Man’s song Save Your Kisses For Me won for the United Kingdom. By 1977, France was fed up. Three consecutive wins in English was more than some could take. After heavy pressure from Paris and others, the EBU re-introduced the language restriction in 1977. Directly after the rule change, France won with L’Oiseau et l’Enfant. The language restriction, which came to be derisively known as the “English ban,” would stay in place for more than two decades.

The rule stated that a country could sing only in an official national language, and that gave some countries more options than others. Switzerland could sing in German, French, Italian, or Romansh―though they usually chose French. Iceland could only sing in Icelandic. Spain, which had only recently thrown off the dictatorship that repressed all languages other than Castilian Spanish, was now forbidden from fielding a Eurovision entry in Catalan not by Madrid―but by the EBU. Only Malta, Ireland, and the UK were allowed to sing in English.

Tear Down This Linguistic Wall!

So what finally convinced France and the EBU to cave in? It was a string of almost uninterrupted wins ping-ponging between Ireland and the UK from 1992 to 1997. The only country to break the six-year English streak was Norway in 1995, with an instrumental song that had no lyrics.

The contest started to feel like an exclusively British Isles affair, and ratings were going down the toilet. Eurovision was feeling old and boring, completely out of touch with the modern pop music tastes of the day. The EBU realized it had to relax the rules if it wanted to revive the contest.

In 1999 France finally had to face its Waterloo. Countries were allowed to sing in whatever language they wanted. Not missing a beat, the first country to win after the rule change was Sweden with Take Me To Your Heaven, sung in English, which has become a Eurovision favorite.

It wasn’t just the language restriction that was ended that year. The EBU also got rid of the requirement for each song to have a live orchestra. This paved the way for modern-sounding pop songs. Ratings for the song contest shot up over the following decade, and it is now the most-watched live television event in the world―beaten only by the World Cup every four years.

But the boost in popularity wasn’t only because of the rule changes. It was also thanks to the new infusion of energy as Eastern European countries formerly behind the Iron Curtain eagerly joined. They brought with them a burst of enthusiasm that fundamentally changed the contest, throwing off its stuffy, old-fashioned image of the 1990s. Eurovision entries now sounded more like what is heard on European radio. And the reality is that songs on European radio are largely in English. Audiences wanted to vote for a song they could understand. By 2016, English accounted for 93 percent of Eurovision entries.

The ratings-watchers of national broadcasters may have liked the developments, but many linguistic purists have not. Many feel that Eurovision songs have become carbon copies of each other, without any cultural connection to the country that field them.

But does linguistic diversity automatically equal cultural diversity? The EBU has been keen to stress that this isn’t a folk music contest; it’s a pop song contest. And the reality is that even when Eurovision entries were sung in many different languages, they still sounded mostly the same.

Nevertheless, those who have bristled at the predominance of English in the modern contest will be pleased to see so many native-language entries this year. Aside from the usual culprits, the 14 countries that have chosen to take the plunge this year with non-English songs include Greece, Albania, Armenia, Georgia, Serbia, Slovenia, and Hungary. Estonia will be singing in Italian.

For a non-English win, the odds have never been greater since 1999. Yet with 31 wins―just under half of the total―English will still be hard to beat. France has 14 wins, but the last French winner was in 1988, and a song in French has never won in a contest where linguistic freedom was allowed. So don’t hold your breath―the bookies’ top three favorites to win―Israel, Czech Republic, and Bulgaria―are all in English.