Idlib threatens to be the next big flare-up in Syria’s civil war, with far-reaching consequences. Germany can play a decisive role in preventing a tragedy and paving the road to a sustainable peace. 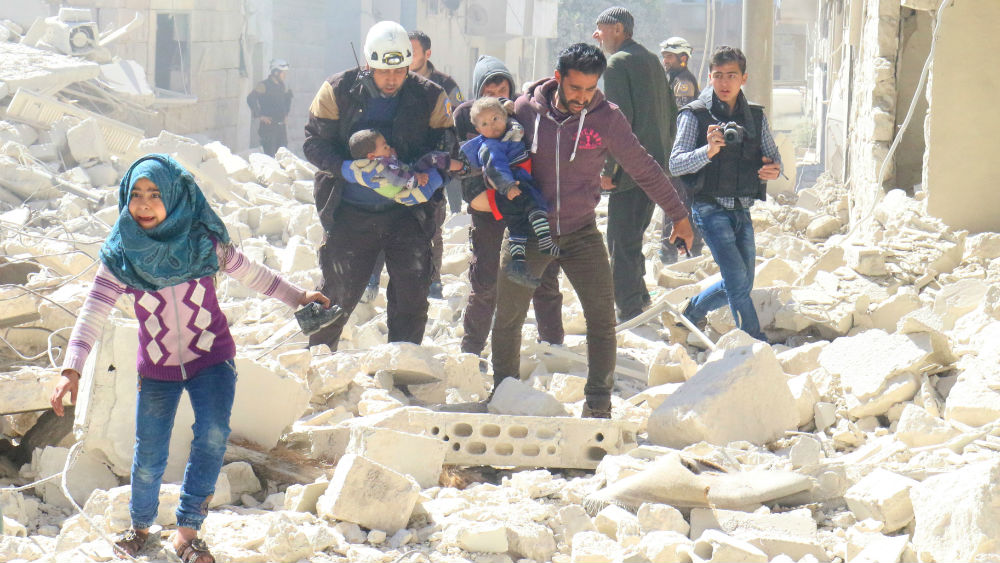 In April, the United States, the United Kingdom, and France hit Syria to punish Bashar al-Assad for what French President Emmanuel Macron called clear proof that the Syrian government had wielded chemical weapons in Douma, outside of Damascus.

While the US-led coalition launched their strikes, German Chancellor Angela Merkel supported her allies but did not join the operation—a decision that reflected Germans’ deep-seated pacifism and aversion to military missions in the post-war era. Still, her decision to publicly support the mission, but not join it, made it look like Berlin did not have the stomach to engage militarily itself.

Since the Syrian conflict began more than seven years ago, Germany has been caught in a conundrum. It is struggling to support fleeing Syrians while navigating a complex political terrain at home. It’s a conflict that has had very real consequences for  Merkel, with some one million Syrian refugees seeking asylum in Germany. It was the chancellor’s open-door policy in the summer of 2015, accepting those refugees stuck on the Balkan route, that led to a significant shift in Germany’s political landscape, reviving the right-wing populist Alternative für Deutschland (AfD).

And the war is far from over. Assad’s regime has regained control of most of the country, displacing half of the population in the process. Now, another flare-up is looming in Idlib, one of the areas that remains out of the government’s grasp. Syria observers fear another catastrophe is imminent, one that would have further consequences for Berlin.

Idlib, in the north of the country, is one of the last remaining strongholds for opposition forces. It is home to 2.5 million Syrians. A serious attack on Idlib is a question of when, not if. The war is set to escalate in the province, and Germany may have more Syrians at its doorstep once Assad begins his quest to take it back. Among the thousands of Syrians who were displaced from Ghouta, many told me in phone conversations that they are already trying legal and illegal avenues to reach Germany.

It’s worth looking at the complex situation on the ground. Myriad groups are competing for control of Idlib. The Free Syrian Army, made up of several smaller alliances, is locked in a fierce battle for control with the Islamist extremist Hayat Tahrir al-Sham, or HTS, a group that was previously known as Jabhat al Nusra and was allied with Al Qaeda.

HTS dominates Idlib and has imposed a harsh social code on people living there; it poses a vital threat to civilians who moved there to escape Assad’s clutches and sought safety near Turkey. And Russia, Assad’s ally, will use the presence of HTS in the region, and the group’s former ties to Al Qaeda, to justify an eventual regime offensive in Idlib.

Germany’s Time to Step Up

If Chancellor Merkel does not want to put boots on the ground in Idlib or threaten Assad militarily, what can Germany do to avoid the devastation waiting to unfold in Idlib?

Germany can come in and play an active diplomatic role in encouraging Turkey to rein in the jihadis just across its border, either by using its existing channels of communication or military force. Ankara’s relationship with the jihadis is ambiguous; in the early stages of the Syrian war, Istanbul was accused of supporting the Islamists in Syria, but of late President Recep Tayyip Erdogan, who got reelected on Sunday, appears more willing to limit their influence.

If Turkey fails to reach some sort of agreement with the Islamists, Ankara could opt for pushing the jihadis out with force. It might well have an interest in doing so. The proximity of Idlib to Kurdish-controlled areas on Turkey’s borders makes it an important location for Ankara’s strategic interests. Erdogan is in a position to better manage secessionist Kurds if the Free Syrian Army is in charge rather than the HTS. Without HTS in Idlib, the regime and the Russians wouldn’t have a pretext to bomb the region. Turkish forces are already in Idlib anyway, operating observation posts in rebel areas to assure a stake in region after the war ends.

There are other reasons why bold action might serve Turkish interests. Turkey, already home to three million Syrian refugees, has all but shut its doors to accepting more asylum seekers. In the event of a fresh offensive by Assad’s forces, millions of Syrians would be forced to knock on Turkish doors before they seek entry to Europe. In turn, Berlin can add its voice to calls from Washington and Istanbul to allow Free Syrian Army groups to take control of the province.

Even so, these measures might not be enough to stop Assad. He is quite likely to go ahead with the attack on Idlib in the name of Syrian sovereignty. One man who can stop him is Russian President Vladimir Putin. And the Russians might have a stake in containing Syria’s Islamist forces as well. Moscow believes hundreds of Russians joined ISIS and HTS and fear their return may present dangers back home.

What’s more, Berlin has professed its willingness to play a constructive role in the Syrian crisis. Idlib can be a test case for German diplomacy. If the Germans won’t talk to Assad they must talk to Putin. German-Russian relations have been strained by Moscow’s annexation of Crimea and cyber attacks linked to Russian hackers, but Merkel is the Western leader that always kept communications open with the Kremlin and knows Putin best. She should make the case to Russia that Idlib is crucially important as a safe zone for Syrians escaping regime-held areas.

Germany can attempt to save millions by exercising its leverage through tactful foreign policy. In my conversations with Syrians and senior Syrian government officials, Berlin has emerged as a fair player for both pro-regime and anti-regime camps. The rebels have told me they are grateful for the welcome many refugees have received in Germany, while pro-regime Syrians say Berlin has remained a moderate voice in criticizing Assad’s government, at least compared to Paris, London, and Washington.

So far, however, it seems Germany will take a back seat and watch as the regime attacks Idlib. But, with its stature on the international stage, Germany should step up and use its diplomatic might to resolve the crisis. Merkel must move beyond empty statements that do little else than express a desire for peace.